The coccyx, or tailbone, is formed by a fusion of four vertebrae.

The axial skeleton includes the bones that form the skull, laryngeal skeleton, vertebral column, and thoracic cage. The bones of the appendicular skeleton (the limbs and girdles) “append” to the axial skeleton.

1. Skull Bones Protect the Brain and Form an Entrance to the Body. 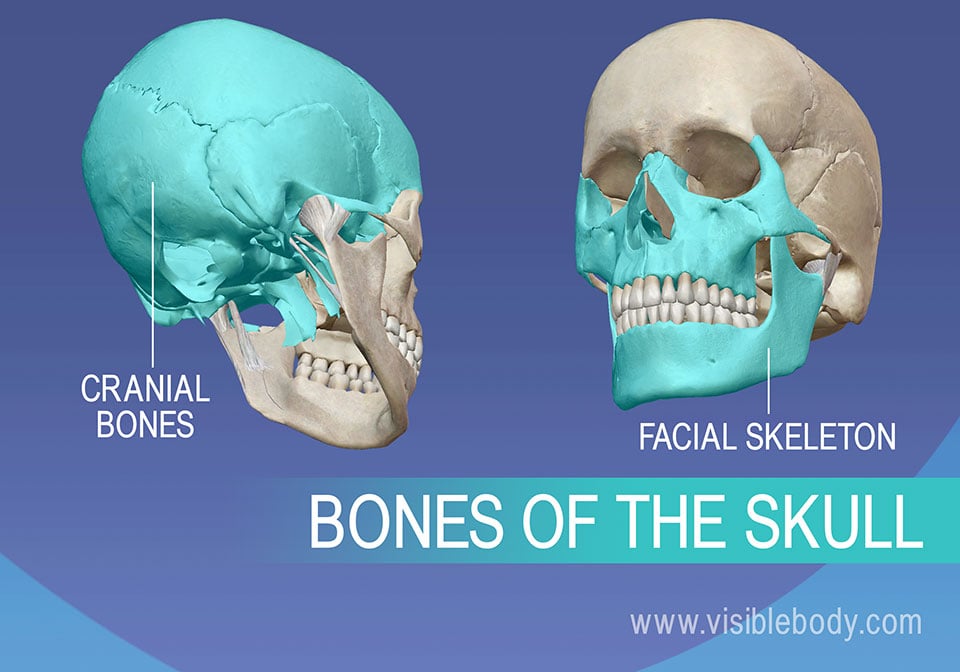 In fetuses and newborn infants, cranial bones are connected by flexible fibrous sutures, including large regions of fibrous membranes called fontanelles. These regions allow the skull to enlarge to accommodate the growing brain. The sphenoidal, mastoid, and posterior fontanelles close after two months, while the anterior fontanelle may exist for up to two years. As fontanelles close, sutures develop. Skull sutures are immobile joints where cranial bones are connected with dense fibrous tissue.

The four major cranial sutures are:

2. The Hyoid Bone, Laryngeal Skeleton, and Bones of the Inner Ear Are Commonly Categorized with Skull Bones

Bones of the Inner Ear

Inside the petrous part of the temporal bone are the three smallest bones of the body: the malleus, incus, and stapes. These three bones articulate with each other and transfer vibrations from the tympanic membrane to the inner ear.

The laryngeal skeleton, also known as the larynx or voice box, is composed of nine cartilages. It is located between the trachea and the root of the tongue. The hyoid bone provides an anchor point. The movements of the laryngeal skeleton both open and close the glottis and regulate the degree of tension of the vocal folds, which–when air is forced through them–produce vocal sounds.

3. The Bones of the Vertebral Column: The Vertebrae, Sacrum, and Coccyx 4. The Bones of the Thoracic Cage Protect Internal Organs The thoracic cage, formed by the ribs and sternum, protects internal organs and gives attachment to muscles involved in respiration and upper limb movement. The sternum consists of the manubrium, body of the sternum, and xiphoid process. Ribs 1-7 are called true ribs because they articulate directly to the sternum, and ribs 8-12 are known as false ribs.

Ancient jaw may hold clues to origin of human genus from Science News.

“Anatomy of the Newborn Skull” from Stanford Children’s Health.