Hips, Shoulders, Arms, and Legs: Bones of the Appendicular Skeleton Let’s take a look at the bones of the appendicular skeleton.

1. The Bones of the Shoulder Girdle See the bones of the shoulder girdle in 3D: 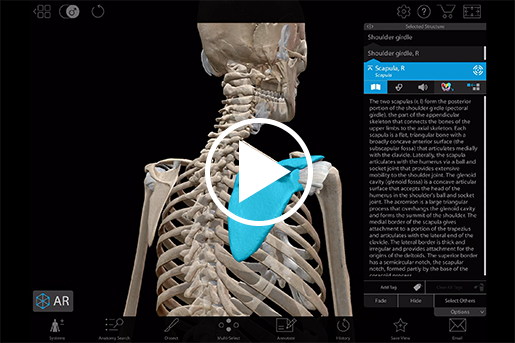 2. Bones of the Upper Limbs Wrist Bones. The wrist, or carpus, consists of eight carpal bones. One mnemomic to remember the carpal bones is the sentence: Some Lovers Try Positions That They Can’t Handle. The eight carpal bones of the wrist are the Scaphoid, Lunate, Triquetral, Pisiform, Trapezoid, Trapezium, Capitate, Hamate. 3. The Bones of the Pelvis The pelvic girdle is a ring of bones attached to the vertebral column that connects the bones of the lower limbs to the axial skeleton. The pelvic girdle consists of the right and left hip bones. Each hip bone is a large, flattened, and irregularly shaped fusion of three bones: the ilium, ischium, and pubis.

Female and Male Pelvis. The female and male pelvises differ in several ways due to childbearing adaptations in the female.

4. The Bones of the Lower Limbs The lower limbs include the bones of the thigh, leg, and foot. The femur is the only bone of the thigh. It articulates with the two bones of the leg–the larger tibia (commonly known as the shin) and smaller fibula. The thigh and leg bones articulate at the knee joint that is protected and enhanced by the patella bone that supports the quadriceps tendon. The bones of the foot include the tarsus, metatarsus, and phalanges. Foot Arches. The arches of the foot are formed by the interlocking bones and ligaments of the foot. They serve as shock-asborbing structures that support body weight and distribute stress evenly during walking.

An article on bone fracture repair from Healthline.

An illustration of the shoulder and hip from the 1918 edition of Gray's Anatomy of the Human Body.