Rotate the 3D model to see how the cervical canal connects the uterus and vagina. 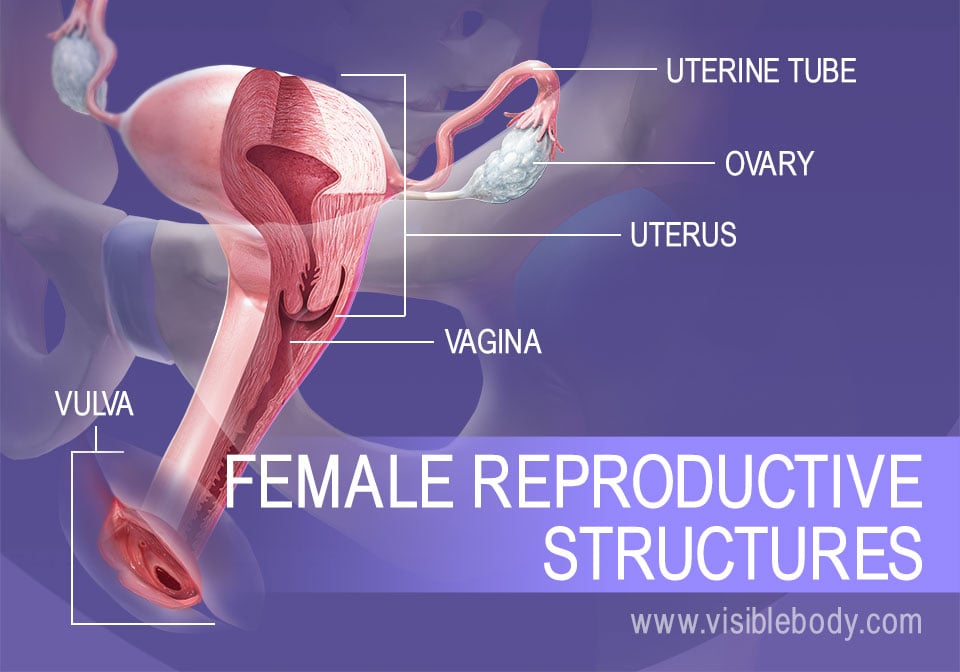 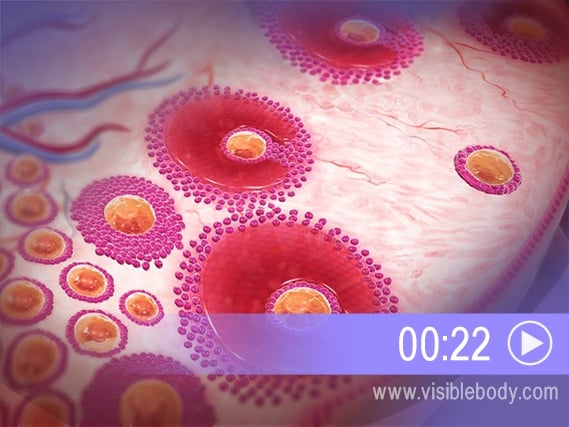 The ovaries are two almond-shaped structures that sit on either side of the uterus, connected to the uterine tubes. They produce oocytes (egg cells), as well as estrogen, progesterone, and other hormones. Egg cell production, or oogenesis, begins with the primordial follicles. As girls reach puberty, each ovary contains thousands of these follicles, and each follicle contains a primary oocyte. When follicles mature, some primary oocytes become secondary oocytes. By the time of ovulation there is only one mature follicle remaining. The rest of the follicles deteriorate. During ovulation (about once a month), the dominant follicle bursts and releases its secondary oocyte. The oocyte travels into the uterine tube, where it can be fertilized.

2. Egg Cells from the Ovaries Move Through the Uterine Tubes 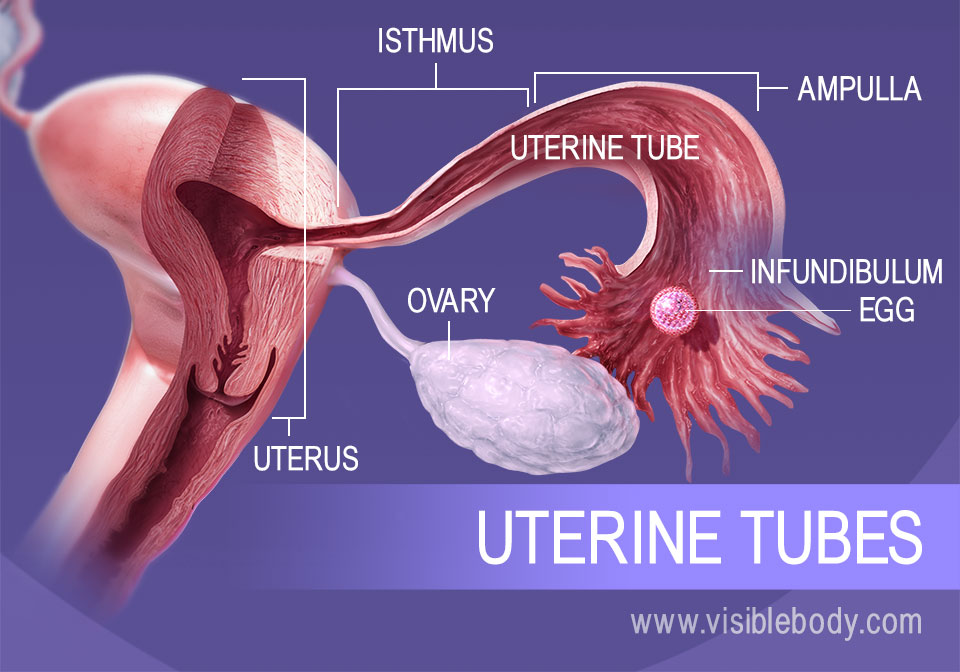 The uterine tubes (also called Fallopian tubes or oviducts) connect the ovaries to the uterus. The walls of each tube have an external serous layer, a middle muscular layer, and an internal mucous layer that is continuous with the inner lining of the uterus. Each uterine tube can be divided into three parts: The infundibulum is open to the abdomen. A constricted section called the isthmus connects with the uterus. Finally, an intermediate, dilated portion, the ampulla, curves over the ovary. Egg fertilization usually occurs in the ampulla. The eggs then travel through the isthmus into the uterus.

3. The Uterus Expands As an Embryo Becomes a Fetus 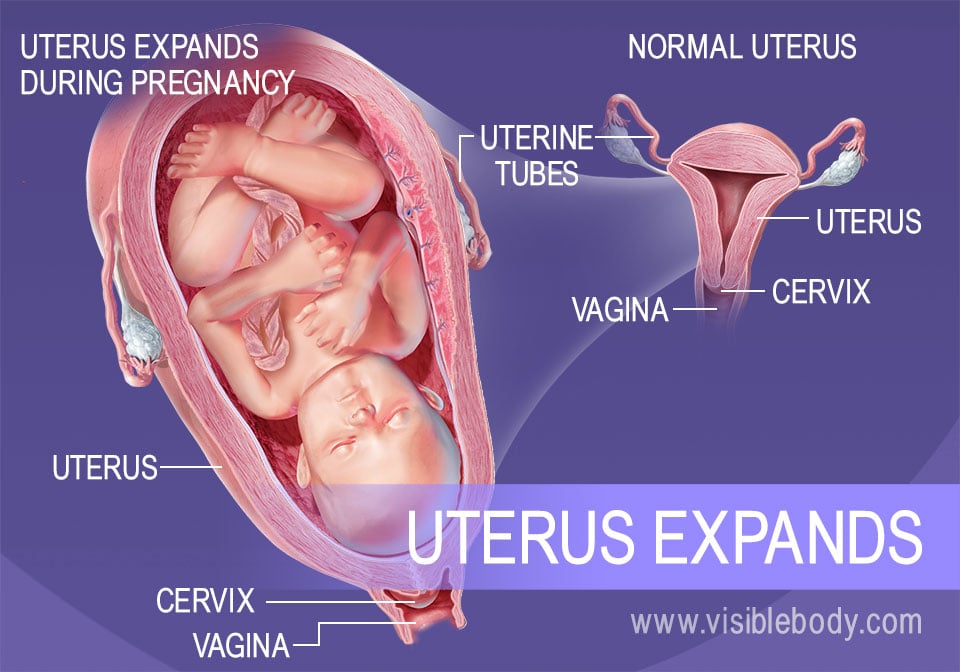 The uterus is a pear-shaped organ located in the pelvic cavity between the bladder and the rectum. It is a hollow organ with thick, muscular walls. The uterine tubes lead from the ovaries into the upper part of the uterus (one tube on each side). The lower part of the uterus constricts into a segment called the cervix, which leads to the vagina. During menstruation, the inner lining of the uterus is shed. When a woman becomes pregnant, however, the fertilized egg embeds itself in the uterine wall and menstruation is prevented. The uterus expands dramatically as the egg develops into an embryo and then a growing fetus.

4. The Vagina: A Tunnel with Three Core Functions 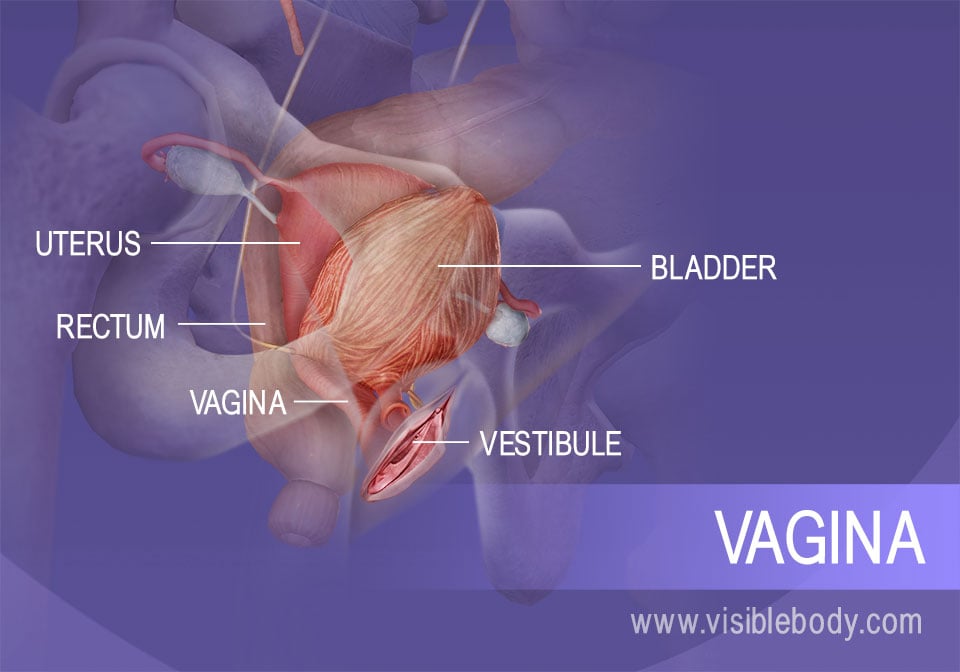 The vagina extends down from the cervix, the lower part of the uterus, to the vestibule, which is part of the vulva and the external genitalia. It sits behind the bladder and in front of the rectum. An inner mucous membrane lines the smooth muscle walls of the vagina. This lining, like the inner layer of the uterine tubes, is continuous with the mucous lining of the uterus. The vagina has three core functions: it carries menstrual flow outside the body, it receives the male penis during sexual intercourse, and it serves as a birth canal during labor. 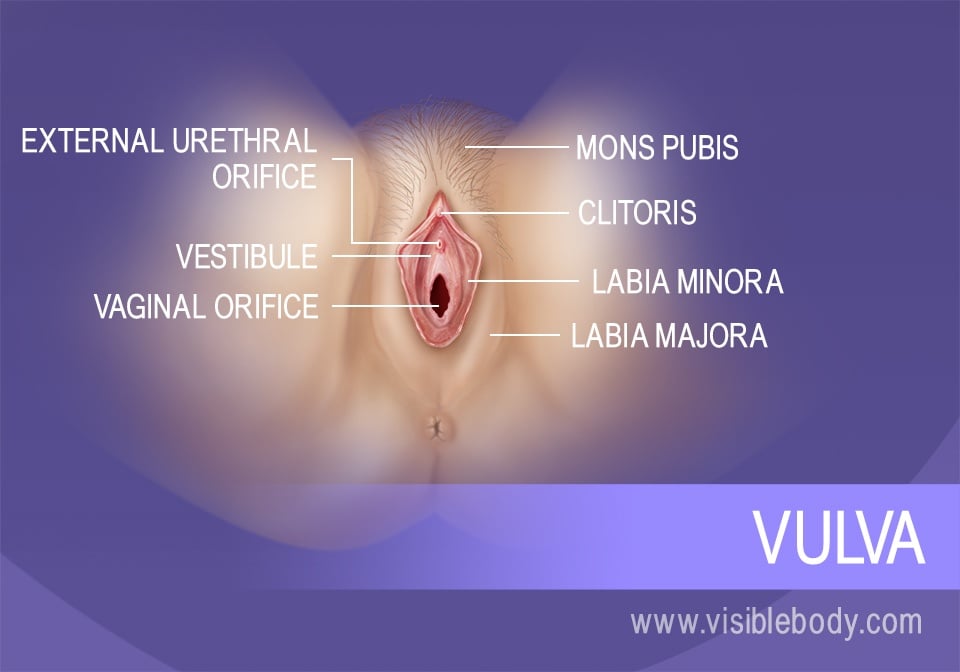 The structures of the vulva facilitate sexual intercourse and provide the entrance to and outlet for the internal genitalia. They include the labia minora and labia majora, the mons pubis, the clitoris, the greater vestibular glands, and the vestibule of the vagina. The vestibule includes two openings: the smaller urethral orifice allows urine to exit (as part of the urinary system). The larger vaginal orifice is the entrance to the vagina.

FAQ about cervical cancer screening from the American College of Obstetricians and Gynecologists.