Zooming into Chloroplasts: Light-Dependent and Light-Independent Reactions of Photosynthesis

Within the chloroplasts of a plant cell, photosynthesis occurs in two main phases: the light-dependent and light-independent reactions.

1. Chloroplasts have a complex internal structure, and different reactions take place in different parts of the chloroplast.

Understanding what the inside of a chloroplast looks like is key to visualizing where the different reactions of photosynthesis occur. 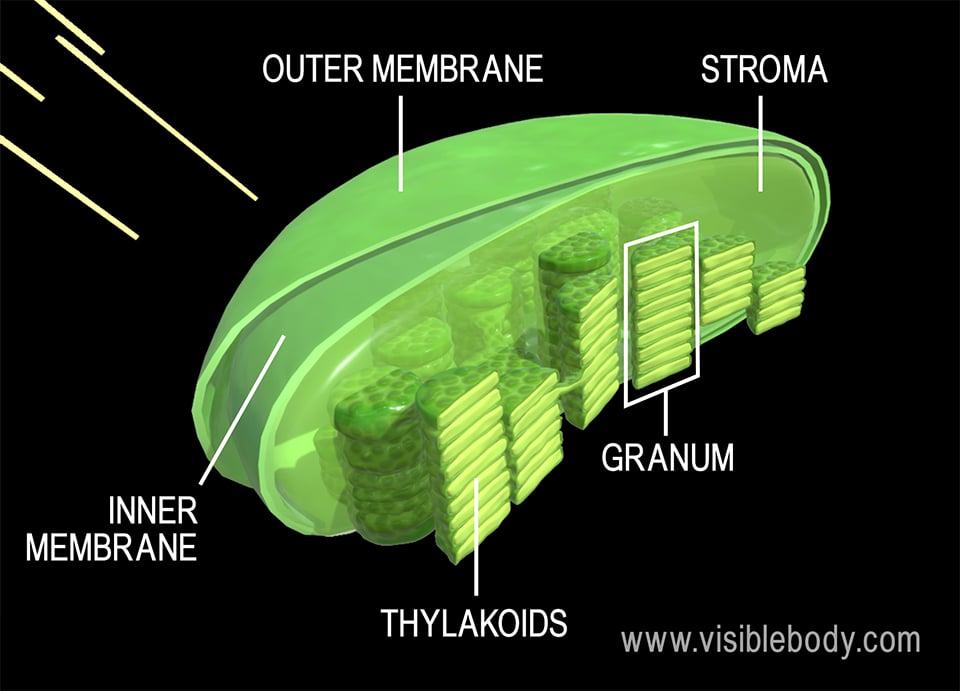 Interior to the chloroplast’s inner membrane and surrounding the thylakoids is a fluid called the stroma. The light-independent reactions of photosynthesis take place within the stroma. It contains enzymes that work with ATP and NADPH to “fix” carbon from carbon dioxide into molecules that can be used to build glucose. The chloroplast’s own genetic material (separate from that of the cell) is also stored in the stroma.

The interior of the chloroplast contains another membrane—the thylakoid membrane—which is folded to form numerous connected stacks of discs. Each disc is a thylakoid and each stack is a granum (pl. grana). 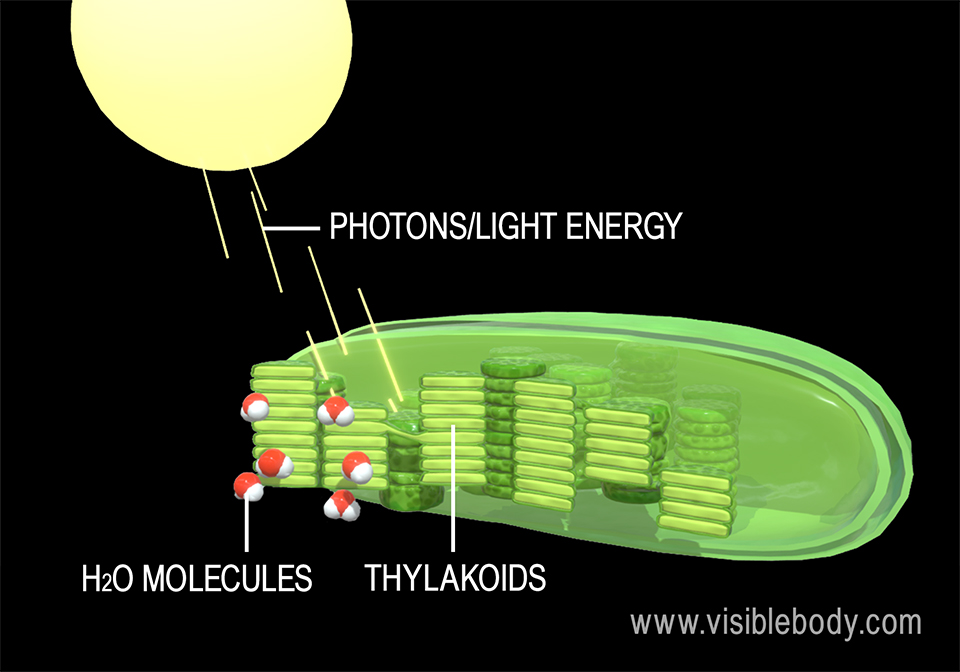 Then, something amazing happens—photosystem II splits a water molecule to restore this lost electron and fill the “energy vacuum” that has been created. This is a process humans haven’t been able to replicate exactly in a lab!

Each water molecule breaks down into two hydrogen (H) atoms and one oxygen (O) atom. The oxygen is released as a waste product—oxygen atoms from disassembled water molecules join up in pairs to form oxygen gas (O2).

The hydrogen ions build up in high concentration in the lumen of the thylakoid. They pass through an enzyme called ATP synthase, and their movement provides the energy needed to add a third phosphate to ADP (adenosine diphosphate) to form ATP (adenosine triphosphate). This energy-storing molecule powers many cellular processes. In fact, the glucose made during photosynthesis is broken down to produce more ATP later, during cellular respiration.

Meanwhile, the electron released from photosystem II arrives at photosystem I, which also contains chlorophyll. Energy from the sun excites the electron again, giving it enough energy to pass across the membrane and into the stroma, where it joins with a hydrogen ion and an NADP+ to create the energy-carrying molecule NADPH.

ATP and NADPH move from the thylakoid into the stroma, where the energy they store is used to power the light-independent reactions. 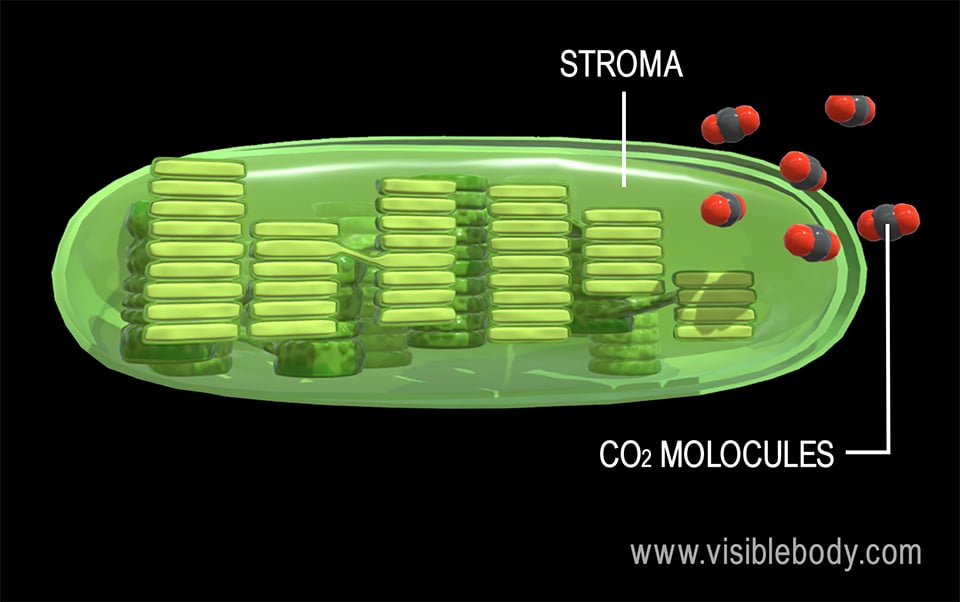 The ultimate goal of the light-independent reactions (or Calvin cycle) is to assemble a molecule of glucose. This is the part of photosynthesis that requires the CO2 the plant gets from the air.

Essentially, the plant needs the carbon from the CO2 to create the building blocks for glucose. An enzyme in the stroma called ruBisCo combines a five-carbon molecule of RubP (ribulose biphosphate) with a molecule of carbon dioxide. This creates a six-carbon molecule that is broken down into two three-carbon molecules (3-phosphoglycerate). This part of the light-independent reactions is referred to as carbon fixation.

Then, the energy carriers from the light-dependent reactions make their contribution. ATP and NADPH give each 3-phosphoglycerate a hydrogen atom, creating two molecules of the simple sugar G3P (glyceraldehyde-3-phosphate). Ultimately, these two molecules of G3P are used to build one molecule of glucose. This part of the light-independent reactions is typically referred to as reduction (or reducing the sugar) because electrons are added.

It is important to note that the Calvin cycle typically uses six molecules of carbon dioxide at a time. This means that twelve molecules of G3P are generated. However, only two of them are used to produce a molecule of glucose—the rest are recycled back into RubP so that the cycle can keep running.

Article from Scitable that details the internal structure of chloroplasts.

A chapter on chloroplasts and photosynthesis from OpenOregon’s Principles of Biology.

A visual aid detailing the steps of the Calvin cycle from National Geographic.

A video about the Calvin cycle from TED-ed.