No Nucleus? No Problem: Red Blood Cells and Platelets

Hemocytoblasts, or multipotent hematopoietic stem cells, give rise to myeloid stem cells, which differentiate into myeloblasts, megakaryocytes, and red blood cells (erythrocytes). Red blood cell production is regulated by the hormone erythropoietin, which is produced by cells in the kidneys and liver.

Unlike most other eukaryotic cells, mature red blood cells don’t have nuclei. When they enter the bloodstream for the first time, they eject their nuclei and organelles, so they can carry more hemoglobin, and thus, more oxygen.

Each red blood cell has a life span of around 100–120 days. Old, dead, or damaged red blood cells are engulfed by phagocytic cells in the liver, spleen, and lymph nodes. The iron from these cells is subsequently recycled to produce new hemoglobin.

2. Red blood cells produce a protein called hemoglobin, which helps them carry out their primary function—transporting oxygen from the lungs to the body’s tissues.

Hemoglobin is the protein that makes it possible for red blood cells to carry oxygen. Each molecule of hemoglobin is made up of four protein chains. Each chain has a heme group that contains an iron atom. Oxygen can bind to these iron atoms, which means that one molecule of hemoglobin can carry four oxygen molecules. The bond between oxygen and the iron contained in hemoglobin’s heme groups is what makes oxygenated blood red.

In the lungs, the hemoglobin in the red blood cells picks up oxygen. Then, the heart pumps the oxygenated blood out through the aorta, moving it through arteries and capillaries to reach the body’s tissues.

When inhaled, carbon monoxide (CO) binds to hemoglobin’s heme groups. When this happens, it prevents oxygen from binding to the heme groups, and therefore, the hemoglobin can’t carry oxygen to the body’s tissues. As a result, carbon monoxide poisoning can cause permanent damage to the brain and/or heart, and it can be fatal.

Like red blood cells, platelets are derived from myeloid stem cells. Some of these stem cells develop into megakaryoblasts, which give rise to cells called megakaryocytes in the bone marrow. After a megakaryocyte has matured, pieces of its cytoplasm break away into cell fragments called platelets. A single megakaryocyte can produce 1000–3000 platelets. Because they are not cells, platelets don’t have their own nuclei. However, they do contain numerous granules (or vesicles).

The hormone thrombopoietin, produced by the liver and kidneys, regulates the production of megakaryocytes and platelets.

The life span of a platelet is about 10 days. Like red blood cells, old platelets are phagocytosed. Reserve platelets are stored in the spleen.

4. Platelets clump at sites of injury to prevent blood loss.

When a blood vessel tears, platelets adhere to the (damaged) blood vessel wall near the tear, forming a platelet plug. At this point, they change from their inactive to their active shape, and they empty the contents of their granules. 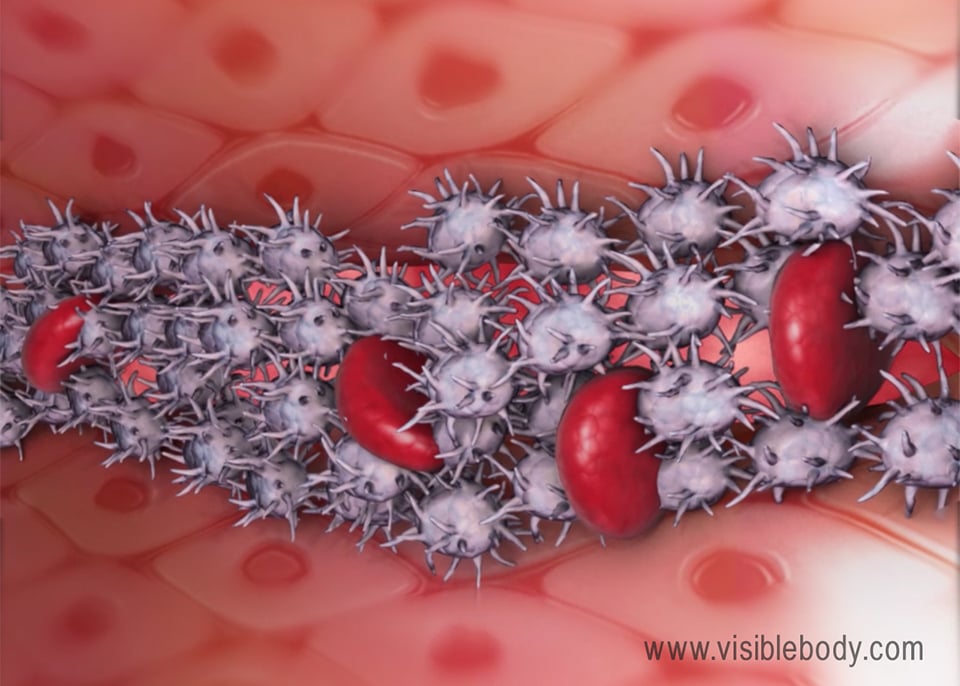 At the site of an injury, the platelets connect to one another and release chemicals that stimulate blood clotting. Proteins called clotting factors form fibrin threads that, together with the platelets, form a clot.

Articles about and visualizations of hemoglobin from Kenyon College and PDB-101.

Information about carbon monoxide poisoning from the Mayo Clinic.

Information about sickle cell anemia from the Mayo Clinic.

UCSB ScienceLine: Why is blood red?