DNA is the genetic material contained in the cells of living organisms.

DNA is one of the most important molecules in all of biology. From the simplest bacteria to the multicellular tissues and organs of the human body, DNA provides each living cell with instructions to make the proteins it needs to carry out its functions. DNA is essential to life as we know it, replicating itself and passing its genetic information from parent to offspring.

1. DNA is a double stranded helical macromolecule that contains the instructions for creating RNA molecules, peptides, and proteins.

DNA is a macromolecule, which means that it’s a molecule made up of smaller molecules. DNA consists of two separate strands, joined together in a double helix shape.

Each strand of DNA is composed of a long chain of nucleotides, which consist of a sugar, a phosphate group, and a nitrogen-containing base of cytosine, guanine, adenine, or thymine. Nucleotides on each DNA strand are joined by covalent bonds, which form between the sugar of one nucleotide and the phosphate of the next nucleotide, forming a sugar phosphate backbone. The two DNA strands are joined by hydrogen bonds that bind adenine with thymine and cytosine with guanine in a process called base pairing.

When we say that DNA contains the instructions for life, what do we mean? DNA is like a recipe book with many different entries. These are the genes, specific regions along a strand of the DNA molecule that have particular sequences of nucleotides.

These sequences are “read” by an enzyme called RNA polymerase. RNA polymerase uses a sequence of nucleotides on one strand of a DNA molecule to assemble free nucleotides into a strand of RNA. This process is called transcription. For protein production, the type of RNA produced is messenger RNA, or mRNA, which leaves the nucleus and enters the cytoplasm. Then, the strand of messenger RNA works with molecules of tRNA and a ribosome to string amino acids together into a protein. This process is called translation.

A single cell can contain a lot of DNA—for example, human cells contain around 2m (6ft) of DNA each—so DNA is usually tightly coiled up or compressed and stored in structures called chromosomes. The chromosomes in prokaryotic cells and eukaryotic cells differ in several key ways.

In eukaryotic cells, chromosomes are located in the nucleus. The DNA within each chromosome is tightly coiled around clusters of histones, basic proteins found in the cell’s nucleus. Before a cell divides, each chromosome makes a copy of itself. The replicated chromosome consists of two sister chromatids, joined together lengthwise with their strongest connection at the centromere.

In contrast to eukaryotic cells, prokaryotic cells only have one chromosome each. This chromosome resides in a region of the cytoplasm called the nucleoid and contains a DNA molecule compacted by a series of nucleoid-associated proteins (NAPs).

3. DNA is replicated before cell division, so the same genetic material can pass from parent to offspring.

For example, since human cells have 23 different types of chromosomes, each cell receives 46 chromosomes, and after DNA replication, each cell has 92 chromatids. When a human somatic cell undergoes mitosis, or cell division, the sister chromatids separate, resulting in two daughter cells with 46 chromosomes each. 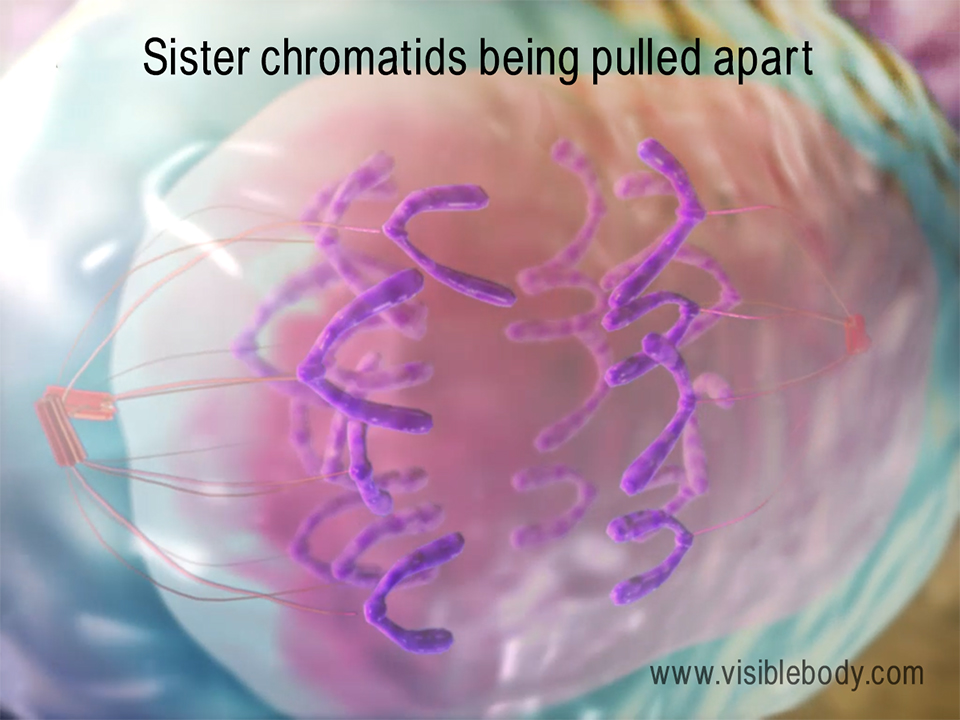 In organisms that reproduce sexually, the gametes (reproductive cells like eggs and sperm) are haploid cells. This means they have only one copy of each chromosome—23 individual chromosomes, instead of 23 homologous pairs. Gametes are produced via meiosis, a process in which an original diploid cell divides into four haploid daughter cells.

Most prokaryotic cells reproduce via cellular fission. During this process, the cell’s one chromosome makes a copy of itself, so each new cell gets a copy of that chromosome.

A video about DNA structure and replication from Crash Course Biology.

A video by the Amoeba Sisters about chromosomes and cell division.