1. White blood cells are larger than red blood cells, but they make up a smaller percentage of the blood.

Red blood cells are constantly circulating throughout the body, carrying oxygen from the lungs to the body’s tissues. In contrast, white blood cells aren’t always on the move. Most leukocytes spend a short time circulating in the blood, and the rest of the time, they can be found within lymphatic tissues or organs like the thymus or spleen. When infection or inflammation occurs, white blood cells move where they’re needed.

Granules are particles in a cell’s cytoplasm that show up as small spots when the cell is examined through a microscope. They are often secretory vessels.

3. Neutrophils are phagocytes that make up 60–70% of circulating white blood cells in peripheral blood.

Neutrophils are the most numerous granulocytes, making up a large percentage of the leukocytes found in human blood. They get their name from the fact that they show up as a neutral pink when a hematoxylin and eosin (H&E) histological stain is used. In neutrophils, the granules are small and evenly distributed, and they appear pale lilac in color when they absorb basic or acidic dyes.

Like other granulocytes, the nuclei of neutrophils are segmented into several connected sections, or lobes. Because of this, granulocytes are often referred to as polymorphonuclear leukocytes (PMNs). Most neutrophils have between two and five lobes that vary in shape.

Neutrophils play a significant role in the innate immune response, often being the first, and most numerous, type of white blood cell to arrive at sites of infection or inflammation. They are phagocytes, meaning they engulf and destroy pathogens via a process called phagocytosis. Their granules contain hydrolytic enzymes and antimicrobial proteins that break down engulfed pathogens, such as bacteria. 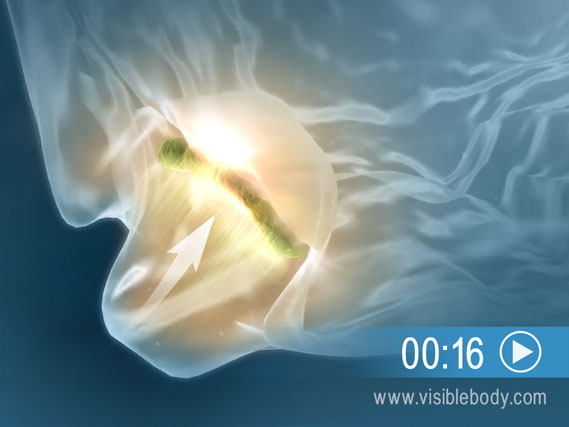 4. Basophils are numerous at sites of allergic and inflammatory reactions.

Basophils are the least numerous type of white blood cell, making up only 0.5–1% of all circulating white blood cells in peripheral blood. They get their name from the fact that they are best viewed using a stain with a basic pH. Their large, coarse granules obscure the nucleus, and they show up as a dark purplish-black when they absorb basic dyes. 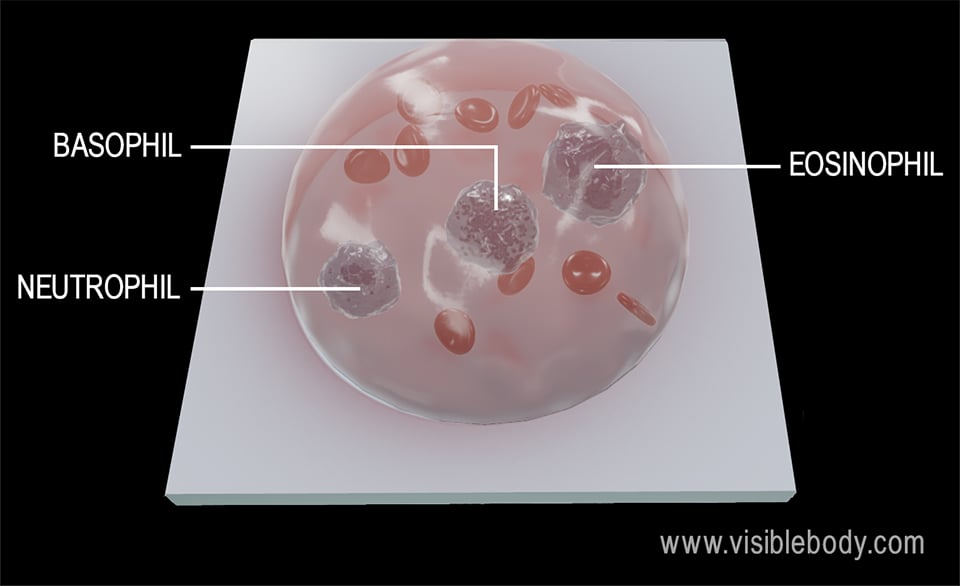 The nucleus of a basophil typically has 2–3 lobes that form an S or a U shape.

Basophils are key players in allergic and inflammatory reactions. Their granules contain histamine and heparin, which are released to promote blood flow to the area. Histamine is a vasodilator, which means it dilates, or widens, blood vessels. Heparin is an anticoagulant, which means it prevents blood from clotting. Their granules also release chemicals that attract other white blood cells to the area.

5. Eosinophils attack parasites and combat the effects of histamine.

Eosinophils make up 1–3% of circulating white blood cells in peripheral blood. They get their name from their “affinity” for acidic dyes, such as eosin. When an eosinophil’s large, uniform-sized granules absorb acidic dye, they are stained a bright red-orange color.

The nuclei of eosinophils have two lobes connected by nuclear material.

Eosinophils are found in the loose connective tissue of the skin and the intestinal and respiratory mucosa. When activated, their granules release digestive enzymes that attack parasites. Eosinophils can modulate inflammatory responses by combating the effects of histamine, but they can also cause tissue damage in allergic responses.

A chapter on leukocytes and platelets from Oregon State’s Open A&P Textbook.

An article on eosinophils from the British Society for Immunology.