1. Evolution is the process by which the characteristics of populations change over time. It also gives rise to new species.

Life on our planet began with single-celled organisms and now encompasses everything from bacteria to fungi to plants and animals—about 8.7 million different species of living organisms. And that’s just the species alive today! Over the course of Earth’s history, there have been around 4 billion different species, most of which have gone extinct. Earth has changed, too—from the composition of its atmosphere (thanks for the oxygen, ancient cyanobacteria!), to the position of continents, to the climate.

So what has allowed organisms to adapt to changing environments and to look so very different from their ancestors? It’s actually quite challenging to describe the history and diversity of life on Earth without saying this word—evolution!

Evolution is the process by which populations change over time, adapting to their environment(s). Before we discuss how evolution works, it is important to remember that evolution occurs at the population level, not at the individual animal level.

Given enough time and a variety of evolutionary pressures, members of a species can become so different from their predecessors that they branch into new species. What is a species? For sexually reproducing organisms, a species is a group of individuals that can potentially mate and produce fertile offspring.

We can use a branching diagram called a cladogram to examine the relationships between modern species based on particular shared features. Cladograms also show hypothetical or known common ancestors of modern species. 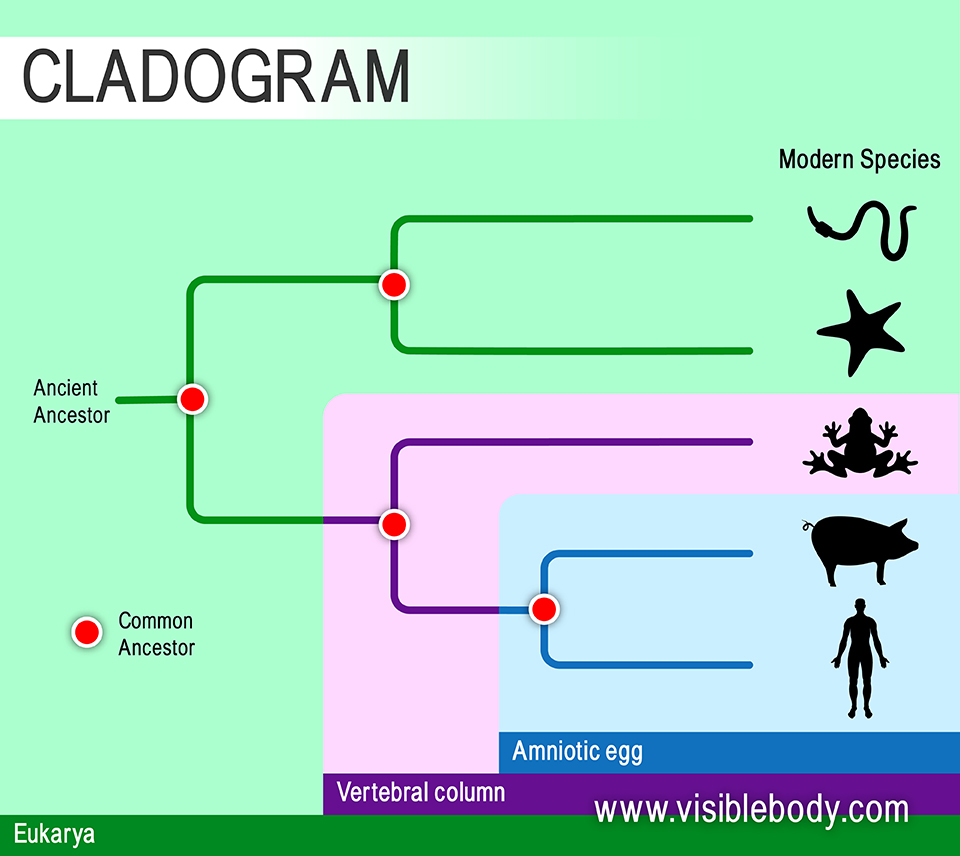 From 1831 to 1836, Charles Darwin traveled aboard the HMS Beagle as a naturalist, helping to survey the coast of South America. The last stop on this voyage was to the Galápagos Islands, located in the Pacific Ocean, west of Ecuador. Here, he observed that there were various species of ground finches that looked quite similar to each other and to a particular species of finch from the mainland. However, they had a graded range of different beak shapes and sizes. He later theorized that the Galápagos finches might have descended from the mainland finches and that their differences in beak shape were adaptations that developed over time based on the food sources available to different species on different islands.

Charles Darwin’s 1859 book, On the Origin of Species, laid out the basic principles of natural selection, forming the basis for our current understanding of evolution. Essentially, natural selection is the idea that organisms will survive and reproduce if they have traits that give them an advantage when competing for limited resources. They then pass those advantageous traits on to their offspring. Over generations, these traits will become more prevalent in the population as a whole.

Darwin wasn’t the only 19th-century naturalist to theorize about how species change over time. Alfred Russell Wallace, one of Darwin’s contemporaries who studied insects in Brazil and the Malay Archipelago, came to essentially the same conclusions based on his own observations. In fact, they presented their ideas on natural selection together at the 1858 meeting of the Linnean Society.

3. Today’s understanding of evolution is informed by the principles of both natural selection and genetics.

Darwin and Wallace theorized that characteristics must be passed from organisms to their offspring, but how that worked wasn’t clear to scientists at the time. Today, we see Gregor Mendel, whose work was published in 1866, as the “father of modern genetics.” However, until the 20th century, scientists didn’t see Mendelian genetics as compatible with Darwin and Wallace’s perspective on inheritance, which thought of characteristics as blended.

Today, we use the principles of Mendelian inheritance to explain how natural selection works. It’s common knowledge that the different traits we see in living organisms arise from their genetic makeup, with particular characteristics being associated with different genes (which we now understand to be segments of DNA that give the instructions for building proteins).

When talking about heredity and evolution, it’s important to distinguish between characteristics and traits. Let’s use Mendel’s pea plants as an example. Seed color is one of the characteristics he investigated—a general property of the pea plants that was associated with a particular gene. Yellow seeds and green seeds were the two traits he saw expressed in parents and offspring—these observable traits arose from variations of the gene for seed color.

In modern scientific terms, we say that genes have different variants, called alleles. These alleles underlie the traits we see. Similarly, we say that organisms have a genotype—their underlying sequence of DNA—and a phenotype—their observable traits.

Mendel found that some traits (like the yellow seeds) are dominant and others (like the green seeds) are recessive. Note that sexually-reproducing organisms get one copy of each of their chromosomes from their parents, which means that their genotype can include copies of different alleles. In traits that work according to Mendelian inheritance, the combination of dominant and recessive alleles in the genotype determines what trait will be expressed in the phenotype. For example, a pea plant with a copy of the allele for yellow peas and a copy of the allele for green peas in its genotype would have yellow peas in its phenotype, because yellow peas are the dominant trait.

Mutations, or changes to DNA, can sometimes lead to variations that help an organism survive. A mutation might also make an organism less likely to survive and pass on its genetic information, or it might have no effect on an organism’s likelihood to survive and reproduce. We also know that sexual reproduction and the process of homologous chromosomes crossing over during meiosis add to genetic diversity within a sexually reproducing population.

Population genetics is a specific field dedicated to studying how natural selection leads to a change in allele frequencies in populations over time.

The change in the coloration of peppered moths (Biston betularia) following the Industrial Revolution in England is an example of natural selection that humans have observed directly. (This example also shows how human activities can affect the environment and the organisms that inhabit it!)

All this changed with the advent of factories using coal power. Soot darkened the bark on the trees, making the dark-colored moths more difficult for predators to spot and eat. Thus, it was these moths that had the advantage in the polluted environment, and they were able to reproduce, making the allele for darker pigmentation more prevalent in the population.

Research on peppered moths and natural selection continued into the 20th century. In the 1950s, entomologist Dr. Henry Kettlewell’s research in England showed something interesting—there were more dark-colored moths near cities than there were out in the countryside, where pollution was not as much of an issue.

Crash Course Ecology #1: The History of Life on Earth

Crash Course History of Science #35: Genetics and the Modern Synthesis

Our World in Data: Extinctions