Plasma, the liquid portion of blood, makes up 55% of the total blood volume. The other components of blood are red blood cells, white blood cells, and platelets, which are suspended in plasma. Mostly composed of water, plasma also contains electrolytes—including sodium, chloride, and potassium ions—and several types of proteins—including albumins, globulins, and fibrinogens—that are produced by the liver. Plasma transports clotting factors, nutrients, hormones, and waste products throughout the body. It also plays an important role in maintaining blood pressure and circulation, body temperature, electrolyte balance, and body tissue hydration. See it in 3D!

Red blood cells (RBCs), also known as erythrocytes, make up 40–45% of the total blood volume. As they develop, they produce hemoglobin, a protein molecule that transports oxygen. Before red blood cells enter the bloodstream, they eject their nuclei and lose their organelles, allowing them to carry more hemoglobin, and thus, more oxygen. When they enter the bloodstream, they are oval or round biconcave discs. Their shape and structure facilitates their main function, which is transporting oxygen from the lungs to the body tissues. See it in 3D!

Platelets, also known as thrombocytes, are cell fragments that make up 2% of the total blood volume. They lack nuclei, but they have many granules, which contain chemicals that are released at injury sites to promote blood clotting. In their inactivated state, platelets are irregular disc-shaped structures. When they're activated, they become round with projections that allow them to connect to exposed collagen and other platelets. See it in 3D!

White blood cells (WBCs), also known as leukocytes, make up 1% of the total blood volume in healthy adults. Their numbers increase during infection or inflammation because their main function is defending the body against disease. White blood cells are categorized as either granulocytes or agranulocytes, depending on whether they contain specific staining granules in their cytoplasm. They can also be categorized based on the type of stem cells—myeloid or lymphoid—that differentiate to produce them. See it in 3D!

Neutrophils, basophils, and eosinophils all contain cytoplasmic granules and originate from myeloid stem cells, so they are classified as granular myeloid white blood cells. They are also known as polymorphonuclear leukocytes (PMNs) because their nuclei have multiple lobes. See it in 3D! 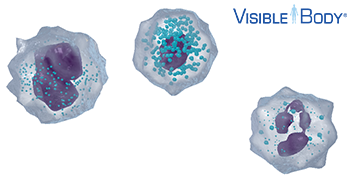 Granules are particles in a cell’s cytoplasm that show up as small spots when the cell is examined through a microscope. They are often secretory vessels. Granulocytes can degranulate—empty the contents of their granules—to carry out functions such as destroying or deactivating pathogens and regulating immune responses. See it in 3D! 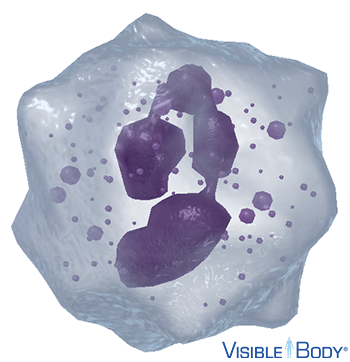 Neutrophils are the most abundant type of white blood cell, making up 60–70% of the total circulating white blood cells in peripheral blood. They have nuclei with two to five lobes that vary in shape, connected to each other by chromatin. They also have three types of small granules that are evenly distributed throughout the cytoplasm. These granules contain hydrolytic enzymes and antimicrobial proteins. Neutrophils play a significant role in the innate immune response, often being the first, and most numerous, type of white blood cell to arrive at sites of infection or inflammation. Through phagocytosis or degranulation, they inactivate, destroy, and digest pathogens. See it in 3D! 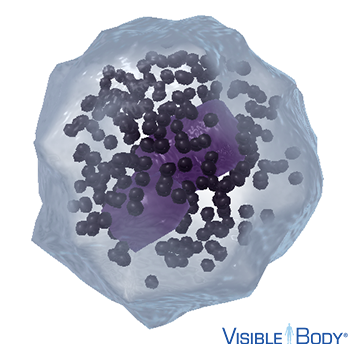 Basophils are the least abundant type of white blood cell, making up 0.5–1% of the total circulating white blood cells in peripheral blood. They have nuclei with two to three lobes that form an S or U shape. Their nuclei are obscured by their large, coarse granules that contain histamine and heparin. Basophils control allergic and inflammatory reactions by degranulating, releasing histamine to dilate the blood vessels, heparin to reduce blood clotting and maintain blood flow, and chemicals to attract other white blood cells. See it in 3D! 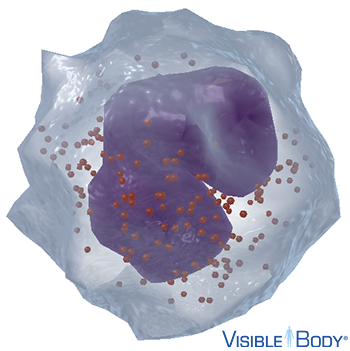 Eosinophils make up 1–3% of the circulating white blood cells in peripheral blood. They are found in the loose connective tissue of the skin and the intestinal and respiratory mucosa, as well as in the blood. Their nuclei have two lobes connected by nuclear material, and they can vary in shape, usually forming a U shape. Eosinophils have large, uniform-sized, acidophilic granules that contain digestive enzymes and proteins. When activated, they degranulate, releasing chemicals that attack parasites and help control allergic and inflammatory reactions by combating the effects of histamine. See it in 3D! 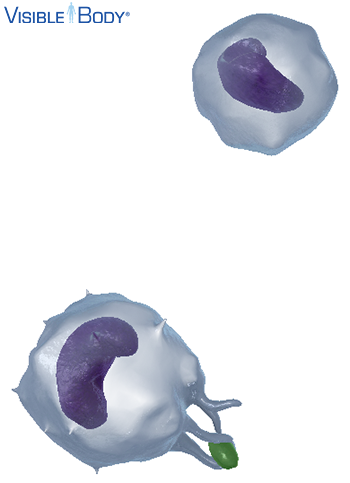 Monocytes are classified as agranular myeloid white blood cells because they originate from myeloid stem cells and they lack visible cytoplasmic granules. They are also classified as mononuclear leukocytes because their nuclei are not lobed. They are the largest type of white blood cell, and they make up 2–10% of the total circulating white blood cells in peripheral blood. Monocytes have large, indented nuclei (often kidney-shaped). They also have lysosomes that contain digestive enzymes, which they release to help the monocyte engulf and neutralize pathogens. Inactivated monocytes are spherical. See it in 3D! 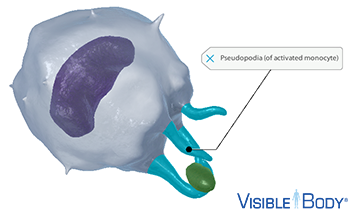 When monocytes are activated, they become irregularly shaped with projections called pseudopodia that engulf bacteria and other foreign substances. See it in 3D!

When monocytes leave the bloodstream and enter the tissues, they differentiate into macrophages, large phagocytic cells that defend the body from pathogens and remove debris from tissues. 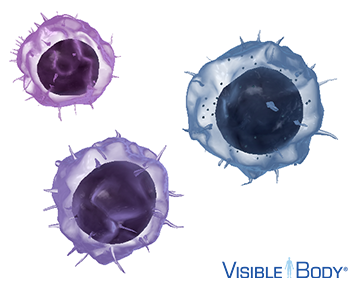 Lymphocytes have numerous fingerlike projections called microvilli that provide extra surface area for receptors on the plasma membrane and that become more numerous once the lymphocytes are activated. See it in 3D! 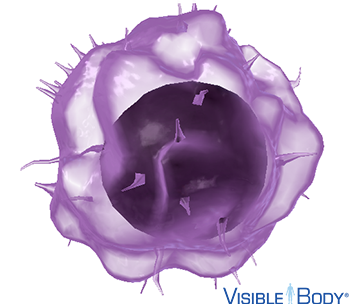 B cells play a major role in the body's adaptive immune response, controlling antibody-mediated immunity. They have large, spherical nuclei that are not lobed. Once B cells are mature, they move into the secondary lymphatic organs, where they are activated by the presence of antigens—any foreign substance outside of cells or a protein, peptide, or polysaccharide on the surface of a pathogen. Once activated, they multiply rapidly and then differentiate into plasma (effector) cells and memory cells. See it in 3D!

Memory B cells form during the primary immune response, but their main function is to remain after the infection is cured, so they can recognize the same type of antigen if it's encountered again and generate a secondary antibody-mediated response. 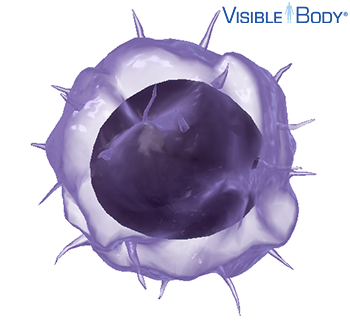 Cytotoxic T cells move throughout the body, identifying and destroying virus-infected cells and cancer cells, either via lysis—breaking down their cell membranes—or by inducing apoptosis—programmed cell death. They use cytokines to attract other cells to help with the immune response.

Regulatory (or suppressor) T cells release inhibitory cytokines to decrease the intensity of the immune response from other cells. They also help prevent autoimmune disease by helping to distinguish between the body's cells and invading cells.

Memory T cells form during the primary immune response, but their main function is to remain after the infection is cured, so they can recognize the same type of foreign cell if it's encountered again and generate a secondary cell-mediated response. 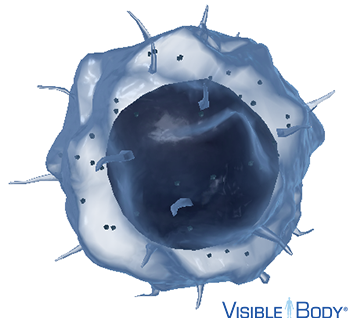 Natural killer cells (NK cells or large granular lymphocytes) play a major role in the innate and adaptive immune responses. They have small cytoplasmic granules and large, spherical nuclei that are not lobed. They are cytotoxic cells that identify virus-infected cells and tumor cells, penetrating them and releasing their toxic granules to destroy them. They also recognize antigens they've encountered before, and they generate a strong secondary response against these familiar antigens. See it in 3D!