Zooming in on DNA Structure

1. A molecule of DNA consists of two strands that form a double helix structure.

DNA is a macromolecule consisting of two strands that twist around a common axis in a shape called a double helix. The double helix looks like a twisted ladder—the rungs of the ladder are composed of pairs of nitrogenous bases (base pairs), and the sides of the ladder are made up of alternating sugar molecules and phosphate groups.

Molecules of DNA range in length from hundreds of thousands to millions of base pairs. The smallest chromosome in the human genome, Chromosome 21, has around 48 million base pairs.

A molecule of DNA has two strands, composed of nucleotides, that form a double helix shape.

2. Each DNA strand is composed of nucleotides—units made up of a sugar (deoxyribose), a phosphate group, and a nitrogenous base.

Each strand of DNA is a polynucleotide composed of units called nucleotides. A nucleotide has three components: a sugar molecule, a phosphate group, and a nitrogenous base.

The sugar in DNA’s nucleotides is called deoxyribose—DNA is an abbreviation for deoxyribonucleic acid. RNA molecules use a different sugar, called ribose. Covalent bonds join the sugar of one nucleotide to the phosphate group of the next nucleotide, forming the DNA strand’s sugar-phosphate backbone. 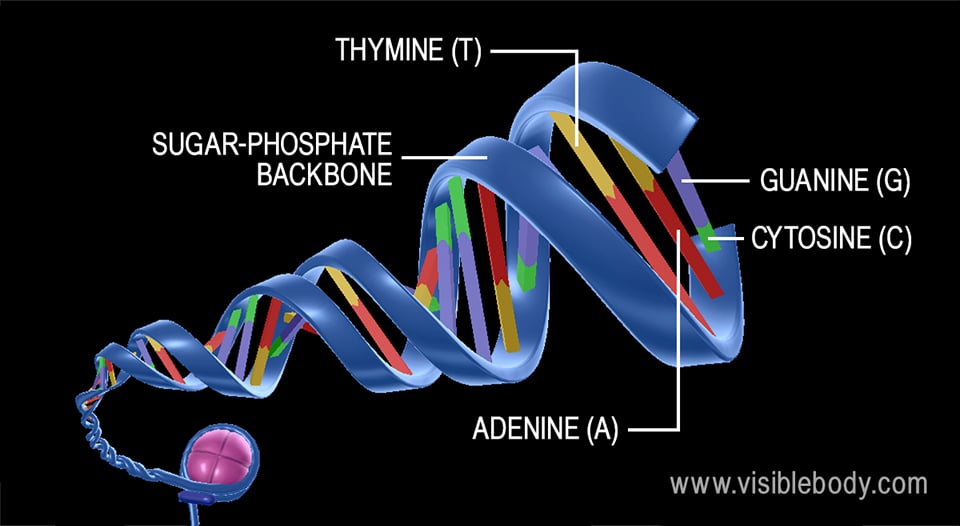 3. The sequences of nitrogenous bases on the two strands of a DNA molecule are complementary.

The sequence of nitrogenous bases on one strand of a DNA molecule’s double helix matches up in a particular way with the sequence on the other strand. Adenine pairs with thymine and cytosine pairs with guanine.

Why do the nitrogenous bases pair in this specific way? The bases on each strand are joined to the bases on the other strand with hydrogen bonds, but different bases have different chemical structures. Cytosine and thymine (and uracil in RNA) are pyrimidines, containing one ring. Adenine and guanine are purines, containing two rings. The pyrimidines pair with the purines: cytosine and guanine form three hydrogen bonds, and adenine and thymine form two.

Each strand of DNA is like a recipe book for synthesizing proteins. Certain sequences of nitrogenous bases along the strand encode particular RNA molecules. These sequences are called genes. mRNA molecules transcribed from genes are translated into proteins later.

Although genes get most of the credit for what DNA does, they make up only about 1% of DNA (in humans). Genes are separated from one another by sequences of nitrogenous bases that don’t provide instructions for RNA synthesis. These are called intergenic regions. Even within genes, there are regions of noncoding DNA called introns.

Noncoding regions of DNA are important because they provide binding sites for proteins that help activate or deactivate the process of transcription. They can also provide protection for the coding regions. For instance, telomeres consist of repetitive sequences that protect the genetic information on each DNA molecule from being damaged during cell division.

An article from Nature about the genome of Carsonella rudii.

Details on Chromosome 1 and Chromosome 21 from the US National Library of Medicine’s Genetics Home Reference.

An article on noncoding DNA from the US National Library of Medicine’s Genetics Home Reference.