How do new species arise?

In sexually reproducing organisms, a species is a group of organisms that can successfully interbreed and produce fertile offspring. New species develop all the time…but how? In evolutionary biology, speciation is defined as the formation of one or more new descendant species from one ancestor species.

1. Reproductive isolation is when gene flow between groups of organisms stops.

When populations can no longer reproduce with each other, gene flow between those populations stops. This makes it possible for two populations from one original species to evolve into two new species.

Natural selection, mutation, genetic drift, and gene flow (gene migration) all contribute to changes in allele frequencies. Collectively, these are referred to as the main mechanisms of evolution.

There are a few different ways organisms can be reproductively isolated from each other. These mechanisms generally fall into one of two categories: prezygotic and post-zygotic.

Members of different populations may be mechanically or genetically unable to reproduce with each other—even if mating does occur, it won’t lead to fertilization.

Postzygotic reproductive isolation means that hybrid offspring can occur between populations or species, but these hybrid offspring either don’t survive to reproductive age or aren’t fertile if they do. Mules—the offspring of a horse and a donkey—are a good example of a postzygotic barrier to reproduction. Though a horse and a donkey can mate and produce a mule, mules cannot successfully produce egg or sperm cells via meiosis because of their mismatched chromosomes. Therefore, they are sterile and can’t produce their own offspring.

2. Allopatric speciation is another name for geographic isolation.

When populations become separated from each other by a geographic barrier, this leads to reproductive isolation. Geographic isolation can result from natural processes that range from gradual changes, such as erosion, to disasters, such as landslides or floods. Geographic isolation can also result from migration to a new location, especially when returning to the original location is impossible. Given enough time, this combination of geographic and reproductive isolation leads to allopatric speciation (allopatric = “in other homelands”).

Adaptive radiation is a specific case of allopatric speciation in which a “founder species” disperses throughout an area and gives rise to several new species as populations from the original species adapt to different habitats and ecological niches. If this pattern sounds familiar to you, that’s because it’s what happened with the Galapagos finches Darwin studied! Over time, the original founder species adapted to different food sources on different islands, which led to multiple new species of birds with different beak sizes and shapes. 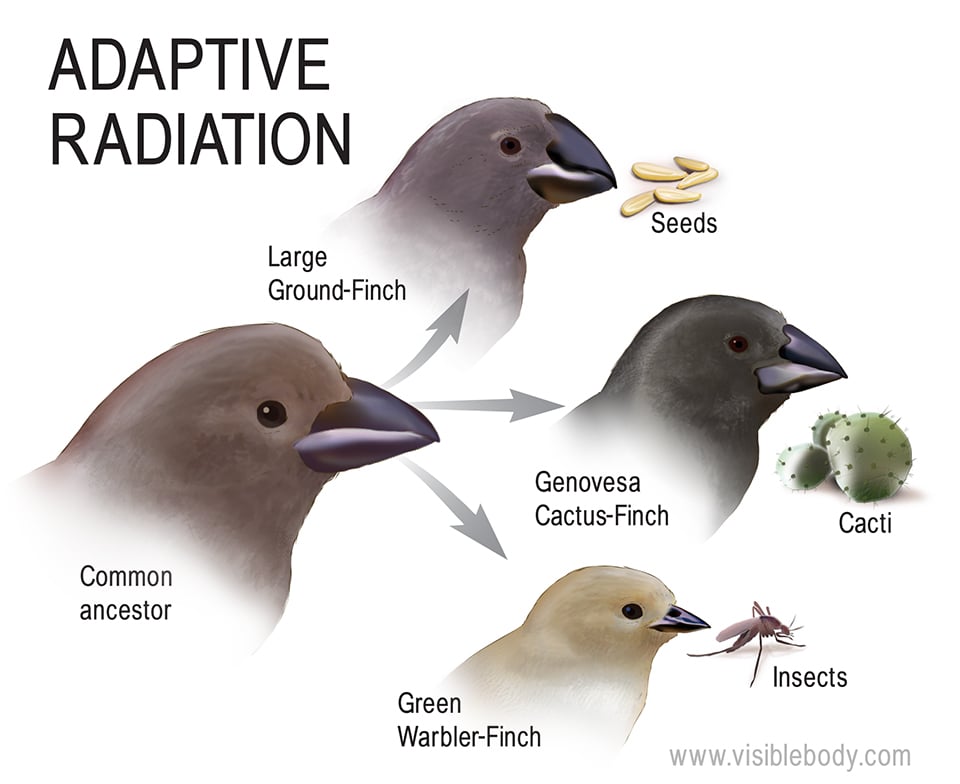 Polyploidy—having more than two full sets of chromosomes—is rare in animals. However, it is a fairly common source of sympatric speciation in plants.

Autopolyploidy can occur when chromosomes don’t separate properly during meiosis, producing gametes with an extra set (or sets) of chromosomes. A plant with these gametes couldn’t produce viable offspring with other, normal gamete producing plants of its species. However, it could self-pollinate or produce viable offspring with plants whose gametes had the same number of (extra) chromosomes. This example is particularly interesting because it illustrates a situation in which speciation can occur over only a single generation!

Allopolyploidy produces a hybrid organism with multiple sets of chromosomes by combining the gametes from two different species. If that hybrid organism produces a polyploid gamete that combines with a normal gamete from one of the parent species, viable fertile offspring may result if a full double set of chromosomes from each parent is formed. Wheat is an example of an allopolyploid organism humans have cultivated, crossing wheat (Triticum) with rye (Secale cereale).

Environmental factors can also lead to sympatric speciation. For example, differences in food sources can lead to morphological changes in individuals of the same original species that live in the same place. We might be seeing the beginning of sympatric speciation in the disruptive selection example from the Mechanisms of Evolution article. In this example, the scrub jays of Santa Cruz island have evolved two different beak shapes based on food sources found in pine vs. oak forest habitats. Similarly, over the last century or so, the cichlid fish in Lake Apoyeque, Nicaragua, have evolved into thick-lipped and thin-lipped species based on their different diets.

The apple maggot fly in North America is another example of sympatric speciation in progress. Apple maggot flies (Rhagoletis pomonella) evolved from a species of fly that lays eggs only in the fruit of Hawthorn trees. Around 200 years ago, after apple trees were introduced to North America, some flies from that original species began mating in apple trees and laying their eggs inside apples. The descendants of these flies maintained their preference for mating and laying eggs in apple trees, whereas members of the original species continued to mate and lay their eggs in Hawthorn trees. Occasionally, these two species do interbreed, but for the most part, gene flow has stopped between them, meaning that they are separating into distinct species.

As you can see from the previous examples, there are many situations in which speciation has occurred to give us the variety of species we see today, and there are multiple species undergoing the processes that lead to speciation right now! Evolution may operate on a long timescale, but we can definitely observe it and its effects all around us by studying the organisms we share the planet with.

Article from Wired: This Jay is Evolving in a Very, Very Weird Way