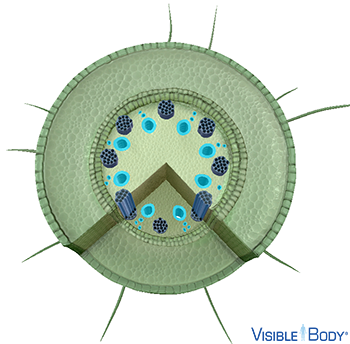 In vascular plants, the xylem and phloem form continuous tubes that carry water, nutrients, and other substances throughout the plant's roots, stem, and leaves. Negative pressure in the xylem moves water and dissolved minerals from the roots upward to the stem and leaves. The xylem contains several types of cells, including tracheids, vessel elements, parenchyma, and fibers. Tracheids and vessel elements are thick-walled cells that are dead at maturity, and they form side by side, connecting together to form tubes. 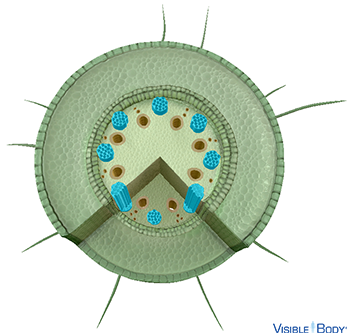 In vascular plants, the xylem and phloem form continuous tubes that carry water, nutrients, and other substances throughout the plant's roots, stem, and leaves. Positive hydrostatic pressure in the phloem moves dissolved sugars and organic compounds from the leaves downward to the stem and roots via a process called translocation. The phloem of monocots and dicots contains conducting cells (sieve elements) and companion cells. Conducting cells have thin walls, and they are alive in the mature plant, but they lack a nucleus and most other organelles. 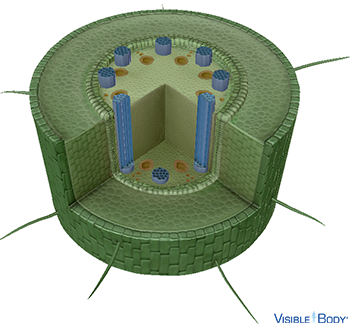 Monocot roots have a fibrous structure, meaning they form a wide network of thin roots that originate from the stem and stay close to the soil surface. The ground tissue of monocot roots, primarily composed of parenchyma cells, is divided by a ring of vascular tissue into the outer cortex and central pith. 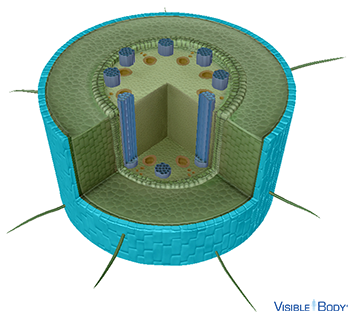 The root's outer dermal tissue layer is the epidermis, a single layer of cells that protects the root and controls water and mineral absorption. 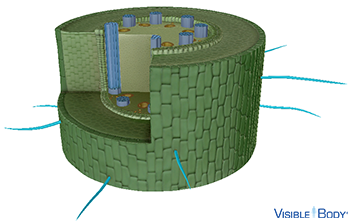 Root hairs extend from the epidermis of monocot and dicot roots. Each root hair grows laterally as an extension of a trichoblast, a type of epidermal cell located in the root's maturation zone. Root hairs enhance the root's total surface area to maximize water and mineral absorption from the surrounding soil.

Function: Their large surface area allows root hairs to efficiently absorb water via osmosis and minerals via diffusion. Their large central vacuoles allow them to collect water and minerals, which are passed into the root. 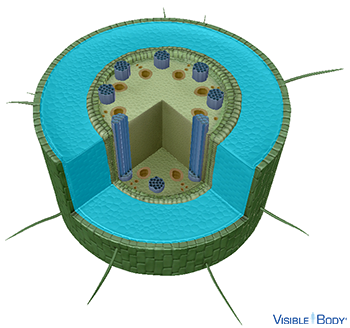 The cortex is a ground tissue region found in monocot and dicot roots, located between the outer epidermis and the inner vascular structures. It is primarily composed of parenchyma cells, but it may contain an outer layer of sclerenchyma cells in monocot roots.

Function: The primary functions of the cortex are diffusing water, nutrients, and other substances into the inner vascular structures and storing starch. 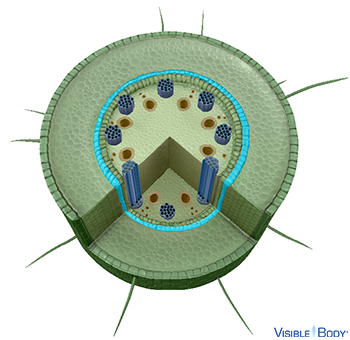 The endodermis is a single layer of cylindrical parenchyma cells that separates the root's cortex and stele. Endodermal cells have thick walls, and their radial and transverse walls contain Casparian strips, waxy bands that prevent water from passing between the cells.

Function: The endodermis regulates the flow of water, ions, and hormones into and out of the vascular structures within the stele. 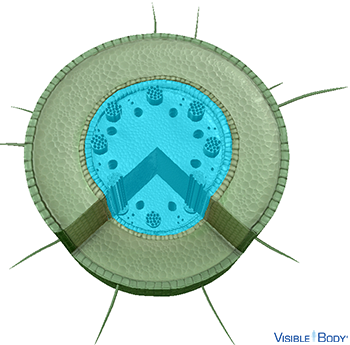 The stele (or vascular cylinder) is in the central region of the root, where the xylem and phloem develop. In monocot roots, the stele contains an exterior ring of phloem and an interior ring of xylem arranged around the central pith. 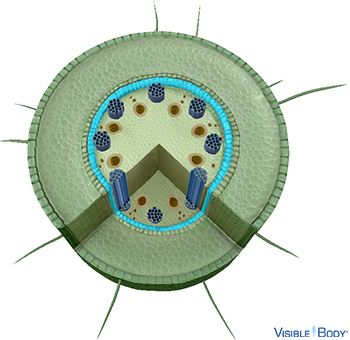 The pericycle is the outermost layer of the stele (or vascular cylinder). Although it is composed of nonvascular parenchyma or sclerenchyma cells, it is considered to be part of the vascular cylinder because it is produced by the procambium.

Function: The pericycle supports the root, protects its vascular structures, stores nutrients, and facilitates root growth. Pericycle cells can divide and give rise to lateral roots in both monocots and dicots. 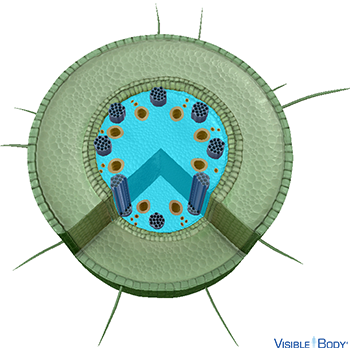 Located in the middle of monocot roots, the pith (or medulla) is composed of soft, spongy parenchyma cells with spaces between them. The pith is surrounded by a ring of vascular bundles, containing xylem and phloem.

Function: Its primary function is storing water and nutrients and transporting them throughout the plant.

In monocot roots, sclerenchyma cells can be found in tissues where growth has stopped. There are two types of sclerenchyma cells, fibers and sclereids, which are dead at maturity and have thick, lignified cell walls. 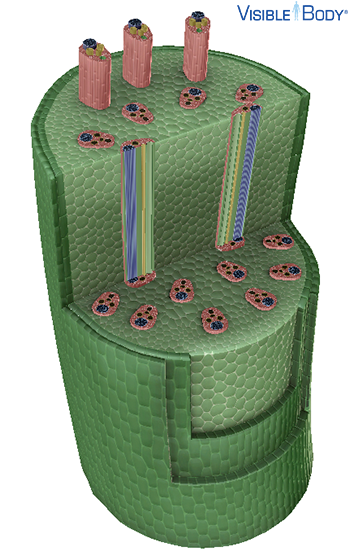 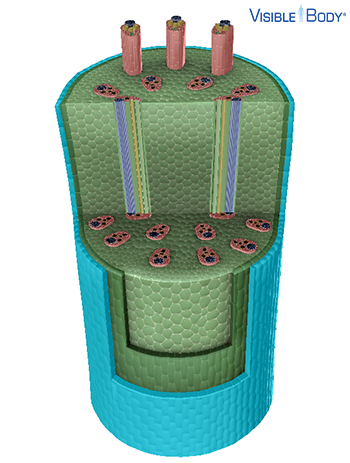 The stem's outer dermal tissue layer is the epidermis, a single layer of cells that prevents damage caused by sunlight, pathogens, and herbivores. In some stems, the dermal cells secrete a waxy substance that forms a cuticle, a protective covering that helps the stem retain water. In monocot stems, there are no trichomes (hairs) extending from the epidermis. 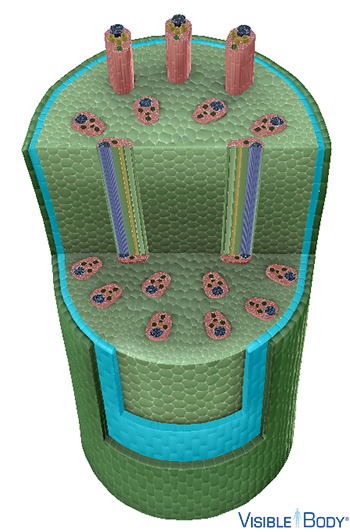 In monocot stems, the hypodermis is a tightly packed layer of sclerenchyma cells located interior to the epidermis.

Function: It provides structural support to the stem. 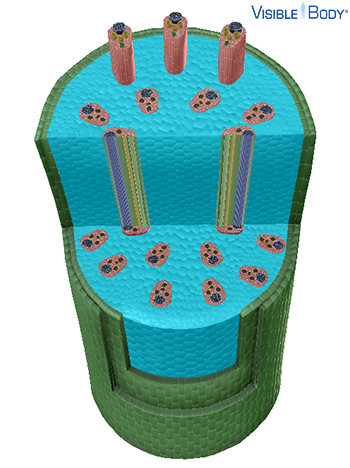 The majority of the monocot stem is composed of ground tissue, which primarily consists of parenchyma cells. Sclerenchyma cells are also found in regions that require extra strength.

Function: In the ground tissue, the cells are loosely arranged and there is space between them, which facilitates gas exchange between the stem and the surrounding air. 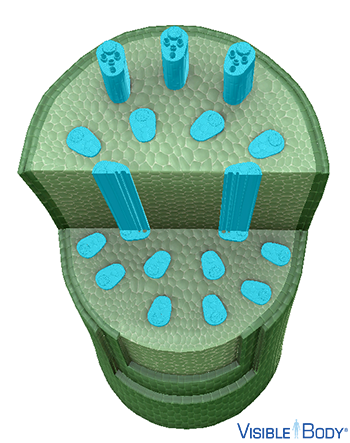 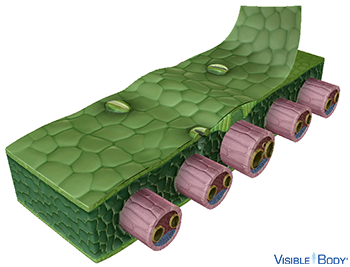 Monocot leaves have an upper and lower epidermis, which both contain several small pores, called stomata, which facilitate gas exchange and allow water vapor to exit the leaf. The upper and lower epidermis are separated by ground tissue, called mesophyll, which contains parenchyma cells that carry out photosynthesis and sclerenchyma cells that provide structural support. In monocot leaves, the vascular structures form parallel veins that are connected to the stem's vascular structures. 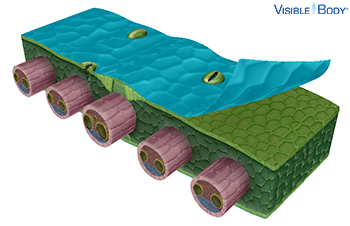 The leaf's dermal cells produce and secrete a waxy substance, composed of lipid polymers, that forms a protective covering called the cuticle.

Function: It acts as a barrier that prevents water loss via evaporation and protects the leaf from light damage and invading pathogens, such as viruses, bacteria, and fungi.

Leaves have two outer dermal tissue layers, the upper and lower epidermis, each composed of a single layer of cells that prevents damage caused by sunlight, pathogens, and herbivores. The monocot leaf epidermis contains silica, which provides a deterrent to herbivores.

Stomata (singular: stoma) are small epidermal pores that allow gases and water vapor to move between interior leaf structures and the surrounding air. In monocot leaves, the upper and lower epidermis both contain stomata. Note: Stomata are also present in photosynthetic stems. 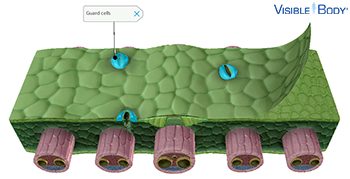 Each stoma is surrounded by two guard cells, specialized epidermal parenchyma cells that open and close the pore.

Most monocot leaves have bulliform cells, large, round cells grouped on the upper surface, usually near the midrib.

Function: These colorless cells absorb water when it's plentiful, which opens the leaf. In dry conditions, these cells become almost empty, causing the leaf to fold or curl in order to reduce the leaf's exposure to light and prevent water loss.

Collenchyma cells can be found in tissues where growth is occurring. Alive at maturity, these elongated cells have thick cellulose and pectin walls.

In monocot and dicot leaves, sclerenchyma cells can be found in tissues where growth has stopped. There are two types of sclerenchyma cells, fibers and sclereids, which are dead at maturity and have thick, lignified cell walls.

The leaf's ground tissue, called the mesophyll, separates the upper and lower epidermis.

Function: This ground tissue is mostly composed of parenchyma cells that carry out photosynthesis within the leaf and gas exchange between the leaf and the surrounding air.

Function: These cells protect the vascular structures and play a role in photosynthesis.