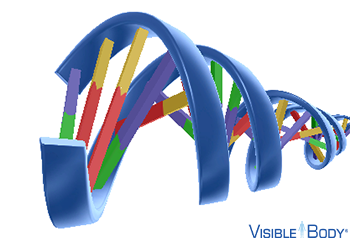 DNA is a macromolecule that consists of two polynucleotide strands—composed of units called nucleotides—twisted around a common axis in a double helix shape. The DNA double helix looks like a twisted ladder, due to the way the components of the nucleotides bind together. 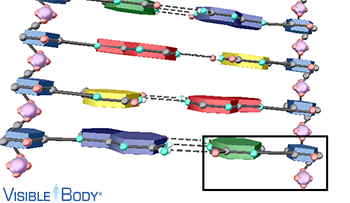 Each nucleotide consists of a sugar molecule (deoxyribose), a phosphate group, and a nitrogenous base, which can be adenine (A), thymine (T), cytosine (C), or guanine (G). 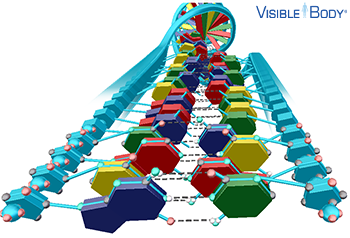 The DNA double helix looks like a twisted ladder, due to the way the components of the nucleotides bind together. Covalent bonds join the sugar of one nucleotide to the phosphate group of the next nucleotide along each DNA strand, forming the sugar-phosphate backbone that makes up the sides of the ladder. 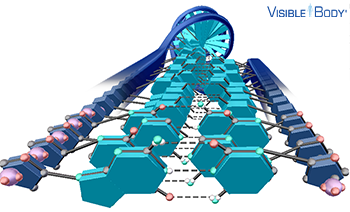 The DNA double helix looks like a twisted ladder, due to the way the components of the nucleotides bind together. Hydrogen bonds join the nitrogenous bases of the two DNA strands, binding adenine (A) with thymine (T) and cytosine (C) with guanine (G) to form the base pairs that make up the rungs of the ladder. These bases have different chemical structures that facilitate complementary base pairing. Cytosine and thymine are pyrimidines—containing one ring—whereas adenine and guanine are purines—containing two rings. Pyrimidines pair with purines; cytosine and guanine are joined by three hydrogen bonds, and adenine and thymine are joined by two hydrogen bonds.

In eukaryotic cells, chromatin consists of the DNA within the nucleus and its associated proteins, most of which are histones. Eukaryotic chromosomes are composed of chromatin, and each consists of two complementary strands of DNA coiled tightly around histone proteins. These histones compact long DNA molecules into a series of nucleosomes, the basic units of chromatin. Several nucleosomes are compacted and coiled to form 30-nm solenoid fibers, which in turn are supercoiled and folded into loops that are tightly packed together to produce thicker fiber, which can be 250-nm, 700-nm, or even thicker than that. During prophase of mitosis or meiosis I, chromatin is compacted even more, becoming visible under the microscope as individual chromosomes.

In eukaryotes, chromosomes are structures, located within the membrane-bound nucleus, that contain the cell's genetic information, or DNA. Most eukaryotic cells have multiple chromosomes composed of chromatin, two complementary strands of DNA coiled tightly around proteins called histones. 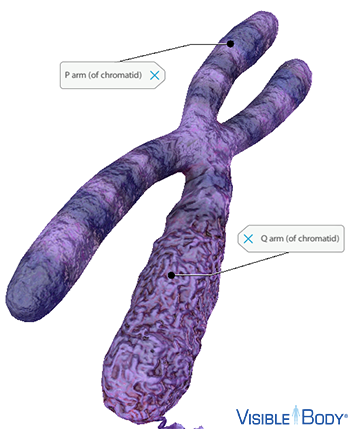 Each eukaryotic chromosome consists of a linear DNA molecule with two arms, the shorter p arm and the longer q arm, separated by the centromere. 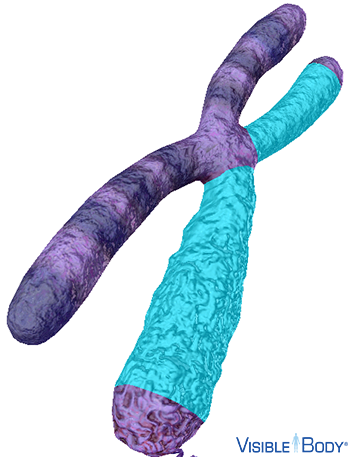 The centromere is the constricted region of the chromosome that separates the shorter p arm from the longer q arm. Prior to cell division, protein complexes called kinetochores form on the centromeres of the replicated chromosome's sister chromatids. During prophase of mitosis or prophase II of meiosis, spindles attach to the kinetochores on each chromatid's centromere. During metaphase, the spindles align the chromosomes on a single plane in the center of the cell, and during anaphase, they pull the sister chromatids apart to form two separate chromosomes. 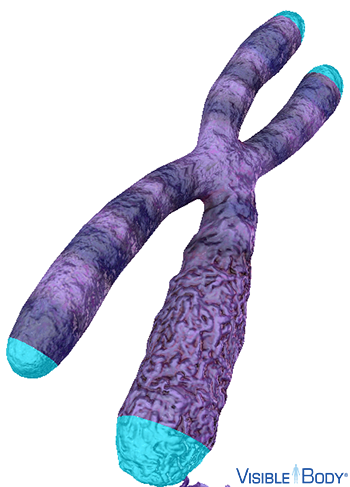 Telomeres are repetitive DNA sequences, consisting of TTAGGG (T: thymine, A: adenine, G: guanine), that cap the chromosome's ends, preventing the ends from deteriorating or fusing with other chromosomes. Each time a chromosome replicates, segments of its telomeres are cut off. Thus, telomeres serve as buffers that prevent the essential genes from being cut off during chromosome replication and cell division. An enzyme called telomerase generates new telomeres on the ends of replicated chromosomes. Most somatic cells have little or no telomerase, and the number of divisions they can undergo is limited. 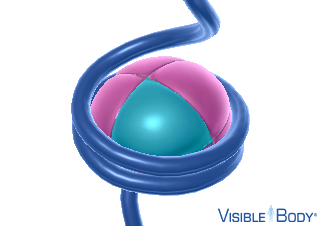 Each nucleosome is composed of a DNA segment wrapped around a cluster of eight histone proteins. These histones, the main type of protein in chromatin, help compact long DNA molecules into chromosomes. There are five major types of histones, including four core histones (H2A, H2B, H3, and H4) and one linker histone (H1). The nucleosome's eight core histones—two of each type—are joined together to form its core particle, and the linker histone holds the DNA in place on the nucleosome. Each core histone has a short tail that contains sites for methylation and acetylation, chemical processes that adjust how tightly the DNA winds around the histone core proteins. Thus, these histone tails play an important role in differential gene expression, because only loosely compacted genes are available for transcription. 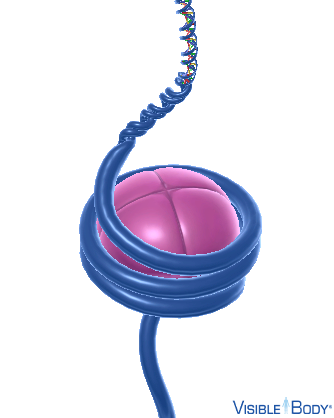 In eukaryotes, nucleosomes are the primary structural component that compacts chromatin, forming repeating chromatin segments on a DNA strand. Each nucleosome is composed of a DNA segment wrapped around a cluster of eight histone proteins.

Small stretches of DNA, called linker DNA, connect the core particles of consecutive nucleosomes, so they look like beads on a string. 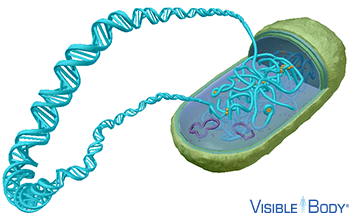 In prokaryotes, chromosomes are structures, located within the non-membrane-bound nucleoid, that contain most of the cell's genetic information, or DNA. Most prokaryotic cells have one circular chromosome, composed of a long DNA double helix that is compacted by various nucleoid-associated proteins (NAPs) and enzymes to fit within the nucleoid region of the cytoplasm. Since prokaryotic cells have only one chromosome, they are classified as haploid cells. 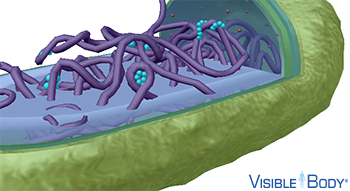 Nucleoid-associated proteins (NAPs) consist of various types of proteins found in the nucleoid region of prokaryotic cells. These proteins organize the structure of the chromosome and facilitate gene expression by binding chromosomal DNA. Some bind to nonspecific sequences, introducing bends and folds to help condense the DNA, so it fits within the nucleoid. Others bind to specific sequences that facilitate DNA replication and RNA transcription. 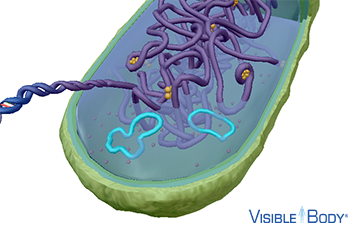 Prokaryotic cells often contain plasmids—small, circular, and often coiled DNA molecules that carry nonessential genes that help the cell survive in stressful conditions. Plasmids can replicate themselves, and they are not associated with the cell's chromosome, which contains the essential genes needed for survival.