Under Pressure: Mechanisms of Evolution

Evolution is the process by which populations change over time. When we talk about how populations change in an evolutionary sense, we’re generally talking about the frequency of different alleles within that population. Remember: an allele is one “version” of a particular gene. Different alleles are often associated with different phenotypes, or observable traits, such as seed color in pea plants or beak size in finches.

Natural selection, mutation, genetic drift, and gene flow (gene migration) all contribute to changes in allele frequencies. Collectively, these are referred to as the main mechanisms of evolution. 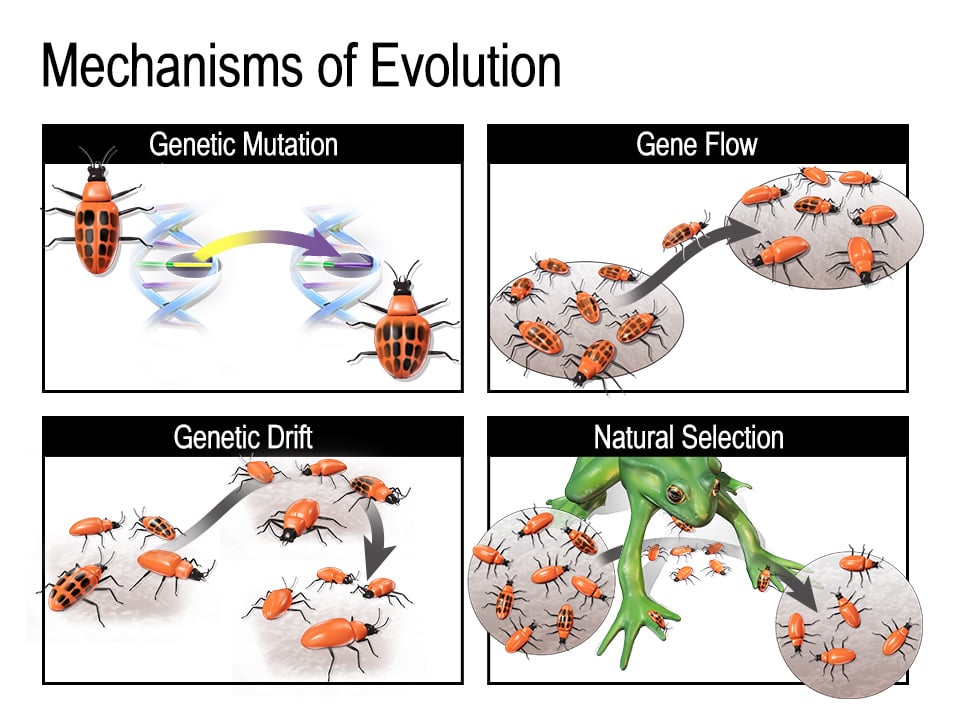 2. Natural selection occurs in different patterns and in response to different selection pressures.

Natural selection is the “prototypical” mechanism of evolution. At the most basic level, organisms have traits that they can pass on to their offspring. Populations often produce more offspring than the available resources will support. This means that individuals with traits that help them survive in their environment are more likely to reproduce and pass on those advantageous traits to their own offspring. Over time, an allele for a trait that gives this kind of advantage will become more common in the population as a whole. 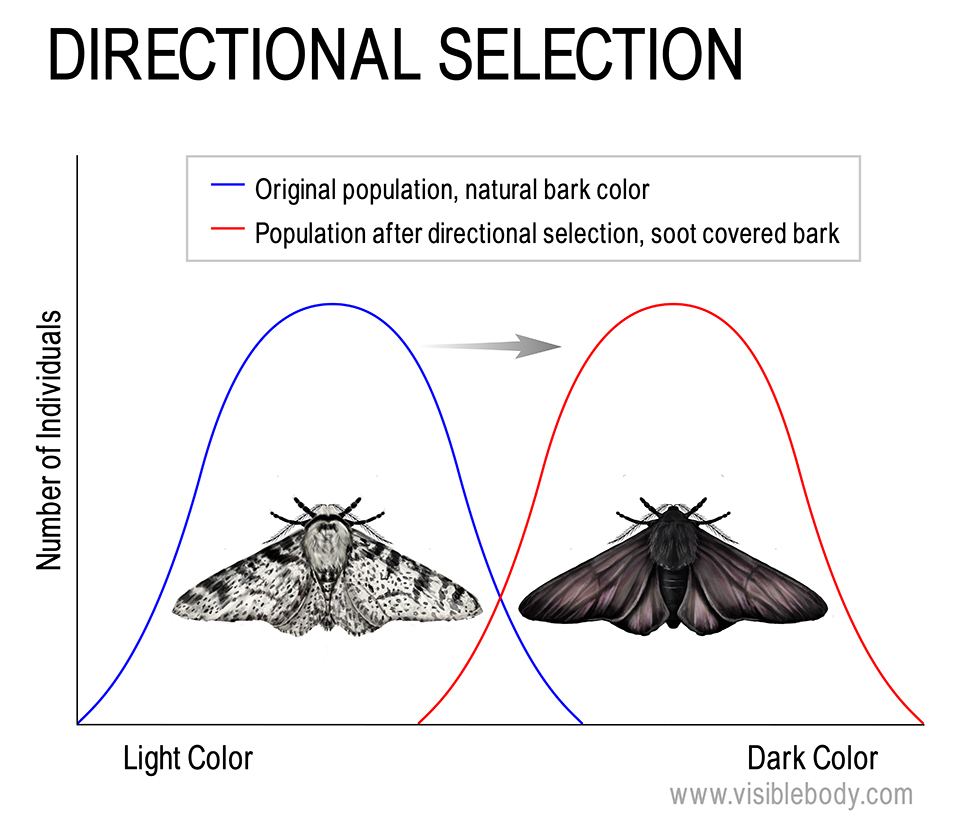 Conversely, stabilizing selection selects against these kinds of “extreme” phenotypes, leading to an increased frequency of traits in the middle of a range. This often occurs when “extreme” traits would put individuals at a disadvantage. For example, if plants that are too short don’t get enough sunlight and plants that are too tall are susceptible to damage from wind, plants of medium height would be more likely to survive and pass on their genetic information. Birth weight in human babies is a common example—babies with too low a birth weight are more susceptible to cold and disease, and larger babies are more difficult to deliver. This means that the distribution of birthweight in human babies looks like a normal distribution curve (aka. a bell curve), with most babies being born with weights that fall in the middle of the range. 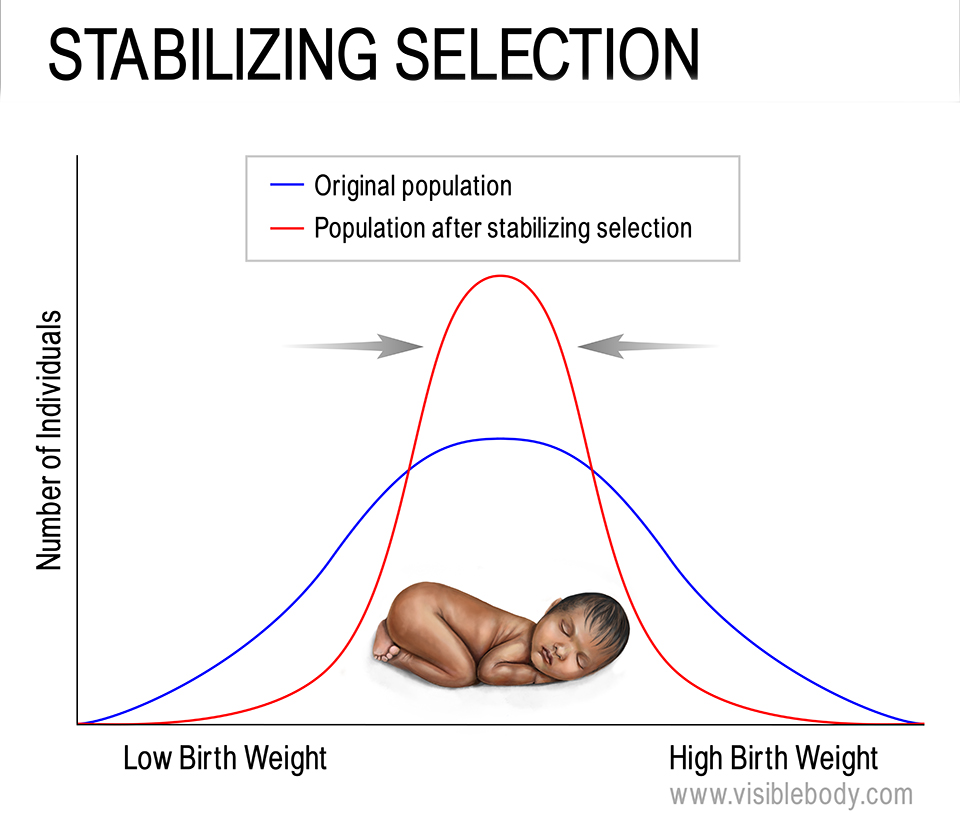 Disruptive selection, or diversifying selection, is similar to directional selection, except that diversifying selection leads to an increased frequency of alleles for traits at either end of a range (instead of just one extreme) and a decreased frequency of those traits that fall in the middle. A particularly interesting (and recently observed) example is the scrub jays on Santa Cruz Island. Though these birds are all part of the same species and all live on the same small island, two distinct populations have formed among them. One population lives in oak forests and eats acorns, so its members have shorter bills, and the other population lives in pine forests and opens up pine cones for food, so their longer bills give them an advantage there. Technically, these two populations could interbreed, but they tend not to. 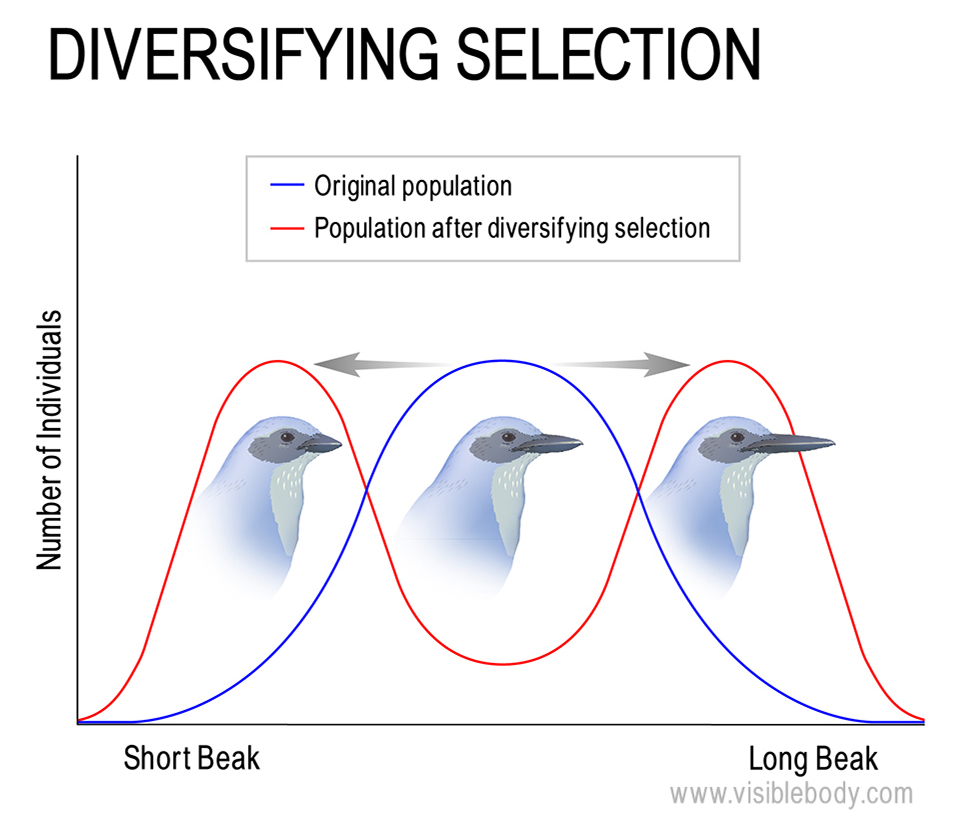 Artificial selection occurs when humans selectively breed plants and animals for particular traits. Dog breeds are an example of artificial selection that many of us encounter every day! Humans have selected for various traits in dogs for thousands of years, creating a huge amount of variation among breeds. Some people need their canine companions to help with a particular task, like hunting or herding livestock, and others choose breeds because they want dogs to have a particular appearance or temperament.

While natural selection is acts on an individual’s fitness for survival and reproduction in a particular environment, mutations introduce an element of randomness.

At the most basic level, a mutation is a change in an organism’s DNA sequence. These changes can occur during DNA replication before cell division, but they can also be caused by environmental factors such as exposure to radiation or certain chemicals. Mutations that occur in germ line cells can be passed on to offspring, and mutations that occur only in an organism’s somatic cells aren’t passed on.

The word “mutation” often has a negative connotation in popular culture, because mutations can have harmful and even deadly results such as cancer or genetic diseases like cystic fibrosis.

However, mutations happen in the DNA of living things all the time, and not all of them are bad. In fact, mutations can even help organisms survive. Many antibiotic-resistant strains of bacteria owe their resistance to mutations that allowed certain bacteria to survive treatment with antibiotics and pass on their genes to their offspring. Ultimately, mutations are an important source of genetic diversity in populations.

Genetic drift occurs when the frequency of a particular allele changes randomly. It has a greater effect on smaller populations, and, in response to a population bottleneck—an event that drastically decreases a population’s size—some alleles can be lost entirely. Bottlenecks could be caused by anything from a natural disaster to disease to geographic isolation. In very small populations, genetic drift can lead to an allele being completely lost just by chance. In extreme situations, one allele could become the only one left in a population for a particular gene. This is called becoming “fixed.”

In some cases, the changes in allele frequency brought on by genetic drift help new populations to become new species.

5. Gene flow is the result of the movement of individuals into or out of populations.

Gene flow—the movement of alleles into or out of populations—also influences allele frequency. If individuals in a large population interbreed with one another, members of that population will be fairly similar to one another in form, physiology, and behavior. Individuals might also migrate from one population to another within their species, introducing different alleles to their new population or decreasing the frequency of certain alleles in the population they migrated from.

Article from WIRED on the scrub jays of Santa Cruz island

YourGenome.org: What is a mutation?