I Want to Know What Blood Is: A 3D Visual Field Guide to Blood Cells

It’s February, and you know what that means here at VB...it’s time for a blog post about the circulatory system! Instead of focusing on the heart, though, today’s post will zoom in on the different kinds of cells found in blood.

In this visual guide, we’ll use the 3D blood cell models from Visible Biology to show you the identifying features and primary functions of red blood cells, platelets, and the different types of myeloid and lymphoid white blood cells.

(To learn more about how our content team worked with instructors to build these models, check out this blog post from a few months ago!)

From carrying oxygen throughout the body to responding to injuries and protecting the body from pathogens, blood cells have a wide range of functions that make them essential to our survival.

However, it might surprise you to learn that formed elements (red blood cells, white blood cells, and platelets) make up only 45% of the blood.

The composition of blood. Illustration from A&P.

The other 55% is plasma, a fluid that is responsible for blood’s ability to carry blood cells, proteins, electrolytes, hormones, and nutrients throughout the body. It also carries waste products to the kidneys so they can be excreted by the urinary system. 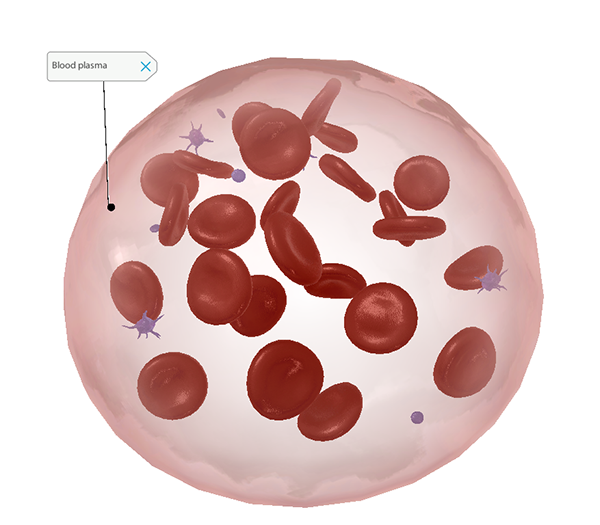 Red blood cells, also called erythrocytes, are probably what you think of when someone says “blood cell.” They’re flexible oval or round discs that move through the blood vessels, carrying oxygen to the body’s tissues. They produce a protein called hemoglobin, which is what ultimately allows them to perform this function.

Individual red blood cells live for around 100-120 days. Phagocytic cells in the liver, spleen, and lymph nodes engulf old, dead, and damaged red blood cells, and the iron they contained is recycled to make new hemoglobin. The production of new red blood cells by hematopoietic stem cells in red bone marrow is regulated by a hormone called erythropoietin, which is produced in the kidneys and liver.

Now, prepare to have your mind blown. Mature red blood cells are some of the few eukaryotic cells that don’t have nuclei. Once an erythrocyte enters the bloodstream for the first time, it ejects its nucleus and organelles so it can carry more hemoglobin (and, in turn, more of that sweet, sweet oxygen). 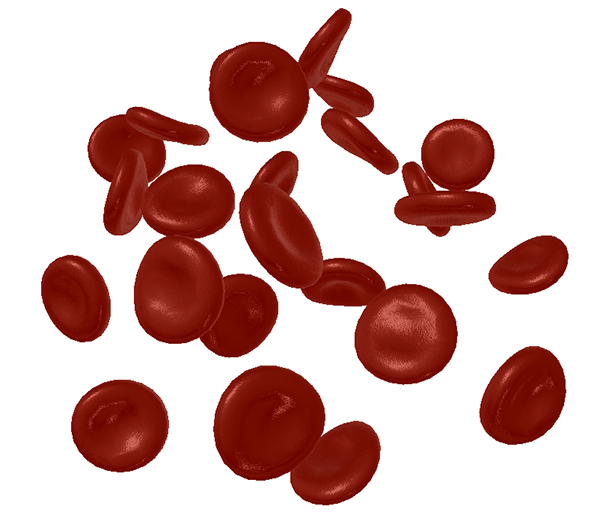 Platelets, another important formed element in the blood, aren’t cells at all. They’re actually cell fragments, formed when pieces of the cytoplasm of mature megakaryocytes in the bone marrow break away. Fun fact: one megakaryocyte can produce 1000–3000 platelets! The production of megakaryocytes (and therefore platelets) is regulated by the hormone thrombopoietin, which is also produced by the liver and kidneys. Platelets themselves are short lived, circulating for only about 10 days before being phagocytized.

The principal function of platelets is to prevent blood loss by clumping to form plugs at sites of injury to blood vessels. Inactivated platelets are spherical, but when a blood vessel tears, they spring into action, changing from their inactivated to their activated state and releasing chemicals that help stimulate blood clotting. Activated platelets are irregularly shaped, with protrusions that allow them to adhere to blood vessel walls and each other at the site of a tear. 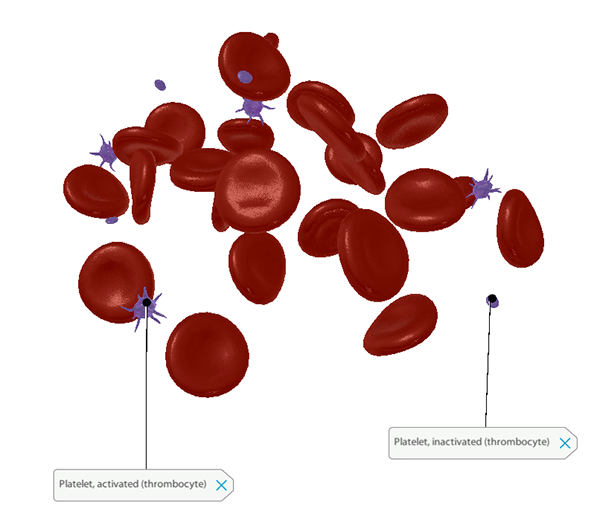 White blood cells, also called leukocytes, are typically larger than red blood cells, but they make up a smaller percentage of circulating blood. They also don’t spend all their time circulating through the bloodstream like erythrocytes do—they tend to hang out in lymphatic tissues or organs (like the thymus and spleen) and move where they’re needed in response to infection or inflammation.

The different types of white blood cells. Illustration from A&P.

Neutrophils, basophils, and eosinophils share a few key characteristics. Firstly, they’re granular, which means that they have particles called granules floating around in their cytoplasm. Usually, these granules are secretory vessels, containing chemicals that help neutrophils, basophils, and eosinophils respond to pathogens. Granular myeloid white blood cells also have nuclei with multiple lobes. For this reason, they’re sometimes referred to as polymorphonuclear leukocytes, or PMNs.

Despite these similarities, the three types of granular myeloid white blood cells serve different immune functions. Neutrophils are phagocytes—they engulf pathogens, such as bacteria, and use enzymes to dissolve them. Check out the neutrophil’s multilobed nucleus and granules in the image below! 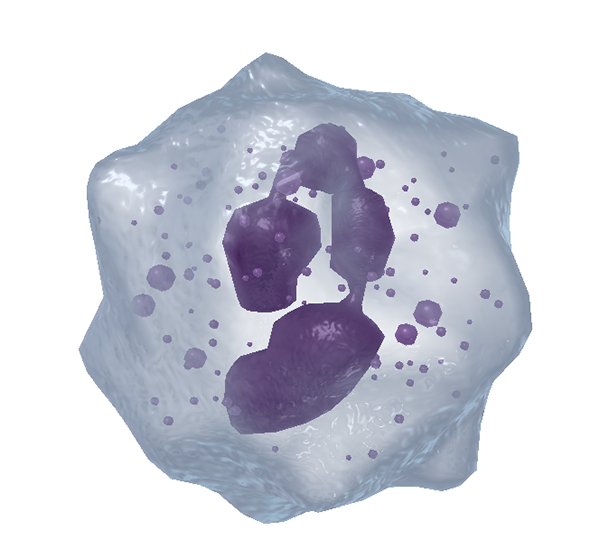 A zoomed-in view of a neutrophil from Visible Biology (beta). Check out Visible Body's Biology Learn Site to learn more about blood composition and blood cells.

Basophils release histamine and heparin during inflammatory or allergic reactions, promoting blood flow by dilating blood vessels and preventing blood clotting (respectively). They also release chemicals that attract more white blood cells to the area. In the image below, note how the basophil’s many large granules partially obscure its nucleus.

A zoomed-in view of a basophil from Visible Biology (beta). Check out Visible Body's Biology Learn Site to learn more about blood composition and blood cells.

Eosinophils are typically found in the loose connective tissue of the skin, as well as the respiratory and intestinal mucosae. They release digestive enzymes to combat parasites but can also be responsible for tissue damage during allergic reactions. In the image below, you can see how the lobes of the eosinophil’s nucleus form a horseshoe shape. 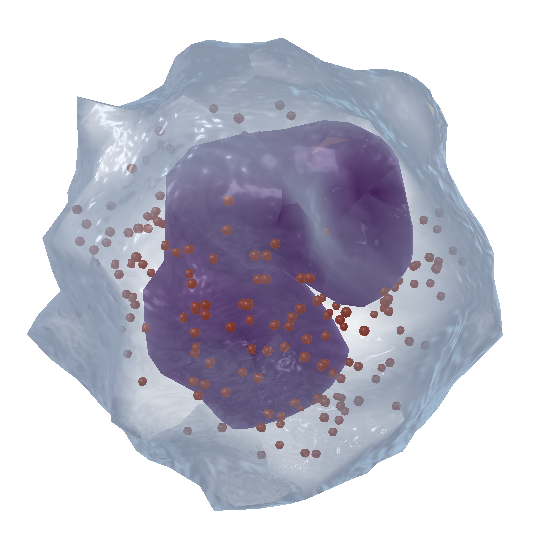 A zoomed-in view of an eosinophil from Visible Biology (beta). Check out Visible Body's Biology Learn Site to learn more about blood composition and blood cells.

Now let’s take a look at monocytes. Monocytes are agranular, and their nuclei don’t have lobes. They may descend from the same type of cells as their granular counterparts, but they do their own thing. When the body isn’t responding to infection or inflammation, most monocytes are inactivated. A large number of them are stored in the spleen. 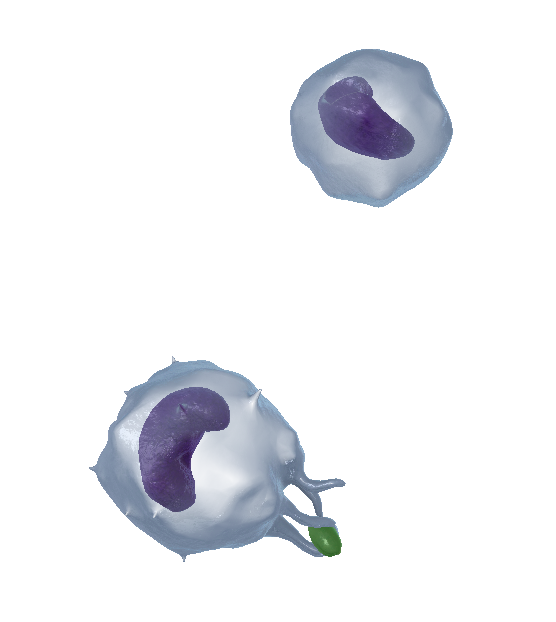 Monocytes are released into the bloodstream when other immune cells need backup. In their activated state, monocytes have protrusions called pseudopodia that engulf bacteria and other foreign substances.

Monocytes have one more pathogen-fighting trick up their sleeve, too. When they leave the bloodstream and enter the body’s tissues, monocytes can differentiate into macrophages, which engulf pathogens and display special protein markers for other cells of the immune system to recognize later.

Lymphoid white blood cells, also called lymphocytes, are the mature and differentiated forms of lymphoblasts, another type of cell in the red bone marrow. They include B cells, T cells, and natural killer (NK) cells. When observed under a microscope, lymphocytes have a large, spherical (non-lobed) nucleus. As you can see in the image below, NK cells have visible granules. On a microscope slide, B and T cells look fairly similar to one another. 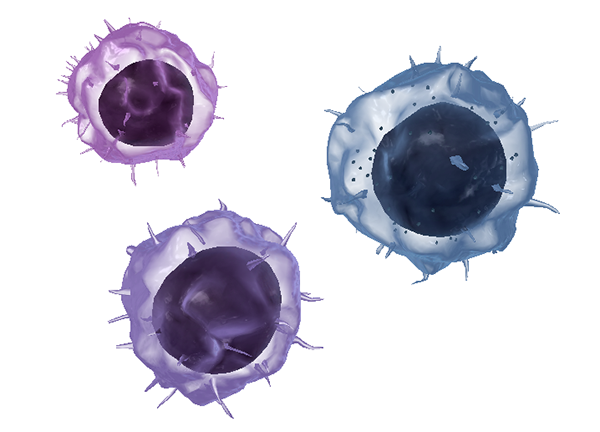 Zoomed in view of an NK cell (right), a B cell (top), and a T cell (bottom) from Visible Biology (beta). Check out Visible Body's Biology Learn Site to learn more about blood composition and blood cells.

Lymphocytes are the key players in adaptive immunity, the body’s set of targeted strategies for fighting pathogens. To learn more about how adaptive immunity is different from innate immunity, which is the body’s general response to injury or infection, see this blog post written by Prof. Blythe Nilson!

B cells are responsible for antibody-mediated immunity. They produce proteins called antibodies, which flag antigens (foreign substances that the body doesn’t recognize as its own) for neutralization or destruction. Special B cells called memory B cells stick around after an infection. They carry antibodies corresponding to a previously-encountered antigen on their cell membrane so that they can alert the immune system quickly and efficiently if that antigen invades the body again.

T cells are responsible for cell-mediated immunity. There are a few different subtypes of T cells involved. Helper T cells are the coordinators: they control B cells, promote the activity of phagocytes (cells that engulf and destroy pathogens), and call in cytotoxic T cells. Cytotoxic T cells kill body cells that have been infected by viruses or cancer. Regulatory T cells release proteins to regulate how intense the immune response from other cells is. Memory T cells, like memory B cells, remain after an infection to help quickly identify specific pathogens.

Check out Visible Body’s Biology Learn Site for a more in-depth look at the various specialized B cells and T cells.

Natural killer (NK) cells participate in both antibody-mediated and cell-mediated immune responses. Similar to cytotoxic T cells, NK cells destroy tumor cells or cells that have been infected by viruses. They can also “remember” pathogens they’ve encountered before.

We hope this guide to the body’s various blood cells has been helpful! If you want to learn more about blood and the circulatory system, here are some related blog posts and Learn Site articles: