Decoding the Heart: What Is an ECG?

If you’ve explored our newest app, Physiology & Pathology, you might have noticed that one of the tools you can use alongside the beating heart is a follow-along ECG. It looks a little something like this:

So, what can a bunch of squiggles tell doctors about the way someone’s heart is functioning? Quite a lot, actually. Today we’re going to talk about what an ECG is, the basics of how it works, and what exactly it shows clinicians about a person’s heart.

What is an ECG?

Let’s start off with the most basic question: what is an ECG? The simplest answer is that it’s a noninvasive method of measuring the heart’s electrical activity during the cardiac cycle. Doctors can see how long an electrical signal takes to pass through the heart, and how big the changes in voltage are as it does so. This can help them figure out whether a patient’s heart rate is normal or abnormal, and whether certain parts of the heart are getting overworked.

Best of all, the ECG doesn’t cause the patient any pain (although removing the electrodes after the procedure feels like removing a bandaid).

Fun fact: You might have heard an ECG referred to as an EKG. This is because Wilhelm Einthoven, the person who pioneered the name for the method and received the Nobel Prize for its discovery in 1924, did his work in the Netherlands, so he used the Dutch term “elektrokardiogram”—thus the EKG abbreviation.

How is an ECG administered?

How do you measure what’s going on in the heart without poking around inside a person’s body? You use electrodes that can pick up internal electrical activity from the surface of the skin. These electrodes are connected via wires to a machine that plots the recorded voltage over time. 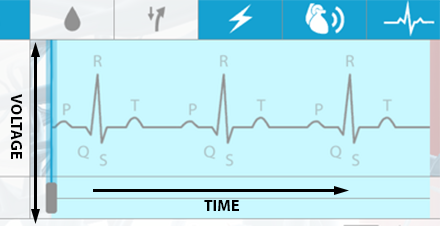 The ECGs given today are referred to as “12-lead” ECGs, because they use 10 electrodes to show 12 different electrical “views” of the heart. (Note: A “lead” can either refer to an electrode/wire itself or a view of the heart obtained using a combination of electrodes.) Six electrodes are placed on the patient’s chest, and one electrode is placed on each of their limbs.

What does an ECG measure?

A single round of the cardiac cycle shows up in 3 main “waves” on an ECG—the P wave, the QRS complex, and the T wave. These waves reflect the activities of the heart’s electrical conduction system, which is composed of specialized muscle fibers.

P wave
A heartbeat starts with the generation of an electrical signal at the sinoatrial node (SA node)—the heart’s natural pacemaker—and that signal subsequently passes to the atrioventricular node (AV node). On an ECG, this is what the P wave, that first little blip, represents.

PR Interval
The PR interval is the time between the start of the P wave and the start (the first deflection) of the QRS complex.

QRS wave complex
The big spike in the middle of the ECG is the QRS complex, which reflects the electrical signals leading to ventricular contraction. It’s made up of multiple waves, but they’re usually grouped together for analysis.

Once the electrical signal reaches the AV node, it passes on to the atrioventricular bundle (bundle of His), and then it travels down the bundle fibers to the Purkinje fibers. This stimulates the contraction of the ventricles, pushing blood out of the heart through the pulmonary artery and aorta.

ST Interval
The ST interval, or ST segment, is the time between the end of the QRS complex and the start of the T wave. This means it represents “the period of zero potential between ventricular depolarization and repolarization”—in other words, the pause between contraction and recovery.

ECGs can help medical professionals identify and/or monitor multiple types of heart conditions, including arrhythmias, blocked arteries, heart failure, heart attacks, and damage to the heart. Usually, an ECG is used when someone shows symptoms of a heart problem, such as chest pain, dizziness, fatigue, or shortness of breath.

ECGs also help doctors to measure the effectiveness of treatments like pacemakers and medications. Recent technology could soon allow for ECG to detect episodes of hypoglycemia (low blood sugar) in a noninvasive way, which would be great news for people with diabetes.

ECG readouts for particular heart conditions often have specific identifiable characteristics with respect to the different waves and intervals. Here are a few examples.

Atrial fibrillation is an arrhythmia in which the atria of the heart are not pumping normally—chaotic electrical signals cause them to quiver instead of contracting in a regular rhythm. Untreated AFib can result in a person being twice as likely to die of a heart-related cause and five times as likely to suffer from a stroke.

On an ECG, AFib can be identified by the absence of a normal P wave. The QRS wave is still there but occurs at irregular intervals.

A “sawtooth” P wave is characteristic of atrial flutter, which is not the same as atrial fibrillation but is closely related.

Abnormalities of the ST segment can mean several things, depending on their nature and what leads/electrodes they’re visible on. Depression of the ST segment on certain leads can indicate ischemia, which means that impaired blood flow to the heart tissue is depriving that tissue of oxygen. Elevation of the ST on certain leads can be a sign of myocardial infarction (MI), aka a heart attack. MI happens when tissue death occurs as the result a blockage in the coronary arteries preventing adequate blood from reaching the heart muscles.

Essentially, ECG is an important tool in cardiology because medical professionals must be able to assess the performance of the heart’s conduction system in order to diagnose and keep track of heart conditions such as arrhythmias and myocardial injury.

If you want to learn more about the cardiac cycle and cardiovascular pathologies, open up Physiology & Pathology and watch the beating heart in action!

For an in-depth look at the structures that make up the heart, check out our Build a Heart eBook!