What's Blood Got To Do With It? Blood Vessel Basics

We all know that blood is important. It’s not just the favorite food of vampires and mosquitoes—it’s a core element of keeping human bodies alive and functioning. In fact, 7–8% of your body weight comes from blood, because you’ve got between 4.5–5.5 liters of the stuff zooming around your circulatory system.

Just as important as blood itself are the vessels that transport it throughout the body. Our blood would be pretty useless to us if it couldn’t reach our body’s tissues to supply them with the oxygen they need to generate energy. That’s why we’re going to talk about what the blood vessels do and how they do it.

First, though, let’s talk about the components of blood itself.

You might think you’re fueled by caffeine—we all have those times—but blood is what really keeps you going. Whole blood is approximately 55% plasma and 45% blood cells (red blood cells, white blood cells, and platelets).

Plasma is the liquid that moves the blood cells around and carries nutrients, hormones, and proteins along with them. Red blood cells (erythrocytes) contain hemoglobin, which allows for the transportation of oxygen and carbon dioxide to and from the lungs. White blood cells, being part of the immune system, help deal with infections. Platelets are critical to blood clotting, which is key to you not dying of blood loss when you get a cut.

You're So Vein: Blood Vessel Structure and Function 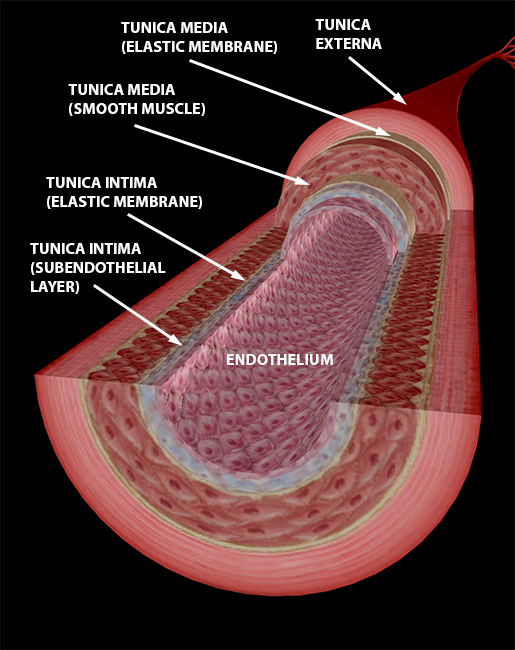 The image above shows the basic structure of an artery. Arteries are the blood vessels that carry blood away from the heart. They tend to have thick walls that contain lots of muscle because they need to alter their diameter in response to changes in pressure as the heart pumps.

The aorta is the largest artery in the body. It receives blood from the left ventricle and sends it either down through the aortic arch (and into the thorax, abdomen, and lower limbs) or up through the brachiocephalic trunk, common carotid arteries, and subclavian arteries (supplying the head, neck, and upper limbs).

Once blood leaves the main arteries, it passes through smaller and smaller ones until it reaches arterioles and capillaries, where it can give body tissues some of that sweet, sweet oxygen.

In contrast, veins carry blood from the body back to the heart once it is depleted of oxygen. Veins tend to have thinner walls than arteries do—note how much thinner the smooth muscle layer of the tunica media is in the vein in the image below—and they contain valves to prevent backflow.

Venules are the arteriole equivalent in the venous portion of the circulatory system: they feed into larger and larger veins. 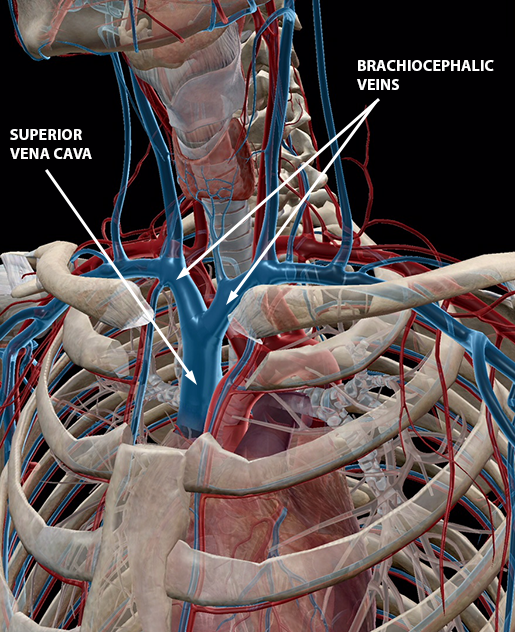 There’s nothing inferior about the IVC except the fact that it’s located under the SVC. Originating at the junction of the common iliac veins, it fights gravity as it brings blood from the trunk, abdomen, and lower limbs back to the heart.

Capillaries are the point of contact between the body's tissues and the blood vessel networks of arterial supply and venous return. Capillaries' thin walls, which consist of only a single layer of cells, allow for oxygen and nutrients to get where they need to go and for waste (such as carbon dioxide) to be collected and carried away.

Check out the web-like structure of the capillary beds that wrap around the alveoli in the lungs. 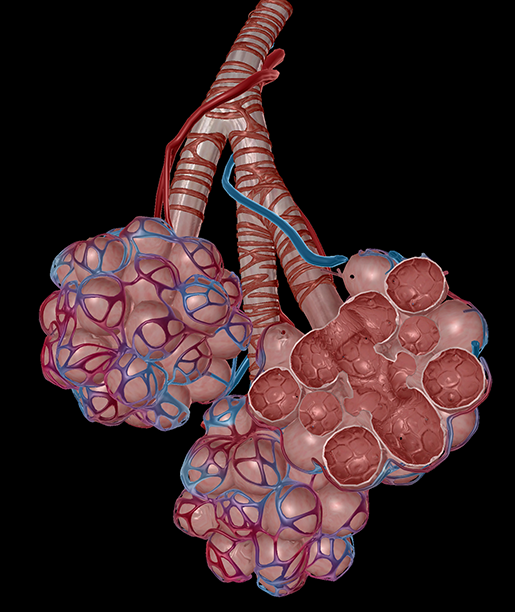 Speaking of lungs, I mentioned earlier that one of the blood’s principal functions is to carry oxygen throughout the body. The lungs are where the blood gets that oxygen.

The special circuit of blood vessels that directly connects the heart and lungs is kind of like a Bizarro World circulatory system where the arteries carry deoxygenated blood and the veins carry oxygenated blood.

In order to get the full picture of the pulmonary blood vessels, let’s look at the path blood takes from the time it enters the heart through the SVC or IVC and leaves through the aorta. First, the SVC and IVC empty deoxygenated blood into the right atrium. This blood is pumped into the right ventricle. From there, the blood passes into the pulmonary trunk, which is the first in the network of pulmonary arteries.

Once gas exchange has taken place in the capillary beds surrounding the alveoli in the lungs, oxygen-rich blood travels through the system of pulmonary veins back to the heart, entering through the left atrium. This blood gets pumped into the left ventricle and sent out of the heart through the aorta. 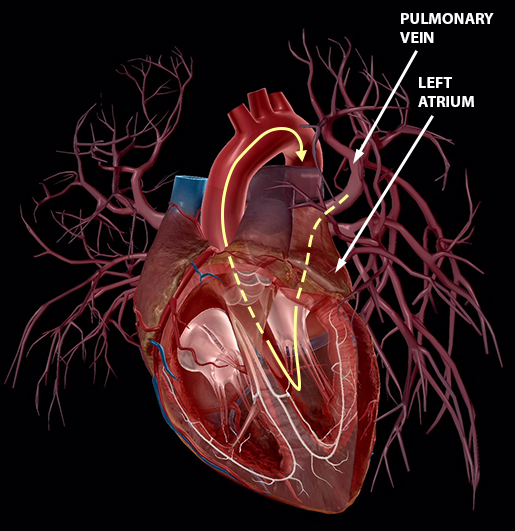 You'll Be In My Heart: Cardiac Blood Vessels

You might be wondering how the muscle tissues that keep the heart pumping get the blood and oxygen they need. Well, it turns out there are blood vessels in the heart, too!

The right and left coronary arteries, which originate at the base of the aorta, feed into a network of other arteries that keep the chambers of the heart well-supplied with oxygenated blood. 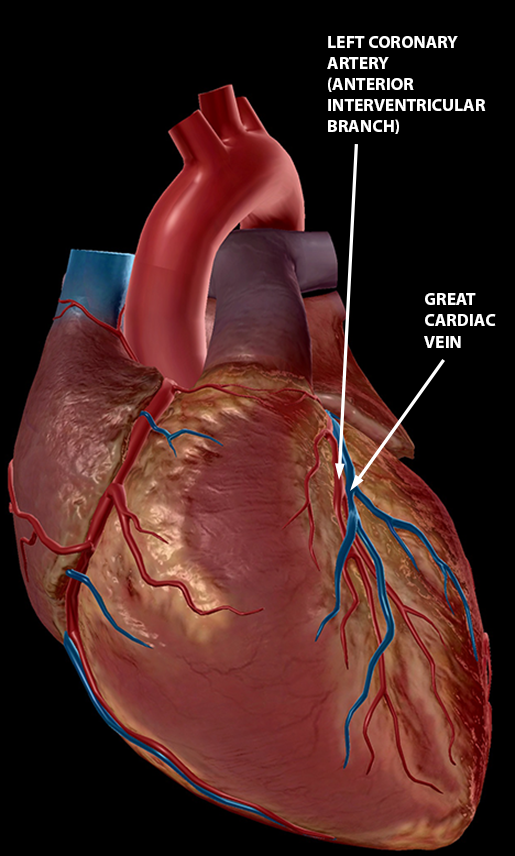 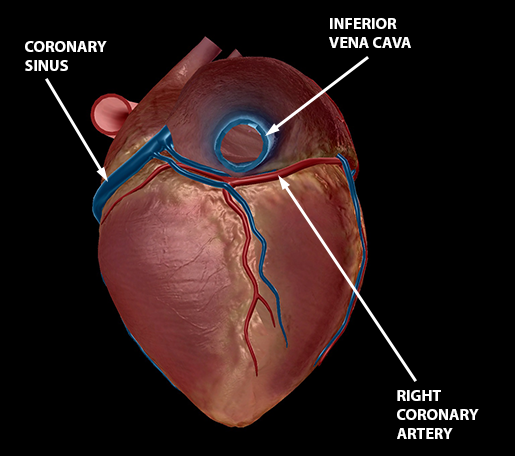 I'll Tell You What It Means: (Blood) Pressure!

No discussion of blood vessels would be complete without mentioning blood pressure.

The most basic (and literal) definition of blood pressure is the force blood exerts on the walls of blood vessels and the chambers of the heart. Basically, it’s a form of hydrostatic pressure exerted by blood on whatever is containing it.

Of course, when someone says “blood pressure” what we usually think of is arterial pressure—you know, the kind that’s measured with the cuff on your arm. You may have seen blood pressure measurements that look like this: 120/80 mm Hg. Let’s break that measurement down and talk about what it means.

Millimeters of mercury (mm Hg) is the unit of measurement for all types of blood pressure.

Certain conditions, such as arteriosclerosis, can result in consistently high pulse pressure. Arteriosclerosis is a “hardening of the arteries”—that is, it occurs when the arteries become more resistant (less elastic) due to irritation from a number of potential sources (infection, tobacco use, elevated levels of lipids and/or glucose in the blood, high blood pressure). The decrease in elasticity means that arteries can’t expand and contract easily when blood is pumped from the heart, so hypertension can be both a result and a cause of arteriosclerosis.

Damage to the internal organs is another potential consequence of long-term high pulse pressure and more rigid arteries.

Plaque can also accumulate in the blood vessels, causing a condition known as atherosclerosis. Atherosclerosis can cause ischemia (reduced blood flow) and, consequently, hypoxia (body tissues can’t get enough oxygen). In addition, plaque can cause blockages which can lead to a heart attack or stroke.

So what’s the moral of the story? Your blood vessels are an extensive network that helps your blood get where it needs to go, cycling fresh oxygen throughout your body and carrying away the waste products of cellular respiration (namely carbon dioxide). Disruptions to the circulation of blood can have severe consequences, so work with your healthcare provider to keep your circulatory system healthy—your heart will love you for it!