Newton, Massachusetts — May 07, 2019 — Visible Body announced today the release of more than one hundred 3D human anatomy models that can be viewed in augmented reality (AR) using the most popular mobile web browsers and AR-compatible phones and tablets. When visiting Visible Body's Learn Site or the Visible Body Blog, anyone using Android’s Chrome or iOS’s Safari browser can visualize structures of the human body in real space. After tapping to launch a 3D anatomy model, such as the human brain, a user can rotate it to visualize it from all sides and zoom into it to see detail — all in augmented reality. Visible Body used Google software to extend the availability of augmented reality beyond apps and into mobile search on the web. The results were part of today's Google I/O 2019 keynote.

"The release of Visible Body 3D anatomy models on the web is another leap forward in allowing people to interactively visualize the inside of the human body to understand how it works," said CEO Andrew Bowditch. "We’ve worked with Google on projects to include augmented reality capabilities in our Android apps, and those were hugely successful. This project makes popular anatomy models available for free to our web site visitors." 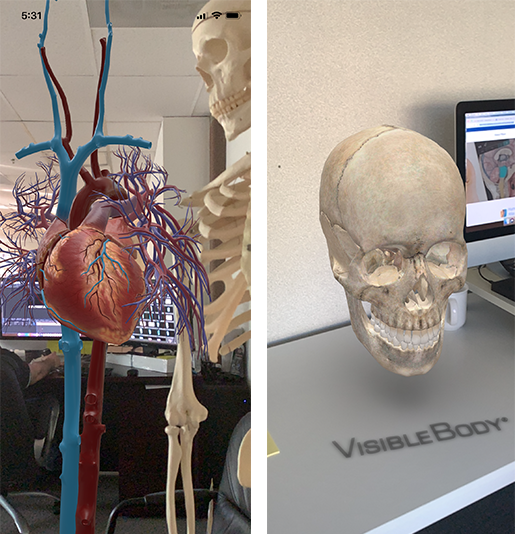 The interactive human body models are viewable on Visible Body web pages used by consumers, students, and instructors searching for a highly visual and interactive introduction to human anatomy and physiology. The AR feature is available on compatible phones and tablets, and the models can also be viewed and manipulated on-screen on laptops and desktops. Frequently searched-for topics include the bones of the skull, muscle actions that flex the biceps, and the heart.