IBS and IBD: What's the Difference?

Did you know that around 10-15% of people suffer from IBS (irritable bowel syndrome)? Many people don’t even know they suffer from this common gastrointestinal disorder. Since 1997, the International Foundation for Gastrointestinal Disorders has designated April as IBS awareness month, to spread the word about the symptoms and treatment options.

In this blog post, we’re going to do something similar, but with a twist. When you see the IBS acronym, you might also think about another series of letters that is often present in conversations about gastrointestinal pathologies: IBD (inflammatory bowel disease). It’s important not to confuse IBS with IBD, so we’ll walk through the basic profile of each type of disorder and talk about the symptoms, causes, and typical treatment options.

IBS stands for irritable bowel syndrome, a condition characterized by abdominal pain and a change in bowel habits such as diarrhea or constipation. Diarrhea and constipation on their own aren’t necessarily indicative of IBS, but they are certainly key symptoms. In cases of IBS, these altered bowel habits occur with cramp-like abdominal pain or discomfort, bloating, or a sense of gaseousness. Urgency and mucus in the stool are also common symptoms. As far as researchers know right now, having IBS doesn’t come with an increased risk of developing colon cancer. Although the symptoms of IBS aren’t life-threatening, they are painful, and can negatively affect one’s quality of life.

IBS can have a range of different triggers, including specific foods, stress, GI infections, and menstruation. Its ultimate cause isn’t known, but generally, the changes in “colonic motility and sensation” that result in pain and diarrhea or constipation are thought to be due to disruption in the communication between the brain and the gut. This might sound strange, but the digestive system is a lot more connected to the nervous system than you might think! The GI tract contains around 100 million neurons, which are part of the autonomic nervous system. This part of the ANS is often referred to as the enteric nervous system, or ENS. The ENS regulates secretion, blood flow, and motility within the digestive tract, and it sends important information such as stomach acidity and gut wall tension back to the central nervous system. The vagus nerve, one of the cranial nerves, plays a major role in relaying messages between the brain and the gut.

IBS is diagnosed mostly by a medical professional’s evaluation of reported symptoms according to the Rome scale. Essentially, this boils down to IBS being likely if a person experiences abdominal pain for at least several months and that pain is connected with changes in bowel movement frequency, and is relieved with defecation.

Risk factors for IBS include a family history of IBS (it’s likely that your genes can make you predisposed to IBS), chronic stress, or a recent intestinal infection.

There is no one size fits all treatment for IBS—patients work with their healthcare team to find what works. Sometimes that means a change in diet to avoid foods that trigger their IBS symptoms. Other times, it can include medications that ease symptoms such as diarrhea and constipation. Sometimes low-doses of certain antidepressants can lessen IBS pain. For IBS sufferers who are experiencing chronic stress or anxiety, mental health counseling, cognitive-behavioral therapy, and/or treatment with medication for anxiety might also provide some relief.

IBD, or inflammatory bowel disease, also involves significant abdominal pain, but is much rarer and leads to more dangerous complications than IBS. IBD carries with it an increased risk of colon cancer as well as an increased likelihood of developing abscesses, ulcers, and bowel obstructions. The inflammation and damage IBD causes to the intestines can also lead to problems with absorbing water and nutrients.

There are two conditions that are classified as IBD: ulcerative colitis (UC) and Crohn’s Disease. In 2015, around 1.3% of adults in the US (around 3 million people) were diagnosed with one of these two conditions.

Both UC and Crohn’s are caused by chronic inflammation in the gastrointestinal tract. The main distinction between them is where in the GI tract damage occurs and which layers of the lining of the GI tract are affected.

In UC, inflammation occurs in the large intestine and rectum, usually beginning in the rectum and spreading upwards into the colon. The inflammation causes abscesses in the mucosa (lining) of the colon, and these abscesses turn into ulcers that leak pus and blood. Even once the ulcers have healed, fibrosis and scarring can still cause problems, such as flattening the haustral folds. 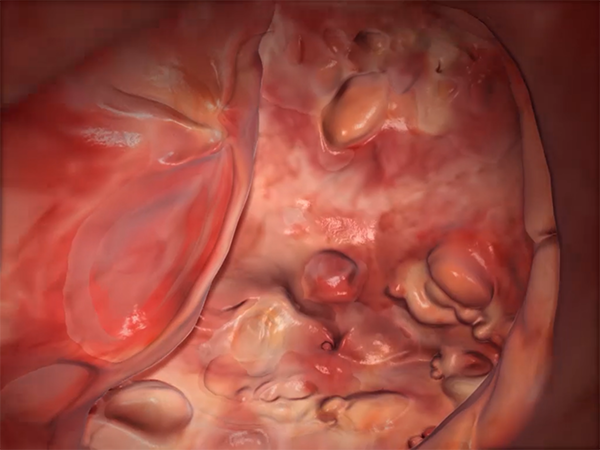 Inflammation in the large intestine in UC. Image from Physiology & Pathology.

Crohn’s Disease causes edema (fluid retention) and abscesses in the GI tract that can interfere with its proper functioning. Though it can occur anywhere in the small or large intestine, the damage in Crohn’s usually occurs higher in the GI tract (especially in the portion of the small intestine right before the colon). Ulcerations form in various places on the inner intestinal lining, giving damaged areas a patchy appearance. Scarring and fibrosis can cause problems in Crohn’s too, leading to thickening of the intestinal wall and consequent narrowing of the lumen (the space inside the intestine that waste moves through). 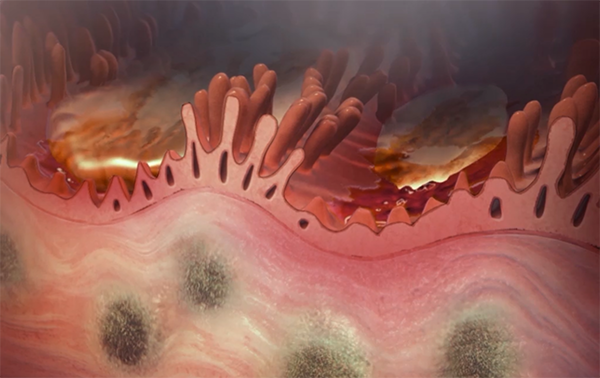 Damage to the lining of the small intestine in Crohn’s. Image from Physiology & Pathology.

The exact cause of IBD isn’t known, but the source of inflammation is typically the immune system reacting to some kind of environmental trigger—that is, the immune system attacks an otherwise harmless substance. Like IBS, there is likely a genetic component to IBD, since a family history of IBD increases a person’s likelihood of having IBD. According to the Crohn’s and Colitis Foundation of America, IBD symptoms are brought on by an environmental trigger combined with “an imbalance of intestinal bacteria and an inappropriate reaction from the immune system.”

Treatment for IBD usually involves diet changes to avoid foods that aggravate symptoms and medication to reduce inflammation or alter the immune system’s response. In severe cases, surgery is used to remove parts of the digestive tract that have become damaged.

Want to learn more about the digestive system and the pathologies that affect it? Check out these related blog posts:

We also have eBooks about the digestive system as a whole and specifically about the small intestine and the FAST exam!