If you just can’t get enough of our Physiology & Pathology sneak-previews, you’re in luck! Today, we’re going to be using Visible Body’s newest app to take a look at 5 common gastrointestinal pathologies. We’ll talk about their causes, symptoms, and the ways they’re typically treated.

Just to give you fair warning—these are not for the faint of heart (or stomach).

Hemorrhoids develop when the veins around the anus and/or lower rectum become swollen and inflamed. This is the result of increased pressure in the lower anus, which is often caused by straining during bowel movements or chronic diarrhea or constipation.

Hemorrhoids can be either internal (within the anus) or external (under the skin outside the anus). Further straining can cause the hemorrhoids to bleed. Hemorrhoids aren’t the only condition that can cause bleeding during defecation—if you see blood in your stool, it’s important to talk to a medical professional ASAP. 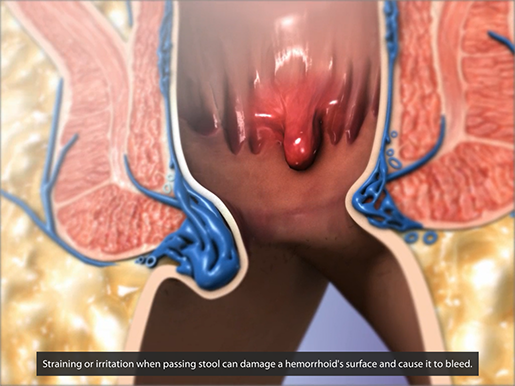 Usually, hemorrhoids are just uncomfortable and inconvenient. They can be treated at home with the help of OTC creams, pain killers, and/or sitz baths (along with a high-fiber diet). Particularly painful and persistent hemorrhoids are often removed via minimally invasive procedures such as rubber band ligation, injection, and coagulation.

Some good ways of preventing hemorrhoids are eating a diet rich in fiber, drinking plenty of water, exercising, and trying not to strain while passing a bowel movement.

A peptic ulcer is a lesion in the mucosal layer of the upper GI tract (stomach or duodenum). The most common cause for these lesions is a Helicobacter pylori (H. pylori) infection, although irritants such as alcohol or aspirin can also contribute to the development of a peptic ulcer. 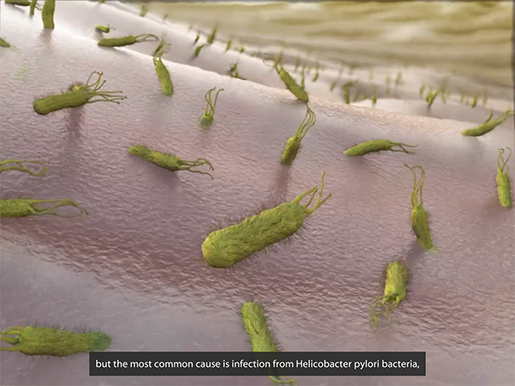 H. pylori up to no good. Animation screenshot from Physiology & Pathology.

H. pylori irritates the mucosa and liquefies the mucus protecting it. All the while, the stomach produces even more acid, and this acid eventually gets through the mucous layer and starts digesting part of the mucosa. The more digestion occurs, the more the stomach wall gets eaten away. Ow. In especially severe cases, bleeding or GI obstruction can occur.

Stomach pain, indigestion, and nausea are all common symptoms.

If H. pylori is the cause of the ulcer, getting rid of it with an antibiotic is often where treatment starts. Then, in order to let the ulcer heal, medications that reduce the amount of acid the stomach produces or releases—such as proton pump inhibitors (PPIs) and histamine (H-2) blockers—are often used. Antacids, which provide pain relief by neutralizing stomach acids, might also be recommended for temporary relief of symptoms.

In cases of ulcerative colitis, inflammation causes abscesses to form in the mucosa of the colon. This leads to ulceration of the intestinal lining and the leakage of pus and blood. Ulceration usually starts in the rectum and works its way back. Scarring and fibrosis (growth of extra connective tissue) from the healing of these ulcers can cause flattening of the haustral folds.

Crohn’s disease can occur in various areas of the large and small intestines. It causes inflammation, abscesses, and edema (accumulation of fluids). Ulcerations and patchy lymphoid areas can be found on the inner intestinal lining. Fibrosis can lead to the narrowing of the lumen (the space inside the intestine).

Overall, inflammation and damage make it more difficult for the intestines to absorb water and nutrients. This can lead to unpleasant symptoms such as diarrhea.

4. Cirrhosis of the liver

Irreparable damage to the liver, referred to as cirrhosis, can occur as a result of prolonged exposure to toxins absorbed into the bloodstream from the GI tract. Perhaps the most commonly discussed cause of cirrhosis is high levels of alcohol exposure over time. Hepatitis and autoimmune disorders can also lead to cirrhosis, though this is less common.

A cirrhotic liver has a “bumpy” appearance because when toxins damage the lobules of the liver tissue and irregular nodules, fibrotic scar tissue, and fatty deposits accumulate as the damaged tissue tries to heal. All of this impairs the liver’s function of regulating and detoxifying the contents of the blood. Consequently, problems can arise in all the other body systems.

In addition, blood vessels inside a cirrhotic liver can be compressed or even blocked, leading to a condition called portal hypertension, in which there is a severe increase in blood pressure in the hepatic portal vein. This can affect the vessels that feed the hepatic portal vein and cause splenomegaly (swelling of the spleen). In addition, vessels in the GI tract can dilate, becoming swollen and enlarged.

Colorectal cancer is the third most common cancer (excluding skin cancers) diagnosed in both men and women in the US. Though the American Cancer Society predicts that colorectal cancer is “expected to cause about 51,020 deaths during 2019,” early detection and treatment have greatly improved in recent years.

Colorectal cancer starts with (initially benign) polyps in the epithelial lining of the colon. 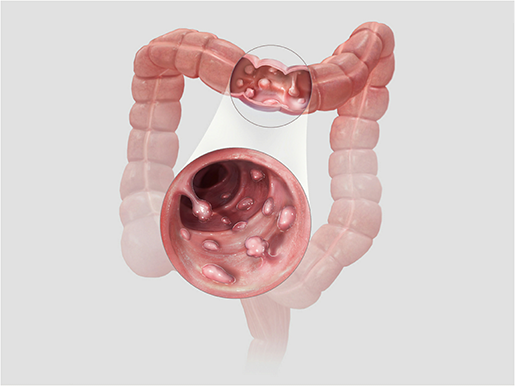 Polyps in the colon. Illustration from Physiology & Pathology.

Over time, these polyps can become cancerous and develop into tumors (adenocarcinoma). These tumors usually stay polyp-like (polypoid) in the right side of the colon. Initial symptoms of polypoid adenocarcinoma include bloody stool, anemia, weight loss, and fatigue. Tumors in the left side of the colon tend to grow circumferentially, eventually narrowing the lumen and causing constipation and intestinal obstruction.

Cancer in all its forms is serious. However, if caught and treated early, colorectal cancer generally has a fairly good prognosis. If left undetected and untreated, it can metastasize to other parts of the body (such as the liver) and become an even more serious problem.

The digestive system may not be glamorous, but keeping it healthy is definitely important! If you want to learn about even more pathologies that can affect the GI tract, as well as how the body absorbs nutrients and expels waste, check out the gastrointestinal unit in Physiology & Pathology!