3 Dental Facts That Won’t Set Your Teeth on Edge

Between shopping for plastic vampire fangs and worrying that chewy candy might yank out a filling, we’ve been thinking a lot about teeth this Halloween.

We don’t always treat our teeth and gums like the important body parts they are. Oral health has a strong influence on overall health, and vice versa: for example, gum disease is linked to heart disease, and bacteria in the mouth can allow bacteria to enter the bloodstream. Tooth-brushing habits even seem connected to atrial fibrillation and heart failure.

In 2000, the Office of the Surgeon General released the first Report on Oral Health, and they put it perfectly:

“Just as we now understand that nature and nurture are inextricably linked, and mind and body are both expressions of our human biology, so, too, we must recognize that oral health and general health are inseparable.”

In addition to physical health, things like tooth loss and discoloration come with heavy social stigma. Judgment and fear of judgment can keep people from living their best lives. That doesn’t just mean that some people are too embarrassed to smile—negative effects can reach all parts of life. In a 2008 study, health economists estimated that, for a woman, the loss of one tooth could cause an earnings loss of $720/year.

So let’s give credit where credit is due and celebrate teeth with three fun facts!

For much of history, dentistry was treated like a fun technological challenge rather than a medical field. Dental professionals were usually people with another career who worked on teeth on the side. In fact, Paul Revere tended to teeth—in an advertisement in the Boston Gazette in 1768, Revere bragged that he had “fixt some Hundreds of Teeth” just as well as “any Surgeon-Dentist who come from London.”

Revere was a silversmith by trade, which meant that he had the skills to create and fit artificial teeth. Why not clean teeth, too?

A similar logic went for barbers: they’ve already got a bunch of sharp knives, so why not use them to perform surgeries and yank out rotten teeth? 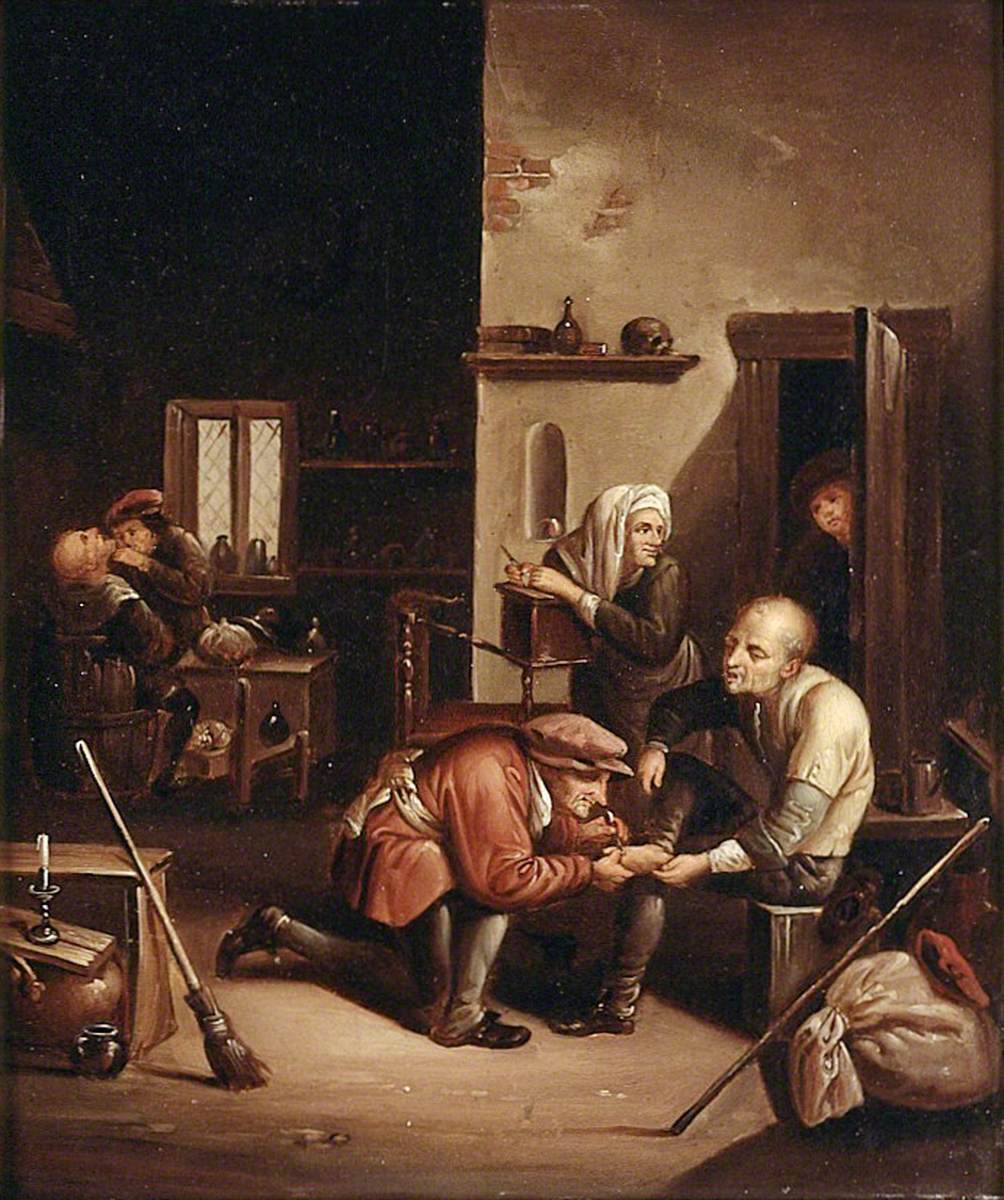 Picture courtesy of the Wellcome Collection.

In ye olde times of yore, your barber was more than the guy who cuts your hair. In the Middle Ages in Europe, there were two kinds of barbers: surgeons and surgeon-barbers. Surgeons performed surgeries (duh), since doctors felt it was beneath them to do surgery. Surgeon-barbers did lower-stakes medical interventions like administering leeches and removing teeth.

The traditional barber’s pole colors represent some of what these old-fashioned barbers could do: red for bloodletting, white for bone setting and dentistry, and blue for a nice shave.

Barbers and others practicing early dentistry mostly pulled painful teeth; preventative care was an afterthought. Instead of a row of shiny, sanitized instruments, your barber would use wooden toothpicks, pieces of cloth, and aqua fortis to clean up your mouth. Aqua fortis, also known as nitric acid, whitened teeth by corroding the enamel. This left teeth even more vulnerable to decay.

Medieval dentistry was a bloody practice with a high body count. Infection ran rampant, and neither barbers nor doctors were equipped to handle it.

The average barber was considered more of a craftsman than a medical professional, and they learned their trade through apprenticeships. The 1700s saw the rise of the term dentist to refer to tooth practitioners, and an increase of sugar consumption during this time may have caused the soar in dental services’ popularity.

In 1840, the first dental school was founded in Baltimore, Maryland, signaling the professionalization of dentistry. The Baltimore College of Dental Surgery began issuing the first doctor of dental surgery (DDS) degrees, and further certification programs and professional requirements followed. Dentists became their own exclusive profession, and dentistry no longer was a side gig for an industrious barber—or, in Paul Revere’s case, silversmith.

When you see someone in a Sweeney Todd costume this Halloween, think about how he would have been responsible for pulling teeth as well. Yikes!

2. Front teeth gaps can be hereditary

Diastema simply means a gap between teeth, but in humans, it’s used as shorthand for maxillary midline diastema: the gap between the two front teeth, aka the upper central incisors. It is one of the most common malocclusions, or misalignments, of the teeth. It’s also considered by some to be a sign of beauty. 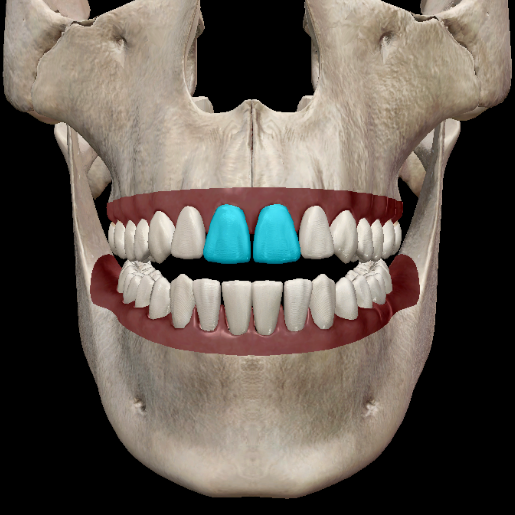 Diastemas are especially common in children, but they usually close up as the eruption of lateral incisors and canines shift the teeth around. Some people call the ages between seven and 12 the “ugly duckling stage” as kids’ teeth are spaced out and funkier-looking than an adult’s.

Why do teeth move around? Well, teeth are just like people: they give in to pressure.

That pressure can be obvious—a child who sucks their thumb might pull their front teeth forward, and the wires on your braces provide enough tension to pull your teeth into the ideal spot. Losing a tooth means that the pressure it provided is gone, so it can cause the other teeth to rearrange around the gap.

Pressure can also be less obvious. Pressure can come in forms like the size of your jaw, the size of teeth, and your bite. Those internal elements are all tied to your genetics: if your parents have the perfect storm of conditions to create a diastema, you probably do, too. 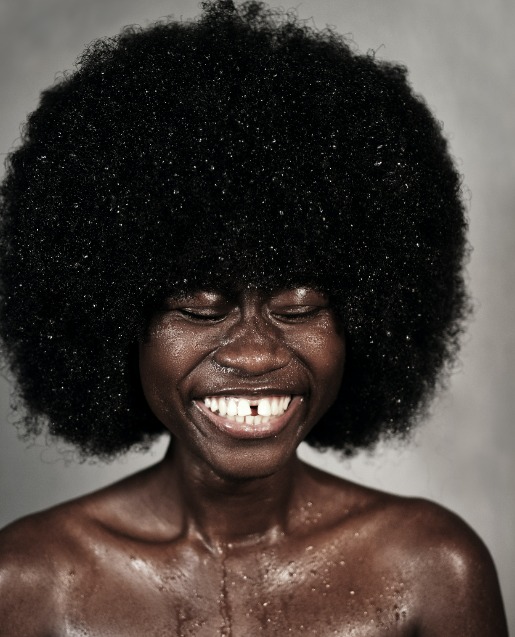 Photo by Shantisha from Pexels.

If you get a one-time correction for a diastema, it’s very easy to relapse. Because of the mouth’s system of pressure, the front teeth are likely to gradually spread apart again if nothing is there to keep them together. One fix for this is to install a small, permanent retainer on the back of the front teeth to hold them together.

Some people are proud of their tooth gaps. In some African countries like Nigeria and Ghana, a diastema is a sign of beauty, especially in women. Because of this, some people will intentionally try to create or widen their diastema instead of seeking a cosmetic fix.

3. We don't know why teeth erupt

Experts still aren’t certain about what makes teeth erupt or why they erupt when they do. But before we can plunge into the unknown, we need to look at what we do know about tooth eruption.

Your chompers begin developing before birth, but babies are not typically born with visible teeth. Visible teeth at birth are called natal teeth, and they are more likely to appear in children with growth-related health problems. These teeth lack a strong root and are usually extracted to prevent the baby from inhaling their own tooth if it were to dislodge.

Volcano imagery aside, eruption is the process of a tooth shifting from its nonfunctional position within the jaw to its useful, visible position in the mouth. Teeth tend to erupt in pairs. The first teeth to erupt are lower central incisors around 6-10 months, followed by their upper jaw cousins.

Primary teeth, also known as baby teeth or milk teeth, are smaller and whiter than their grown-up counterparts, and in addition to chewing, they add structure to the face. We don’t often think about our outward appearances as being dictated by teeth, but they help fill out the lower portion of our faces. Primary teeth also help hold a place in the jaw for permanent teeth.

Humans have 20 primary teeth, followed by 32 permanent teeth. The first permanent teeth without baby tooth equivalents start erupting at age six, appropriately called six-year molars. The last teeth to appear on the scene are the third molars, also called wisdom teeth, which erupt between the ages of 17 and 25. 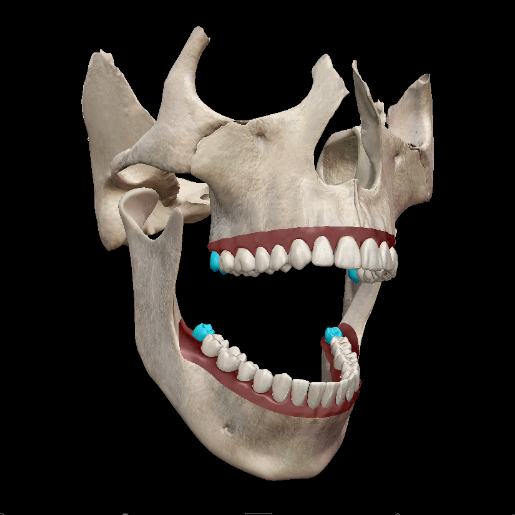 Long before modern dentistry, people noticed these patterns of tooth eruption. Around the world, parents have dealt with crying, teething babies and have created folksy names like “wisdom teeth” to describe the third molars.

We know the patterns of tooth eruption—we’ve known about them for centuries. We don’t understand why. Why do teeth erupt at particular times in life, and what forces trigger those eruptions?

The development of the mouth and jaw is like a complicated dance between muscle, tooth, bone, nerve, and the gingiva, or gums. There are many factors at play as these parts have to grow without stepping on the others’ toes, so to speak. This makes it a challenge to pinpoint the cause of these toothy milestones.

One of the first theories was proposed by prolific anatomist Harry Sicher. The cushioned hammock theory suggests that there is a ligament (the cushioned hammock ligament) beneath the tooth that is responsible for eruption. This was widely taught in the 1930s and 50s, until it was discovered that the “ligament” Sicher saw under his microscope was an error, just a byproduct of making the slides.

Sicher was debunked, but several theories of tooth eruption still exist, so many that to list them would be way too boring. These theories examine which forces generate the movement of the tooth through the gingiva as well as how elements like the dental follicle and nerves interact to trigger eruption.

Teeth doing what they do best: chewing!

A new study published in October 2021 may have figured out part of the puzzle. Through using biomechanical models of skulls, researchers examined growth rates of chewing muscles in over 20 different primate species. That’s right, non-human primates also have primary teeth and permanent teeth, and their molars grow on schedule, too. The researchers found that facial growth and chewing muscles determine when permanent molars emerge, because the molars emerge in windows of time where they won’t be interfered with muscle growth. One author describes this as the “sweet spot” in time where molars can poke through without negative effect.

Tooth eruption happens to everyone dozens of times, but we still have a lot to learn about this process.

Historically, teeth haven’t been treated as they should. It took until 1840 for professional study of dentistry to take off, and before that, treating teeth was one skill of many. This omission is especially remarkable because of how complicated the mouth can be. The angle and location of teeth can be changed by a number of factors, some of which are determined by genetics. The mechanics of the mouth also influence when teeth erupt—though we aren’t quite sure how yet.

As Halloween begins and we enter the season of sugary treats, remember to take care of your teeth, ’cause they’re trying their best.