How do we get from stem cells in the developing brain to multiple types of neurons that form initial networks with one another? It’s a question with a complex answer.

Well, what if I told you that a team of researchers was able to watch the development of a living creature’s nervous system? In a recent paper published in Cell Press, scientists were able to capture on video(!) the development of the brain in zebrafish embryos. In their own words, they used a special imaging technique to track “neuron lineages, movements, molecular identities, and activity in the entire developing zebrafish spinal cord, from neurogenesis until the emergence of patterned activity instructing the earliest spontaneous motor behavior.”

(Also, it’s not as cool as being able to watch a nervous system develop, but I figured I’d mention that the zebrafish's’ cells had been engineered to glow. How awesome is that?)

It’s obvious that zebrafish aren’t humans, but they are used in a lot of scientific research. In an imaging study like this one, their quickly-growing, transparent embryos were probably particularly useful.

In humans, nervous system development ramps up around week 5 of embryonic growth. This is when a process called neurulation occurs. During this process, a structure called the neural tube forms—its anterior end will become the brain, and the rest will become the spinal cord. 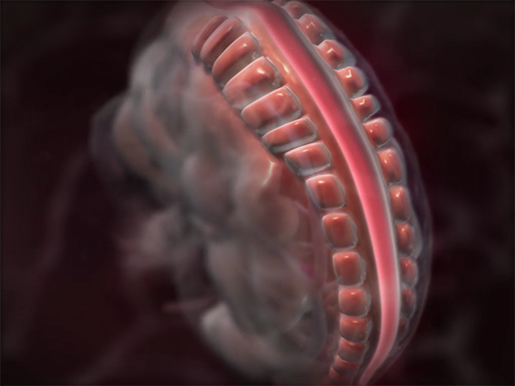 Formation of the neural tube during embryonic development. Animation screenshot from A&P.

Neurons and the glial cells that support them arise from neural and glial precursor cells, respectively. Early on, these precursor cells divide rapidly, mostly into more precursor cells. Eventually, though, neurons are produced. These baby brain cells will migrate to their final homes within the nervous system.

Depending on intrinsic and extrinsic factors that influence gene expression, the neurons will take on different functions. Neurons that originate in different places and at different times will also have different functions. For example, the earliest-born neurons usually reside in the deepest layers of the cortex, while younger neurons crawl on past them to settle in the outer layers.

Once the neurons have reached their final positions, they begin to form connections with one another. They develop dendrites (the parts of the neuron that receive incoming signals from other neurons) and axons (the long, tail-like portion of a neuron that a signal travels down). A structure called a growth cone guides the axon of a maturing neuron to stretch in a particular direction. 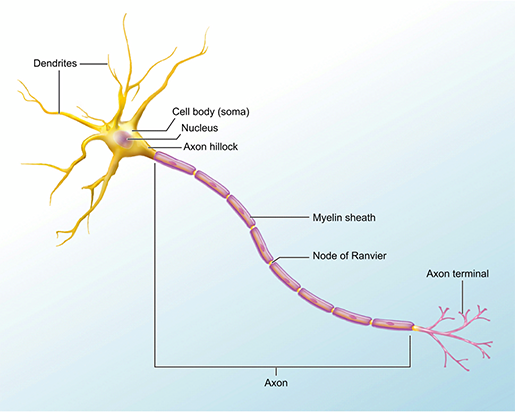 So what did the scientists learn from observing the zebrafish embryos? Their images showed them “cells on the move and finding their places, then assuming specific roles and wiring together into circuits,” giving them a front-row seat for the processes of migration, differentiation, and the initial function of neurons in a developing nervous system.

Since they knew that the motor circuit in the spinal cord (which includes motor neurons and interneurons) is the first circuit to develop in fish, that was the one they chose to focus on. Interestingly—and to their surprise—they found that motor neurons were the first ones to start sending messages.

Ultimately, the team’s advanced imaging technique allowed them to examine the development of neurons and their function at the same time, giving them insight into the emergence of neuron function during development.

Want to learn more about the nervous system and embryonic development?