The brainstem oversees the activities of the autonomic nervous system, which controls the body's involuntary functions.

Navigating the Nervous System Part I: The CNS, PNS, and Somatic Motor Control

All the terminology that gets thrown around when you’re studying the nervous system can be a little overwhelming. Autonomic, parasympathetic, somatic, peripheral...how many nervous systems can one person have?!

Well, if you’re feeling lost among the branches, never fear! The easiest way to get un-lost is to make a map, and that’s what we’re going to do today.

It turns out that when we say “the” nervous system, we’re really referring to one entity that has a bunch of different divisions that work together to achieve a common goal (keeping you alive). The map we’re creating is going to help us learn about all of these different pieces of the nervous system, what they do, and how they communicate with each other.

The CNS and PNS

The biggest and most basic distinction we make when talking about the nervous system is the one between the Central Nervous System (CNS) and the Peripheral Nervous System (PNS), so that’s where we’re going to start our map. I placed the CNS a little higher than the PNS because even though the PNS isn’t part of the CNS, the CNS is technically “in charge.”

The CNS is composed of the brain and the spinal cord. That’s it—all the other pieces of the nervous system belong to the PNS. You can see this distinction in the image below.

Because I’m into both metaphors and Star Trek, let’s think of the CNS as Starfleet Command and the PNS as all the exploratory vessels and research stations scattered throughout the galaxy. These starships and stations interact with alien lifeforms, distant planets, and weird space anomalies, then send reports back to Starfleet HQ on Earth. The officials there issue orders when problems arise.

Afferent and Efferent Pathways of the PNS

The PNS has two different kinds of pathways: sensory (afferent) and motor (efferent), and we’re going to add those to the map next. 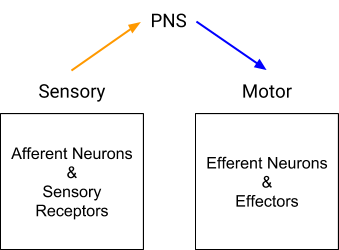 Sensory neurons relay information about stimuli such as temperature, pressure, light, pain, and certain chemicals back to the brain. They are (in some cases literally) the eyes and ears of the nervous system, collecting information and keeping the CNS informed so it can formulate reactions. 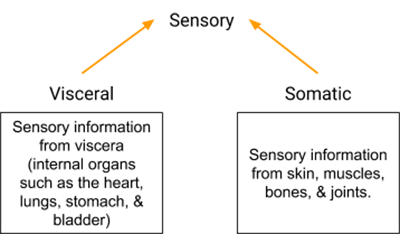 There are two main flavors of sensory input received by the PNS: somatic and visceral. Somatic sensory input comes from the receptors of the eyes, ears, nose, tongue, and skin. These organs transmit information we associate with the five senses. Visceral sensory input comes from (surprise!) the viscera, or internal organs. Sensory neurons keep close tabs on the heart, lungs, stomach, and bladder so that the CNS can manage their regulation.

Motor neurons send signals in the opposite direction from sensory ones, transmitting commands from the brain to control the contraction of smooth, skeletal, and cardiac muscles.

The motor division of the PNS also has visceral and somatic branches.

The key difference between these is that the somatic motor division sends voluntary commands to skeletal muscles. It’s the part of the nervous system we have the most conscious control over, with neural messages traveling from the primary motor cortex in the brain down through the spinal cord to the efferent neurons of the PNS. If you want to know more about the interactions between neurons and skeletal muscles, check out this post. 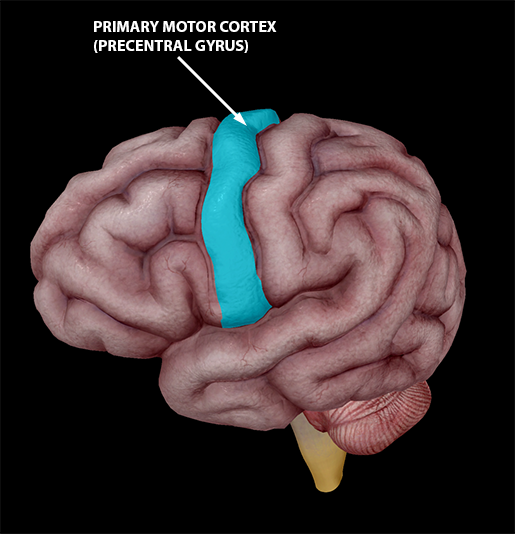 The only involuntary movements associated with the somatic motor division are somatic reflexes, such as when you touch something hot and you pull your hand away without thinking about it.

What We've Got So Far

Let’s pause and take a look at how our map’s doing.

We’ve covered how the CNS and PNS exchange sensory and motor information, and how the PNS collects information from the sensory neurons in its afferent pathways and relays motor commands from the CNS out to the muscles and organs of the body. We also talked about how the somatic motor division of the PNS involves (mostly) conscious muscle movements and how the visceral motor division (ANS) handles involuntary muscle movements.

Because the Autonomic Nervous System is pretty complicated, we’re going to stop here for today and explore it in Part II of this article. So tune in next week for an in-depth discussion of the divisions of the ANS and the completion of the map—same VB time, same VB channel.