The Endocrine System: The Thyroid and Parathyroids

The thyroid gland: it’s the beautiful butterfly of the endocrine system, and without it, regulating your body’s metabolism would be tough. There are also these cute little nubs coming off of the thyroid called the parathyroid glands. They don’t get nearly as much love as they deserve for all that they do to help your body keep its calcium levels under control.

Today we’re going to get into the nitty-gritty details about the role the thyroid plays in metabolic regulation. We’ll also talk about what the parathyroids do, and what happens when they’re not able to do it properly. Once you’re done reading this post, you’ll be able to impress all your friends by telling them about the differences between the thyroid and parathyroids. (Honestly, they’ll probably be impressed that you know what the parathyroids do at all!).

How the thyroid works 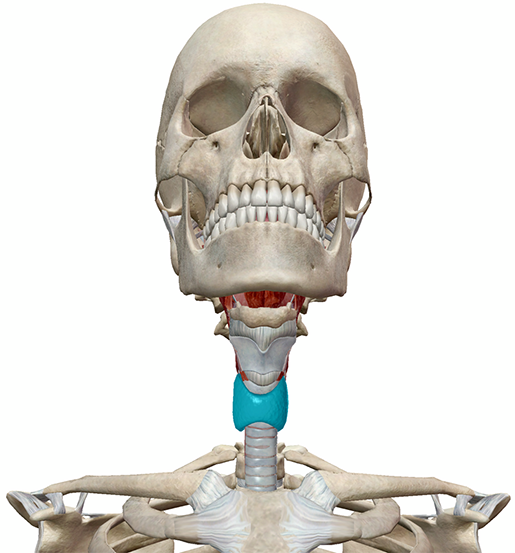 On second thought, the thyroid may not be as graceful as a butterfly. It’s probably much squishier. Its two lobes may look like wings, but their tissue is made up of follicles that are filled with a sticky fluid called colloid. However, it’s within this fluid that the magic of thyroid hormone production happens.

It’s pretty common knowledge that the thyroid has something to do with your metabolism, so let’s delve into that something.

First of all, the thyroid needs iodine to do its job. The fact that the body can’t make iodine on its own might seem like a roadblock here, but most people get the iodine they need through their diet. It’s found in foods such as iodized table salt, dairy products (yes, froyo counts), seaweed, fish, soy products, and eggs. Some multivitamins also contain iodine.

The thyroid uses the iodine it takes in to manufacture two hormones: thyroxine (T4), which is about 80% of its output, and triiodothyronine (T3), which is the remaining 20%. Even though less T3 is produced, it’s about four times more potent than T4.

These hormones hang out in the colloid-containing part of the thyroid follicles until they’re needed in the body. Once they’re released into the bloodstream, the thyroid hormones make their way into the body’s cells and bind to receptors on the mitochondria. Here, they “cause an increase in nutrient breakdown and the use of oxygen to make ATP.” They’re basically a power-up for cellular respiration (cue Mario mushroom sounds). Thyroid hormones are also necessary for synthesizing proteins and for tissue growth and development for fetuses in utero and for children.

But you were all of you deceived, for another hormone was made. (Sorry, I’m a Lord of the Rings nerd and I can’t help myself.)

How the hypothalamus and pituitary gland regulate thyroid hormone release

This just wouldn’t be a discussion about the endocrine system if it didn’t include the masterminds of hormone release: the hypothalamus and the pituitary gland, two structures in the brain. 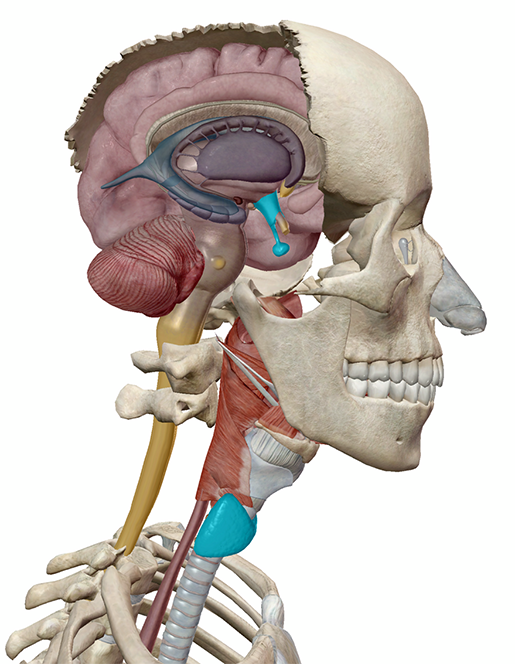 When levels of thyroid hormones in the bloodstream become low, the hypothalamus is the first to spring into action, producing a hormone called TRH (thyrotropin-releasing hormone). This signals the the hypothalamus’ good buddy the pituitary gland to release TSH (thyroid stimulating hormone). 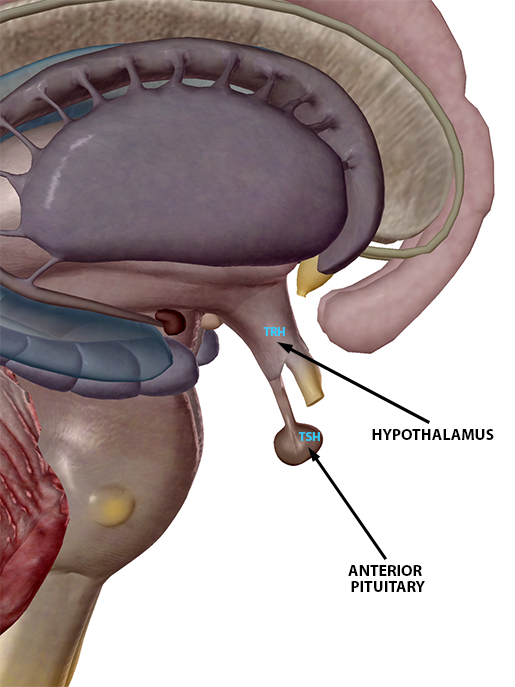 TSH is the messenger from the brain that tells the thyroid to make and release more T4 and T3. Once the levels of thyroid hormones in the blood have increased sufficiently, the pituitary gland stops releasing TSH.

Generally, iodine deficiency isn’t too big a problem in the US, but many cases of hypothyroidism around the world are caused by a lack of iodine in the diet. If a person doesn’t get enough iodine, their thyroid will keep trying to produce hormones. This can lead to a goiter (an enlarged thyroid gland). Also, it’s important for those who are pregnant to make sure they’re getting enough iodine, since in severe cases, iodine deficiency can endanger the health, or even life, of a developing fetus.

Hypothyroidism has other causes aside from iodine deficiency. Hashimoto’s disease, an autoimmune condition, is the most common cause of hypothyroidism here in the US. No matter the cause, if the thyroid gland isn’t producing enough hormones, symptoms like fatigue, weakness, weight gain, depression, slow heartbeat, constipation, and increased sensitivity to cold may occur. Doctors usually diagnose hypothyroidism with blood tests to measure TSH and thyroid hormone levels. Usually, thyroid hormone pills are used to treat an underactive thyroid gland.

How the parathyroid glands work

The parathyroid glands can usually be found on the thyroid gland’s posterior surface. Most people have four of them, although it’s not unheard of to have more (in other tissues of the neck and chest). 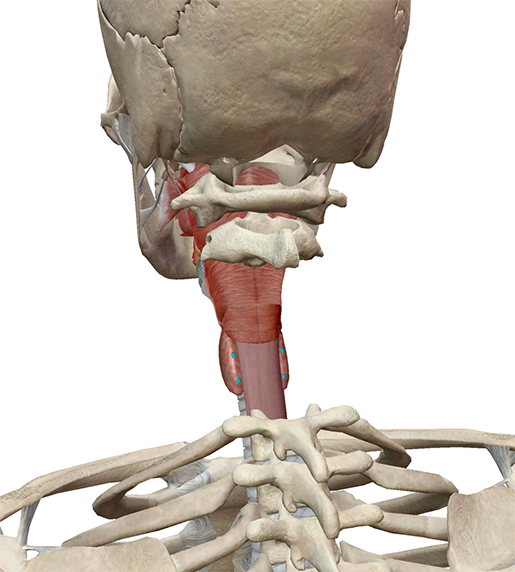 Chief cells, the epithelial cells of the parathyroids, produce PTH (parathyroid hormone), which plays an important role in regulating the body’s calcium levels.

When levels of calcium in the blood are low, the parathyroids secrete PTH. Basically, if you want to boost calcium levels in the blood, PTH is the best hormone for the job. It can do this in multiple ways. 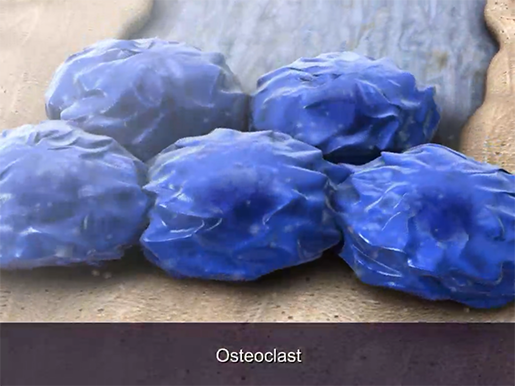 When blood calcium levels are sufficiently high, the release of PTH ceases.

In addition, the thyroid (note: NOT the parathyroid) secretes calcitonin in response to high blood calcium. Basically, calcitonin counteracts what PTH does. Calcitonin signals osteoclasts to stop breaking down bone tissue, tells the kidneys to ease up on calcium reabsorption, and slows down the absorption of calcium in the intestines.

Just like the thyroid, the parathyroid glands can either be over- or underactive.

When the parathyroid glands are doing their thing a little too well, hyperparathyroidism is the result. If too much PTH is produced, too much calcium will be released back into the blood from the bones. The resulting decrease in bone density can cause the bones to fracture or deform. Kidney stones might also result from excess calcium in the body.

Sometimes, a vitamin D or calcium deficiency in the diet can lead to the parathyroids over-producing PTH in an effort to boost the calcium levels in the blood. Kidney disease can also affect PTH production—if the kidneys can’t reabsorb enough calcium into the bloodstream, the resulting low blood calcium levels will keep PTH production going. The latter two cases are instances of secondary hyperparathyroidism.

Hypoparathyroidism is often the result of the surgical removal of the parathyroid glands. It can also result from an injury to the thyroid, or from surgery involving the thyroid. Because calcium is vital to proper neuromuscular function, low calcium levels (hypocalcemia) can be extremely dangerous, causing muscle spasms, convulsions, and even paralysis. If muscles involved in breathing are paralyzed, death can occur. Calcium supplements or infusions and vitamin D therapy are the usual avenues of treatment for hypoparathyroidism.

Recap: What's the difference between the thyroid and parathyroids?

We’ve talked about how the thyroid produces hormones that increase the base metabolic rate of cells in the body by attaching to their mitochondria and giving them a boost. The thyroid also produces calcitonin, which helps maintain calcium homeostasis.

While calcium regulation is a secondary function for the thyroid, it’s the parathyroids’ primary concern. It’s their job to make sure there’s enough calcium in the body for nerves and muscles to function.

And that’s all for now—we hope you’ve enjoyed this introduction to a few of your friendly neighborhood endocrine glands! You can meet a few more, such as the pineal gland, adrenal glands, and pancreas, in this blog post about the endocrine system. And if you’d like to learn more about the hypothalamus and pituitary gland in particular, check out this blog post.