The hypothalamus connects information from the nervous system to the hormone releases of the endocrine system.

The Endocrine System: Hypothalamus and Pituitary

Are you hot right now? Cold? Maybe you're like Goldilocks and are just right. What about your height? Are you tall? Average? Short? Maybe your metabolism is lightning fast and you're always hungry, or maybe it's a bit slow and you stay full longer. All of these—regardless of which one you identify with—are regulated by the endocrine system.

What is the endocrine system? It's a network of glands throughout the body that regulate certain body functions, including body temperature, metabolism, growth, and sexual development.

Want to learn more about glands and hormones? Check out our free Endocrine System eBook!

Though there are many glands, today we’ll focus on just two: the hypothalamus and the pituitary gland.

I'm going to be throwing a lot of information at you, dear reader, so brace yourself!

It’s no secret your brain is one busy place—neurons move at incredible speeds, synapses are constantly firing, blood is pumping, and glands are producing hormones. These glands, specifically the hypothalamus and pituitary, are working all the time to keep your body running at optimal performance. Every hormone the endocrine system releases follows a basic set-up: a signal is received, hormones are secreted, and the target cell undergoes changes to its basic functions.

The almond-sized hypothalamus is located below the thalamus and sits just above the brainstem. All vertebrate brains have a hypothalamus. Its primary function is to maintain homeostasis (stability of the internal environment) in the body.

The hypothalamus links the nervous and endocrine systems by way of the pituitary gland. Its function is to secrete releasing hormones and inhibiting hormones that stimulate or inhibit (like their names imply) production of hormones in the anterior pituitary. Specialized neuron clusters called neurosecretory cells in the hypothalamus produce the hormones Antidiuretic Hormone (ADH) and Oxytocin (OXT), and transport them to the pituitary, where they're stored for later release. 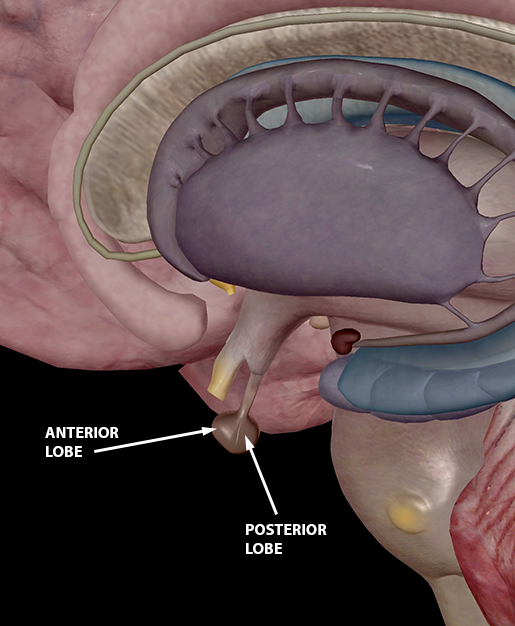 The anterior lobe (or adenophyophosis) secretes hormones that regulate a wide variety of bodily functions. There are five anterior pituitary cells that secrete seven hormones:

This table represents the types of hormones secreted by the cells of the anterior pituitary.

While the anterior lobe shoulders most of the work in producing hormones, the posterior lobe stores and releases only two: oxytocin and antidiuretic hormone (ADH), or vasopressin.

Even though it's very small, the pituitary gland isn't free from ailment—nothing is completely foolproof, after all.

Most disorders of the pituitary glands are tumors, which are common in adults. These growths are not  considered brain tumors, nor are they always malignant. In fact, they're almost always benign in nature! There are two types of pituitary tumors—secretory and non-secretory. A secretory tumor produces too much of a hormone, while a non-secretory tumor does not. Regardless, if the tumor is big enough, it can hinder normal pituitary function. These tumors can be removed, or monitored and controlled with medication.

While the pituitary and hypothalamus can run into the above issues, on the whole they work a balancing act on your body. So the next time you're feeling juuuust right, you can thank the pituitary, hypothalamus, and all the other organs of the endocrine system.