No Frog? No Prob! A 3D Visual Guide to Frog Anatomy

There’s a reason frog dissection is the quintessential biology lab: examining frog anatomy teaches students about how organ systems function in complex organisms, drawing similarities between frog anatomy and their own.

If your classroom doesn’t have access to frog dissection specimens, Visible Biology’s interactive 3D frog model can walk students through frog anatomy without prep or cleanup. It can also be a great way to prepare students for dissection, showing them structures they will see in 3D.

Visible Biology is available through Courseware, Visible Body’s LMS that can be used as standalone or integrated with Canvas or Blackboard. Through Courseware, instructors can use groundbreaking 3D models of biological concepts to create Flashcards, interactive Tours, dissection quizzes, and more!

This ribbit-ing blog post will walk through the frog model in Visible Biology and explore frog anatomy along the way. Let’s hop to it! 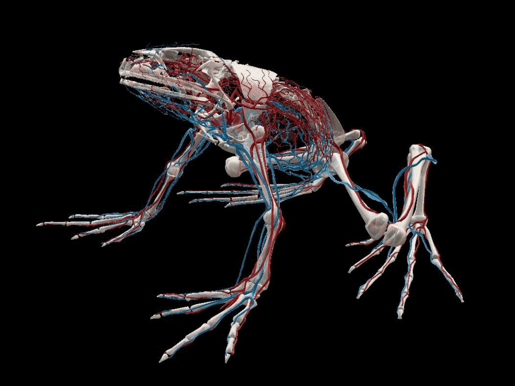 Next, let’s move on to the skeletal system. The frog’s skull is broad and flat, encasing and protecting the brain, and it uses its mandible (lower jaw) and the maxillary teeth of its upper jaw to hold on to prey. The body and forelimbs are supported by a series of bones we might recognize from their human body equivalents: the suprascapula bones attach to the scapulae, which connect the clavicle bones to the sternum. The front limbs consist of a humerus and a radio-ulna, and the frog’s wrist bones, or carpals, articulate with the radio-ulna. Four metacarpals extend from the carpals and end with phalanges, aka toes.

The frog’s vertebral column protects the spinal cord and supports the head, and it consists of nine vertebrae. The last vertebra, the sacral vertebra, fuses with the pelvic girdle to form a structure called the urostyle. The pelvic bones articulate with the hind limbs, acting as a spring to help the frog jump. The frog’s back legs consist of a femur and a tibio-fibula bone. The frog’s ankles are made of two rows of tarsals

Five metatarsals extend out from the tarsals, and the phalanges extend from the metatarsals. The bones in a frog’s feet are elongated, giving the frog more surface area to push off from when it jumps.

A frog’s mouth and jaw are moved by the temporalis, submaxillary, masseter, and depressor mandibulae muscles, which work to elevate and lower the mandible and open and close its mouth.

The frog’s retractable tongue catches prey and brings it into the oral cavity. The maxillary teeth and the vomerine teeth located on the roof of its mouth do not chew: a frog swallows its meal whole. Instead, the teeth hold prey still.

When the frog swallows, it passes food from the oral cavity and pharynx into the esophagus. The esophagus then passes the food into the stomach, where enzymes start to break down the food. Food then moves into the small intestine, where bile from the gallbladder and juices from the liver fully break down the food and nutrients are absorbed. Water is reabsorbed in the large intestine, and waste is excreted through the anus and into the cloaca. Waste exits the body through the cloaca, the cavity where products of the excretory and reproductive systems are released.

Fat bodies are the masses of fat that frogs contain in their body cavities. These stores of fat can be used when the frog has less food available, like during hibernation. 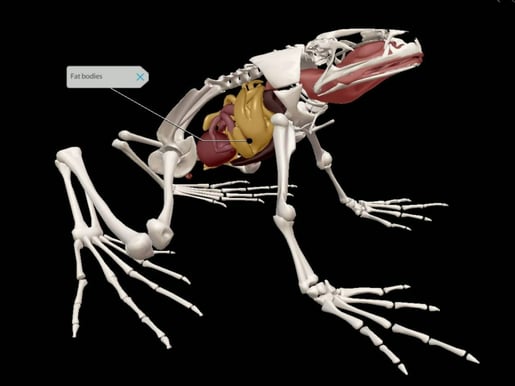 The adrenal glands are located ventral to the frog’s kidneys and secrete hormones that help with homeostasis. The kidneys filter waste products like urea out of the blood, producing urine. Urine flows through the ureters into the bladder, where it is stored before it’s excreted through the cloaca.

Let’s start with one of the frog’s most distinct features: those big ol’ eyes. Did you know that frogs have 360-degree vision? A frog’s eyes connect to the brain through optic nerves that stretch from the eye to the optic lobes in the forebrain. Transparent nictitating membranes act as third eyelids, protecting the eyes from debris and keeping them moist when the frog is out of water. 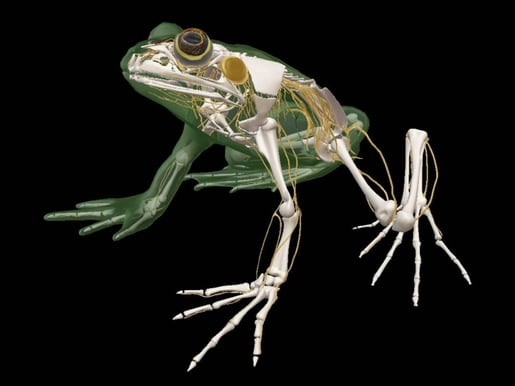 The frog’s brain is divided into the forebrain, midbrain, and hindbrain.

The forebrain contains the…

The midbrain contains the…

The hindbrain contains the…

The spinal cord extends from the medulla oblongata down the vertebral column. It processes the frog’s reflexes and conducts signals between the body and the brain.

The peripheral nervous system is typically made of 10 cranial nerves and 10 spinal nerves that carry sensory and motor signals between the brain and spinal cord.

Are you green with envy after seeing that frog model? Are you an instructor or administrator looking for resources for your course? Request an instructor code to try Visible Biology for yourself!

Visible Body supplies a rich library of free, premade teaching resources, and its attentive Customer Engagement team is available for one-on-one training sessions, so instructors who use Courseware are supported every step of the way. Visible Body offers premade Flashcard Decks, Tours, lab activities, and even premade courses that correlate to popular textbooks.

Read more and get some teaching inspiration on the blog!