A Look Inside Mitochondria: Components, Cellular Respiration, and Disorders

It’s the mantra of every biology classroom: The mitochondrion is the powerhouse of the cell. But what does that actually mean? 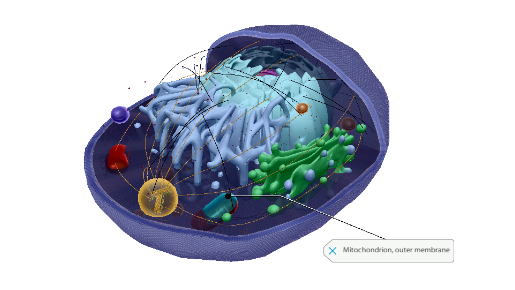 Mitochondrion in an animal cell. Image from Visible Biology.

Energy generation isn’t the only thing that makes mitochondria special. Most of a cell’s DNA is stored in the nucleus, but the mitochondrion has its own genome consisting of 37 genes. Many of those genes provide instructions on how to create the enzymes needed to make ATP, and the other genes provide instructions for transfer RNA and ribosomal RNA, which help turn amino acids into proteins. Scientists believe that mitochondria originated when a nucleated cell incorporated an aerobic prokaryote, creating a win-win situation: the cell received an efficient energy producer and the prokaryote received protection from the outside world. Millions of years later, the mitochondria generate most of the cell’s energy.

Let’s take a look at the parts of the mitochondrion, how they work together to power the cell, and what happens to the human body when mitochondria aren’t functioning properly.

Mitochondrion in a plant cell. Image from Visible Biology.

Blueprints of the Powerhouse

The inner membrane has a wrinkled surface that increases its surface area. The folds create structures called cristae.

Within the inner membrane lies the matrix. The matrix is more than just the Keanu Reeves franchise, it’s a viscous inner cavity that contains ribosomes, enzymes, and mitochondrial DNA. Thanks to the matrix, the mitochondria can synthesize proteins and reproduce independently of the cell at large. The matrix is also home to important phases of cellular respiration, the process that creates energy for the cell.

Cross-section of a mitochondrion from Visible Biology.

Put simply, cellular respiration is a series of processes that break down glucose into water and carbon dioxide. This process creates ATP molecules, which store energy for the cell to use.

Prokaryotic cells conduct cellular respiration in the cytoplasm, but in eukaryotic cells, the process begins in the cytosol and then moves to our friend the mitochondrion.

So let’s put on our legwarmers and start our aerobics—aerobic respiration, that is. Aerobic respiration happens in three major phases: glycolysis, the citric acid cycle, and oxidative phosphorylation, which includes the electron transport chain and chemiosmosis.

Glycolysis itself is a process of ten steps—five steps to prepare, five steps to create—but we’re going to keep it super simple here: glycolysis uses two ATP molecules to split a six-carbon glucose molecule into two three-carbon molecules which are then converted to pyruvate.

“But wait!” you might be thinking. “I thought cellular respiration was supposed to create ATP, not use it up?”

Well, glycolysis creates a bunch of things that will be useful for the cellular respiration journey ahead: pyruvates, NADH, and ATP—four ATP, to be exact, which means that through glycolysis there is a net gain of two ATP. 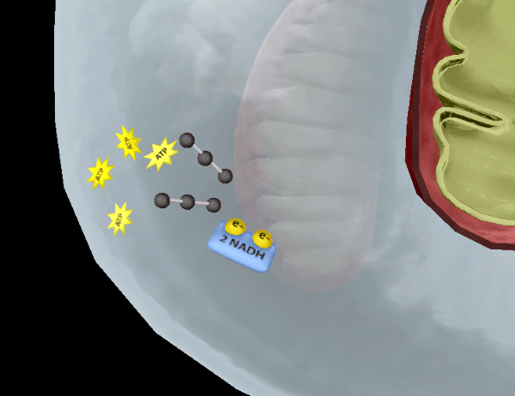 The end results of glycolysis, the first step in aerobic cellular respiration. Image from Visible Biology.

Pyruvate is oxidized, meaning it is combined with oxygen. Pyruvate has three carbon molecules; two oxygen atoms combine with one of those carbon atoms, breaking off and creating a carbon dioxide molecule. The pyruvate’s remaining carbon molecules become acetyl coenzyme A, also known as acetyl CoA. 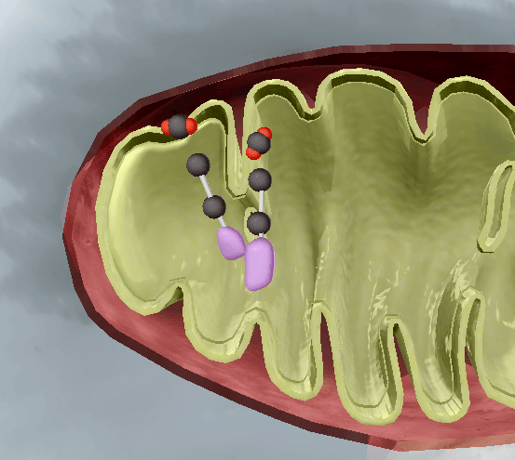 Carbon dioxide being released, and 2 acetyl-CoA molecules ready to begin the citric acid cycle inside a mitochondrion. Image from Visible Biology.

We’re back in the mitochondria! The citric acid cycle (also known as the Krebs cycle) takes place in the matrix. During the cycle, the pyruvate molecules from glycolysis are used to create ATP, energy, and more.

Enzymes combine the acetyl CoA with oxaloacetic acid to create citric acid. Citric acid then goes through oxidation, becoming oxaloacetic acid once more. Carbon dioxide is created as a byproduct and is exhaled from the cell.

NAD+ and FAD molecules pick up hydrogen and energized electrons from pyruvates, turning them into NADH and FADH2. Each glucose molecule creates six NADHs and two FADH2s.

With all of these preparations made, it’s time for the next phase. 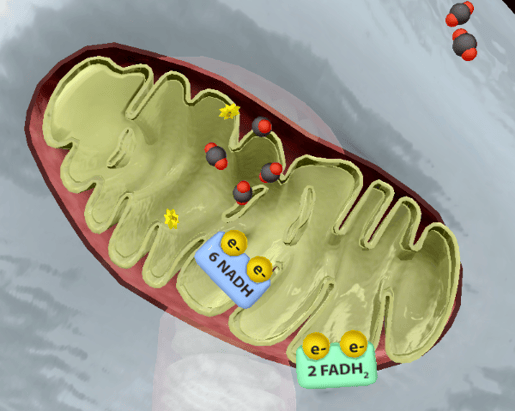 The end result of two rounds of the Citric Acid Cycle. Image from Visible Biology.

Within the inner membrane of the mitochondrion, proteins remove electrons from NADH and FADH2 molecules and pass them along the electron transport chain, extracting energy at each step.

Learn about diffusion and the electron transport chain with this lesson from our Visible Biology YouTube series with Dr. Cindy Harley.

Like a water wheel, the movement of the protons generates energy, and that energy combines ADP with phosphates. This creates ATP—and a lot of it. This final step of cellular respiration produces about 34 molecules of ATP.

If you want to learn more about cellular respiration, check out this nifty blog post that walks you through the steps in further detail.

ATP stores and transfers energy in cells, so when the mitochondria cannot produce sufficient ATP during oxidative phosphorylation, the body’s tissues don’t function as they should. 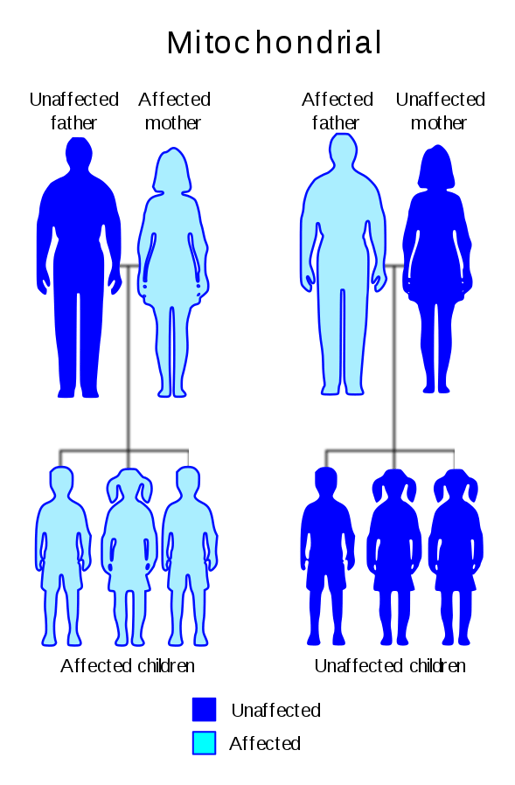 Image by the National Institutes of Health, taken from Wikipedia Commons.

Some examples of mitochondrial disorders include:

Broadly speaking, mitochondrial disorders are a challenge to diagnose. Many symptoms and features overlap with other diseases, and they can present themselves at many different ages. Doctors need to examine muscle biopsies and biochemical markers in order to diagnose someone with a mitochondrial disorder. Often, those biomarkers are not specific and sensitive enough to confirm diagnosis.

Mitochondria are made up of an outer membrane, an inner membrane, and a gooey matrix inside. They get their nickname “the powerhouse of the cell” because they are home to most of the cellular respiration process, which produces ATP for the cell. If a person’s mitochondria do not function properly, this results in an inability to perform cellular functions.