In Part 1 of our Energy & Metabolism overview, we talked about the different types of nutrients your body needs and how it breaks them down into chemical components your body can use. Now it’s time to talk about how the body uses glucose to create one of the most important molecules in biology: ATP.

If you were following the arcade metaphor from the previous post, now it’s time for the good part. You’ve broken down that $20 (a polysaccharide) into a bunch of $1 bills (glucose) and you’re ready to get yourself some shiny gold tokens so you can play games!

As much as it might seem so, glucose isn’t energy per se. The energy in glucose is transferred to a molecule called ATP (adenosine triphosphate). ATP is the real deal when it comes to powering your cells’ functions—it’s the arcade token you need to play skee-ball or Tetris or Pacman. When ATP is broken down into ADP, stored-up energy is released.

In your body, ATP is involved in muscle contraction, the transmission of nerve impulses, transporting ions and molecules across cell membranes, and a host of anabolic reactions such as the assembly of proteins and lipids. You even need ATP to make more ATP.

So how do you make ATP? Cellular respiration. It goes a little something like this:

Basically, what this chemical formula says is that in order to produce ATP, you need a molecule of glucose and some oxygen. When you use those to make ATP, carbon dioxide and water will also be produced. Sound familiar? That’s probably because our bodies take in oxygen, our cells use it for respiration, and we breathe out carbon dioxide!

The transition from glucose to ATP doesn’t take place all at once, though. Cellular respiration is made up of four sub-processes: glycolysis, the citric acid cycle (Krebs Cycle), and oxidative phosphorylation. Let’s talk about each one in detail.

Glycolysis: The Foundation of Cellular Respiration

Glycolysis, the first step of cellular respiration, occurs in the cytoplasm of your cells. During this process, a glucose molecule is broken down into two molecules of pyruvate (pyruvic acid). This process requires the investment of 2 ATP molecules and yields 4 ATP in addition to the pyruvate and another type of molecule called NADH, which will contribute to the final step of cellular respiration.

*Remember: even though glycolysis produces 4 ATP, you have to pay 2 ATP to get it started, so there’s actually only a net gain of 2 ATP.

Here's the very beginning of the process, with the 2 ATP and 1 C6H12O6 to get glycolysis started in the cell's cytoplasm. 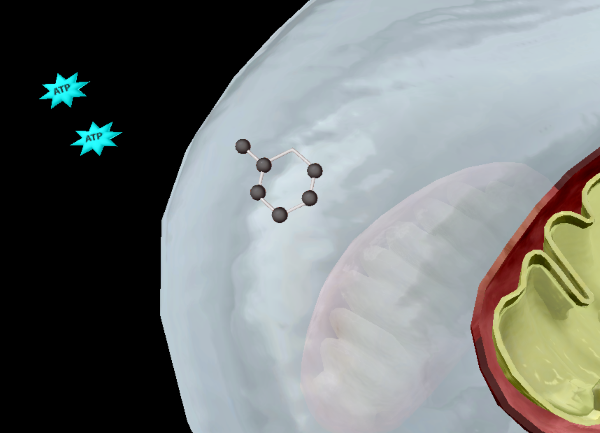 The beginning of glycolysis, the first step in aerobic cellular respiration. Image from Visible Biology.

In the image below, you can see the outputs of glycolysis. 4 ATP are generated (two of which will fuel another round of glycolysis), and 2 molecules of pyruvate (C3H4O3) and 2 NADH are ready to move to the next stage of aerobic cellular respiration. 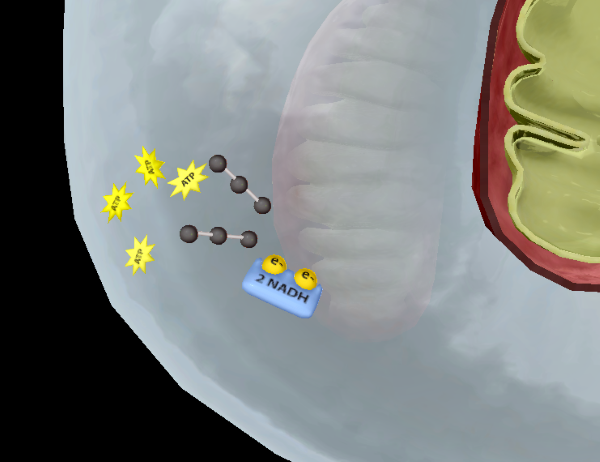 The end results of glycolysis, the first step in aerobic cellular respiration. Image from Visible Biology.

It’s worth mentioning that glycolysis is the first step in both aerobic and anaerobic cellular respiration. Cellular respiration can proceed in the absence of oxygen, but it looks pretty different after glycolysis. If oxygen isn’t present, some organisms, like many gut bacteria, can undergo anaerobic (without oxygen) fermentation. This is the source of much intestinal gas.

Ultimately, the goal of fermentation is to keep glycolysis going (and producing its tiny amount of ATP) by converting NADH back into NAD+. You’re probably familiar with the byproducts of fermentation in several different organisms—for instance, yeast produces the alcohol that gives beer its potency. Bacteria like Lactobacillus, which are used in yogurt and buttermilk, produce lactic acid, giving those dairy products their tangy taste.

Some muscle fibers use anaerobic glycolysis to generate energy, and the end product of that process is lactate. The lactate is carried away by the blood stream and is recycled by the liver. Recent research also suggests that lactate production also occurs in aerobic conditions.

Pyruvate Oxidation: Getting Ready for the Citric Acid Cycle

And now, back to aerobic cellular respiration. After glycolysis and before the citric acid cycle, the two pyruvate molecules lose their carboxyl groups (the carbon molecules that are removed are released as CO2) and combine with coenzyme A to form acetyl-CoA.

Acetyl-CoA is the starting ingredient for the Citric Acid Cycle, which is carried out inside a cell’s mitochondria (the famed “powerhouse of the cell”). 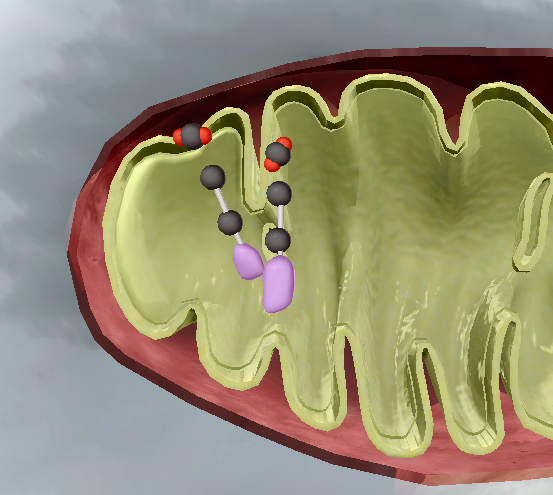 Carbon dioxide being released, and 2 acetyl-CoA molecules ready to begin the citric acid cycle inside a mitochondrion. Image from Visible Biology.

The Citric Acid Cycle: Once More, With Feeling

The Citric Acid Cycle gets its name from the fact that in its first step, the acetyl group from one of the acetyl-CoA molecules combines with oxaloacetic acid (C4H4O5) to form citric acid (C6H8O7).

This citric acid molecule then goes through a series of chemical reactions. The energy from these reactions is captured in carrier molecules: NAD+ becomes NADH and FAD becomes FADH2. Two molecules of CO2 are produced as a waste product, and one molecule of ATP is also produced along the way.

At the end of all these reactions, the citric acid has been broken down and we’re left with oxaloacetic acid once more. This is great, because the other acetyl-CoA needs to go through the cycle too. Because of this, we say that there are two “turns” in the Citric Acid Cycle—one for each acetyl-CoA.

The end result of two rounds of the Citric Acid Cycle. Image from Visible Biology.

*The numbers in this chart represent the total of both “turns” of the Citric Acid Cycle.

Oxidative phosphorylation is where most of the ATP actually comes from. It consists of two steps—the electron transport chain and chemiosmosis—which create and use an electrochemical gradient to produce ATP from ADP. 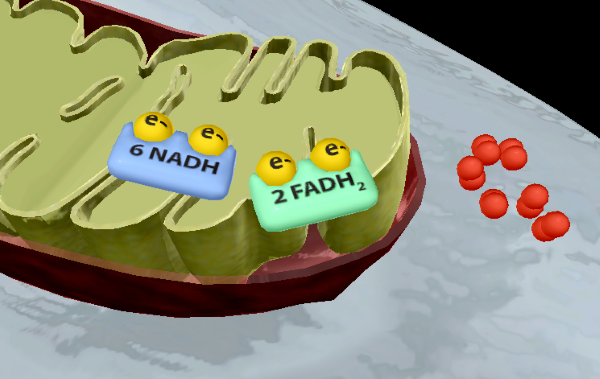 The electron transport chain about to start churning out ATP. Image from Visible Biology.

High-energy electrons from FADH2 and NADH are used to pump hydrogen ions (H+) across the inner membrane of the mitochondrion, into the outer compartment. This creates an imbalance: there’s a whole bunch of positively charged ions on one side of the membrane and they want to cross back over it to restore equilibrium.

The hydrogen ions travel back across the membrane through a protein called ATP synthase. The passage of the ions through it “powers” the ATP synthase, allowing it to turn an ADP (adenosine diphosphate) molecule into an ATP (adenosine triphosphate) molecule by adding a third phosphate group to it. Keep in mind that when a molecule of ATP is “spent” later, this third phosphate group is removed, releasing energy and changing the ATP back into ADP.

Learn about diffusion and the electron transport chain with this lesson from our Visible Biology YouTube series with Dr. Cindy Harley.

It’s during this last phase of cellular respiration that we see the important role oxygen plays. Oxygen serves as the final acceptor for “spent” electrons, combining them with H+ to form our BFF H2O.

The exact number of ATP molecules that are generated by the ETC varies from cell to cell. A good estimate is about 2-3 ATP per NADH and 1.5 ATP per FADH2. A very efficient cell can produce a total of 38 ATP from a single glucose molecule. If we consider that glycolysis and the Krebs Cycle generate a total of 4 of those ATPs, that means that the ETC can produce 34 ATP molecules in one go. 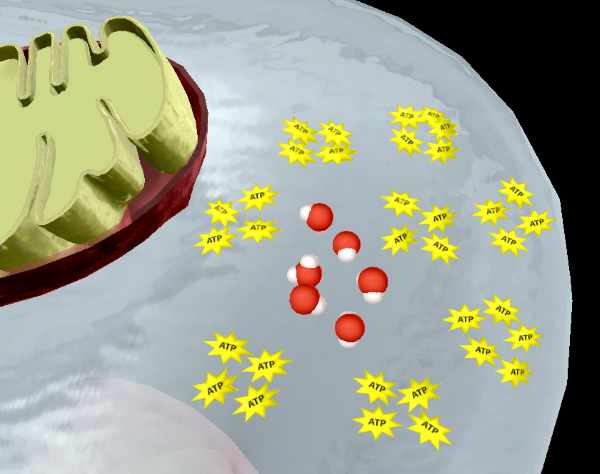 The end result of the ETC and oxidative phosphorylation: water molecules and a whole bunch of ATP! Image from Visible Biology.

Aerobic cellular respiration certainly has its benefits—if glycolysis was our only way of producing ATP, we definitely wouldn’t have enough to carry out all our body’s basic functions!