It’s almost Thanksgiving here in the US. While our family gatherings and friendsgiving celebrations may be virtual this year, there’s still a lot to be thankful for—like the human nervous system! First of all, it runs our body in the background so we don’t have to think about things like breathing or adjusting our heart rate. It also protects us from hurting ourselves while cooking, lets us enjoy the experience of eating turkey and pumpkin pie, and helps us rest after a long day of holiday festivities.

So, without further ado, here are five reasons we’re grateful for the nervous system, especially when preparing and enjoying a Thanksgiving feast!

1. The autonomic nervous system saves us a lot of time and effort.

Let’s start with one of my personal favorite things about the nervous system: the fact that it regulates my breathing, heart rate, and digestion so I don’t have to think about them. (Seriously, it would be really annoying to have to consciously control those things!)

The division of the nervous system responsible for keeping the body’s core functions running is the ANS, or autonomic nervous system. When it comes to regulation, the medulla oblongata is a champ. It’s part of the brain stem and serves as the main control center in the brain for respiratory rate and depth, as well as visceral reflexes like heart muscle contraction and blood vessel dilation.

So when your breathing rate increases to keep your muscles supplied with oxygen during a (virtual) Turkey Trot run, or when you’re digesting your mashed potatoes, be sure to send a little thanks to your autonomic nervous system!

2. Reflexes keep us from hurting ourselves while we prepare a Thanksgiving feast.

Picture this: you’re reaching into the oven to grab a pan of delicious stuffing and your arm accidentally brushes the side of the oven. Before you can think about it, you’ve yanked your arm back. You may have a tiny burn, but you’ve avoided a trip to the ER.

What you’ve just experienced is the result of a somatic reflex arc—specifically, a withdrawal reflex. The coolest thing about somatic reflex arcs like this one is that they don’t even need the brain’s approval to move your body out of harm’s way. The nervous system uses sensory neurons to send signals from the body to the spinal cord, and motor neurons to send commands from the spinal cord to the muscles. The sensory and motor neurons involved in a somatic reflex arc are connected to one another by a neuron called an interneuron. 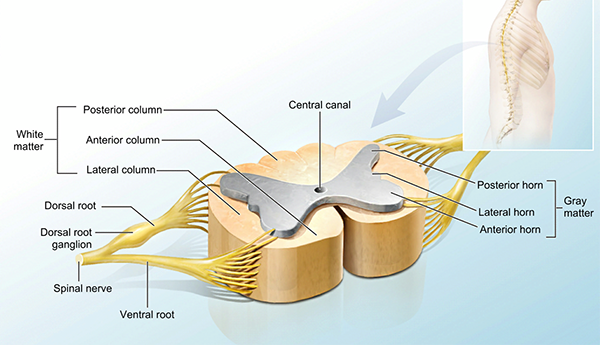 A cross-section of the spinal cord. Image from Anatomy & Physiology.

In the case of your hand or arm touching a hot stove, a sensory receptor in your skin detects a stimulus, such as heat or pain, and converts it to an electrical signal, which a sensory neuron (an afferent neuron) carries to your spinal cord via the dorsal root. Then, an interneuron in the grey matter of the spinal cord relays the signal from the sensory neuron to a motor neuron (an efferent neuron) via the ventral root. Finally, the motor neuron sends an instruction for particular muscles to contract. The contraction of those muscles is what causes you to pull your hand or arm away.

3. Olfaction lets us smell what's cooking and brings back good memories of past holidays.

On a holiday when food is so central, olfaction and gustation—the senses of smell and taste—help us celebrate!

Check out our YouTube channel for more awesome A&P videos!

The primary olfactory cortex (a region of the temporal lobe of the brain) and structures in the limbic system process the signals from the olfactory nerve. One of these limbic system structures, the hippocampus, plays an important role in memory formation. This is why there is such a strong link between the sense of smell and our memories! 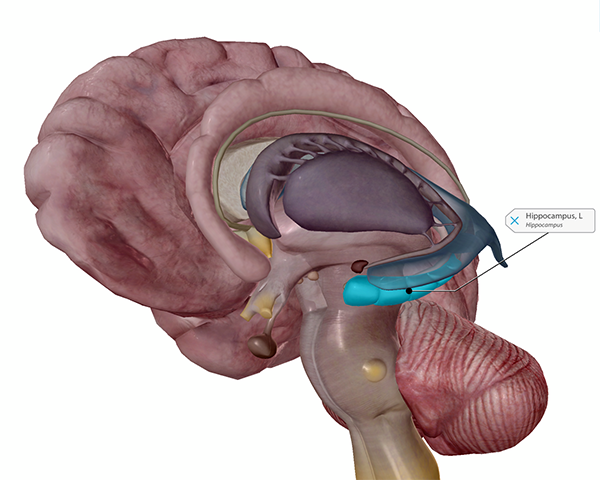 4. Gustation helps us experience the joy of a delicious dinner.

Gustation is similar to olfaction in that it involves chemicals (tastants) that bind to receptors. These receptors are located in the tastebuds, which can be found in or on the papillae—the little bumps on the surface of the tongue. The receptors send electrical signals along the vagus, glossopharyngeal, and facial nerves to the medulla oblongata. From there, the signals are relayed to the thalamus and the cerebral cortex, where the processing of taste takes place. 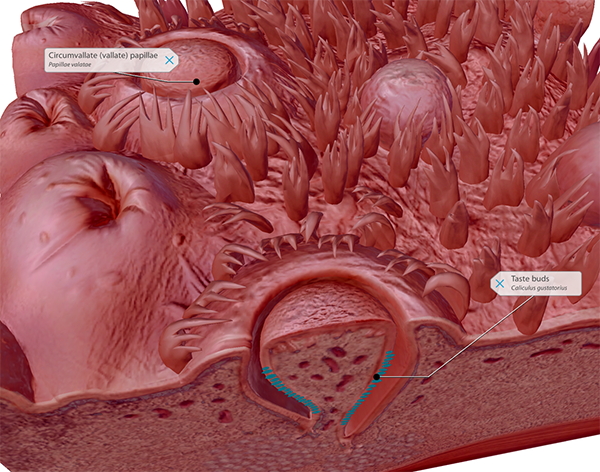 The papillae and tastebuds on the tongue. Image from Human Anatomy Atlas.

Taste receptors on the human tongue can detect five main types of tastes: salty, sweet, umami (savory), bitter, and sour. Why isn’t spicy on that list? The sense we get that something is spicy results from the activation of pain receptors, not taste receptors, in our mouths!

Think about the last time you had a stuffy nose—did you feel like you couldn’t taste your food normally? It turns out that when we taste something, our sense of smell is usually involved, too! Our nasal and oral cavities are connected by the nasopharynx, as you can see in the image below. 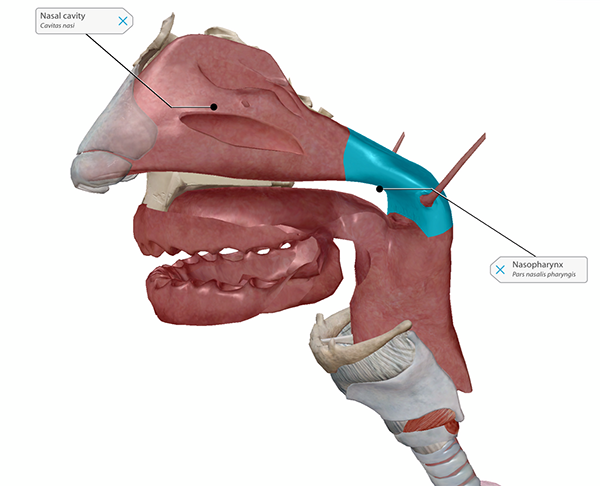 The nasopharynx connects the oral and nasal cavities. Image from Human Anatomy Atlas.

Fully tasting food involves detecting both tastants and odorants, and it is often the combination of these that gives foods their specific, recognizable flavors.

5. Our brains can go into rest mode while we digest our turkey and pumpkin pie.

If you’re like me, then nothing makes you happier than napping on the couch after Thanksgiving dinner. But while sleep is one of life’s simple pleasures, it’s anything but simple on a biological level. Multiple regions of the brain are involved in regulating sleep-wake cycles, keeping our body from moving around while we sleep, and blocking sensory input from the outside world. What’s more, different types and stages of sleep have different patterns of neural activity.

A good night’s sleep is made up of multiple cycles of REM (rapid eye movement, not the band) sleep and non-REM sleep. There are three stages of non-REM sleep.

Stage 1 lasts for around the first 10 minutes after you fall asleep. During this stage, the body transitions from being awake to being asleep, leading to muscle relaxation and a slow-down of eye movement, breathing, and heart rate. The brain stem and hypothalamus communicate to facilitate this process. In stage 2, which lasts between 30–60 minutes, the muscles continue to relax and eye movement stops. Stage 3 non-REM sleep is what we think of as “deep sleep.” During this stage, your heart rate and breathing are at their slowest and your muscles are at their most relaxed. This stage typically lasts between 20–40 minutes. 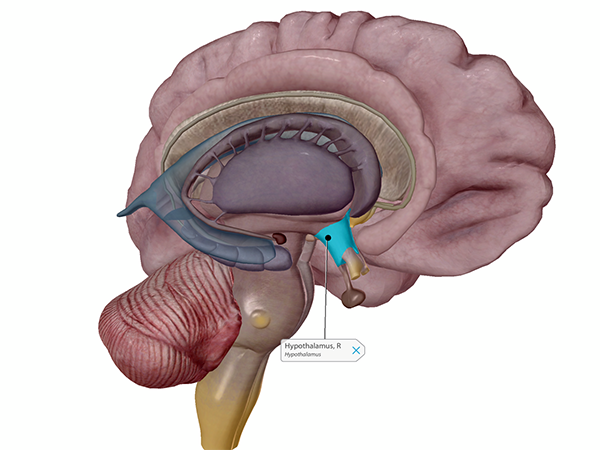 The hypothalamus is central to the function of the endocrine system. Image from Human Anatomy Atlas.

REM sleep is (usually) when you dream! It occurs around 90 minutes after you fall asleep, and gets its name from the way your eyes move back and forth rapidly beneath your eyelids. Breathing, heart rate, and brain activity are all elevated to near waking levels during REM sleep. 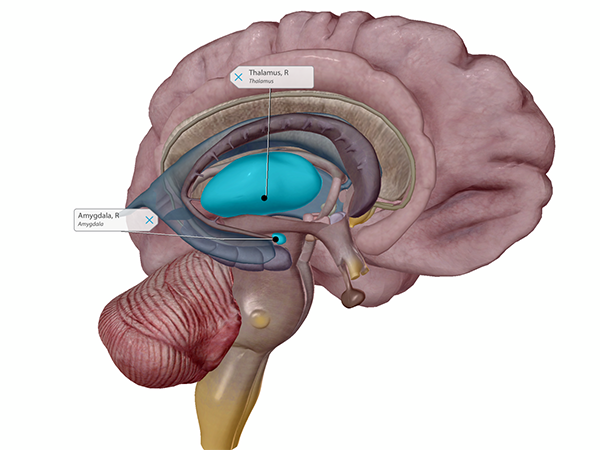 The thalamus and amygdala. Image from Human Anatomy Atlas. 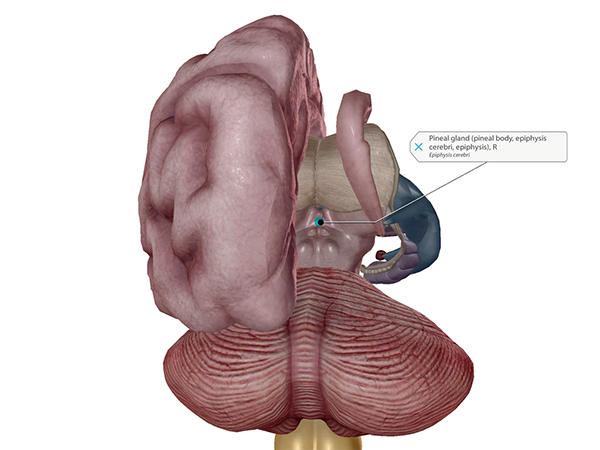 The take-home message here is that your brain works hard to make sure your body gets the rest it needs!

Still awake? Hooray! We hope you’ve found something new about the nervous system to be grateful for. From all of us at Visible Body to you—have a safe and happy Thanksgiving!