Rotate the 3D model to see how the urethra runs through the prostate.

5 Facts About the Prostate and Prostate Cancer

The prostate is a gland of the male reproductive system that is located just below the bladder. It contains the ejaculatory ducts and a portion of the urethra, which carries semen out of the body during ejaculation. 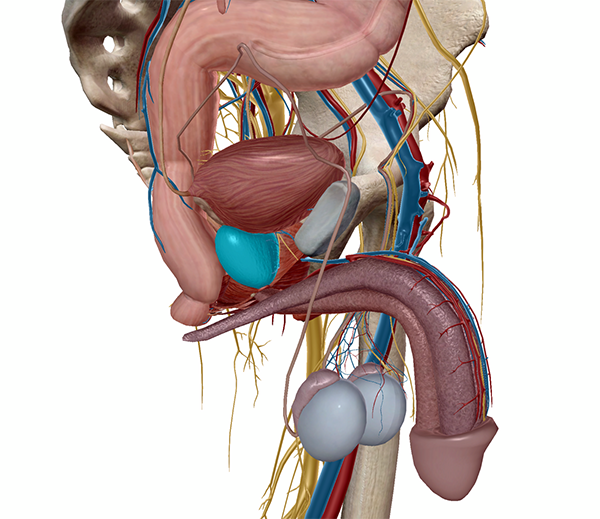 The prostate (highlighted) within the pelvic cavity. Image from Human Anatomy Atlas.

Regular prostate health screenings are an important part of preventative healthcare for men. This is because prostate cancer is one of the most commonly diagnosed cancers in men and, as with many other cancers, early detection and treatment greatly increase the survival rate.

Today, we’re going to discuss five key facts about the prostate’s functions and the conditions that affect it—not just cancer, but also less life-threatening conditions such as prostatitis and benign prostate hyperplasia (BPH).

Sperm have a long journey from where they originate in the testes to the outside world and, potentially, a uterine tube in the female body where they might fertilize an egg.

The cells that result from meiosis in the testes are called spermatids. Spermatids mature into non-motile spermatozoa (sperm) when they are released into the seminiferous tubules.

The process of spermatogenesis. Video from the Visible Body Learn Site.

Sperm are carried to the epididymis by testicular fluid. There, they mature further and become motile before traveling up the vas deferens, to the ejaculatory ducts (which pass through the prostate), and out through the urethra during ejaculation. 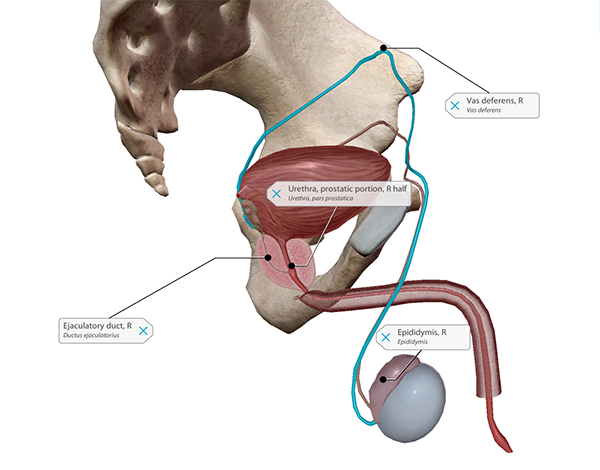 The pathway of sperm, from the epididymis to the prostatic urethra. Image from Human Anatomy Atlas.

Even after they’ve matured in the epididymis, sperm need seminal fluid (semen) to stay alive outside the body. The accessory glands of the male reproductive system—the seminal vesicles, the prostate, and the bulbourethral glands—secrete the substances that make up this fluid, or semen, each making their contribution before ejaculation.

As an accessory gland, the prostate’s role is to secrete a combination of enzymes that activate the sperm and help them move—that is, increase their motility.

2. The prostate contains smooth muscle that pushes the fluid stored in the prostate into the urethra during ejaculation.

In the image below, you can see that a portion of the urethra (the prostatic urethra) runs through the prostate. 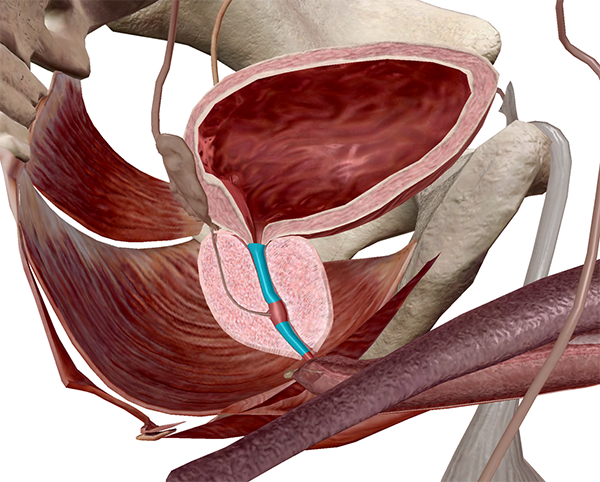 The prostatic urethra (highlighted) and the prostate (L half). Image from Human Anatomy Atlas.

Because the urethra is usually how urine gets from the bladder to the outside world, a couple of things need to happen before semen is expelled through the urethra during ejaculation. The bulbourethral glands, which are located just below the prostate, secrete a clear fluid that neutralizes any acidic urine remaining in the urethra before ejaculation and provides lubrication.

The internal urethral sphincter, located just above the prostate, closes to make sure that no urine is released along with semen during ejaculation.

The glandular cells of the prostate secrete the fluid that gets added to the semen, and the smooth muscle of the prostate contracts to squeeze that fluid into the urethra during ejaculation. Smooth muscle within the prostate also closes off the ejaculatory ducts during urination so no urine can get inside them.

3. An enlarged prostate can cause trouble with urination.

Enlargement of the prostate gland, or benign prostate hyperplasia (BPH), occurs for many men as they get older. Men under 40 usually don’t suffer from BPH, but according to the Mayo Clinic, “about one-third of men experience moderate to severe symptoms by age 60, and about half do so by age 80.”

Because part of the urethra passes through the prostate, BPH commonly leads to symptoms such as increased frequency or urgency of urination, difficulty starting urination, a weak urine stream, and/or the inability to completely empty the bladder. Typically, symptoms become worse over time, and complications such as urinary tract infections, bladder stones, and damage to the kidneys and bladder can occur. 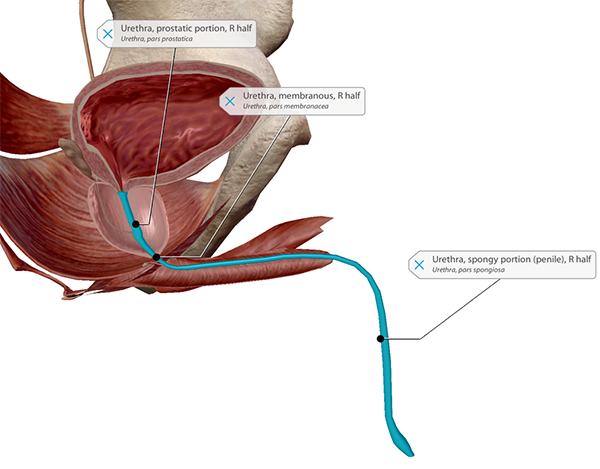 The three portions of the male urethra. Image from Human Anatomy Atlas.

Fortunately, there are many ways of treating BPH, depending on the degree of prostate enlargement that has occurred. Alpha blockers and 5-alpha reductase inhibitors are two categories of drugs that are often used to treat BPH, either separately or in combination. Minimally invasive surgery or surgical therapies are also options that can help shrink the prostate and make urination easier.

4. Prostatitis is the most common prostate problem for men younger than 50.

Like many other -itises, prostatitis involves inflammation—in this case, the inflammation of the prostate gland. Though BPH typically doesn’t affect men younger than 40, prostatitis is often seen in younger men. According to the University of Tennessee Medical Center, nearly half of adult men will receive treatment for prostatitis at some point in their lifetime.

Common symptoms of prostatitis include painful urination, painful ejaculation, increased frequency or urgency of urination, difficulty urinating, cloudy urine, blood in the urine, and pain in the groin, abdomen, perineum, penis, and/or testicles.

If bacteria from the urine leak into the prostate, acute bacterial prostatitis can occur. This might cause flu-like symptoms in addition to those listed above. However, the most common type of prostatitis is chronic prostatitis, or chronic pelvic pain syndrome, which is not caused by bacteria.

5. After skin cancer, prostate cancer is the most common cancer affecting men in the US.

In addition to being common, prostate cancer is also deadly: it is the second leading cause of cancer death in men (lung cancer causes the most cancer deaths). The risk for prostate cancer increases with age, with about 6 in 10 cases of prostate cancer being diagnosed in men 65 and older. Men with close relatives who have developed prostate cancer are more likely to develop it themselves—the American Cancer Society states that “having a father or brother with prostate cancer more than doubles a man’s risk of developing this disease.”

The type of treatment administered depends on how aggressive the cancer is—how fast it’s growing and how far it has spread. Some common treatment methods are radiation therapy, cryotherapy, hormone therapy, chemotherapy, and removal of the prostate gland. The earlier prostate cancer is diagnosed and treated, the better the chances of survival.

September is Prostate Cancer Awareness Month in the US. Want to get involved in fundraising for prostate cancer research and awareness? Check out the Prostate Cancer Foundation.

(September is also Ovarian Cancer Awareness Month! Check out our blog post on the ovaries and ovarian cancer here.)