5 Facts About the Ovaries and Ovarian Cancer

Today, we’re going to talk about the ovaries, the gonads of the female reproductive system and the site of a process with one of the best names ever—oogenesis. 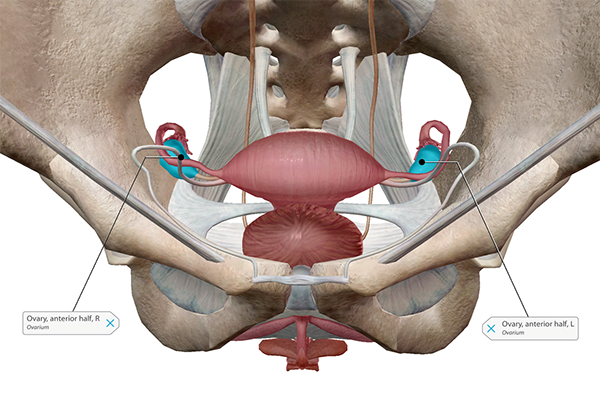 The position of the ovaries within the pelvic cavity. Image from Human Anatomy Atlas.

Oogenesis is the process of egg cell formation, in which a primary oocyte contained within one of an ovary’s thousands of follicles matures into a secondary oocyte. Each month or so, a secondary oocyte (egg cell) is released from a follicle into one of the uterine tubes.

The process of oogenesis. Video footage from Anatomy & Physiology.

The ovaries aren’t just tiny egg factories—they play an important role in hormone production and secretion as well. The ovaries produce and secrete the female sex hormones, estrogen and progesterone, as well as a small amount of androgens (such as testosterone). In addition, the ovaries respond to hormones produced elsewhere in the body. For example, the timing of follicle maturation and ovulation is regulated by FHS (follicle stimulating hormone) and LH (luteinizing hormone), which are secreted by the pituitary gland in the brain. 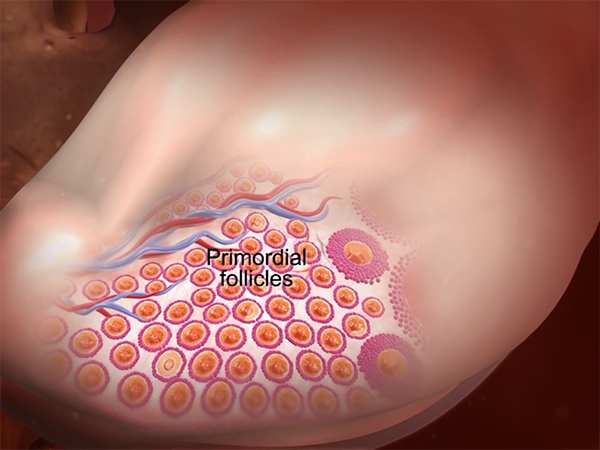 Now that we’ve gone over the basics of what ovaries do, here are five facts about the ovaries and various conditions that can affect them, such as ovarian cysts, PCOS (polycystic ovarian syndrome), and cancer.

1. The ovaries change in volume throughout the lifespan.

The ovaries of someone who is biologically female will contain several million immature eggs at birth. Over time, the number of eggs decreases: some eggs will mature and will be released into the uterine tubes, and others will die before becoming mature. 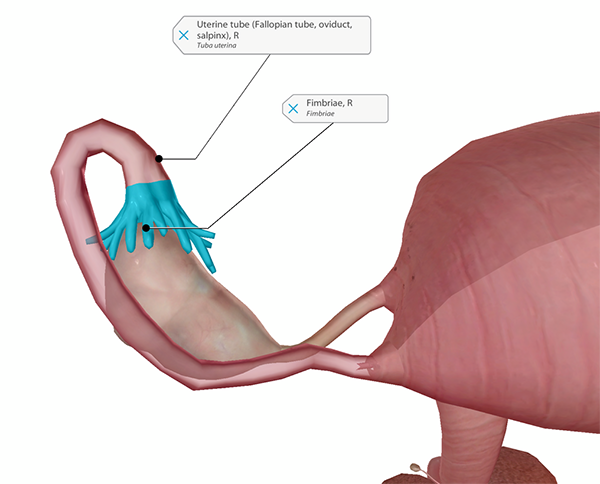 Ovarian volume is lower before puberty. On average, ovarian volume is highest around age 20—this normative model by Kelsey et al., 2013 puts that peak at around 7.7 mL. Ovarian volume decreases slowly after that. At age 50–51 (the average age for women entering menopause) the average volume is 2.8 mL. Interestingly, the model suggests that “69% of the variation in ovarian volume [across the lifespan] is due to age alone.”

Although ovarian volume doesn’t remain consistent throughout the lifespan, abnormal changes in ovarian volume can indicate conditions such as ovarian cancer or polycystic ovary syndrome (PCOS), a hormonal disorder which can cause fluid-filled cysts to form inside the ovaries, enlarging them.

2. Human eggs usually mature and are released one at a time.

Usually, one egg is released during ovulation. If this egg is fertilized by sperm, the resulting ball of cells will embed itself into the uterine wall and begin developing into an embryo. 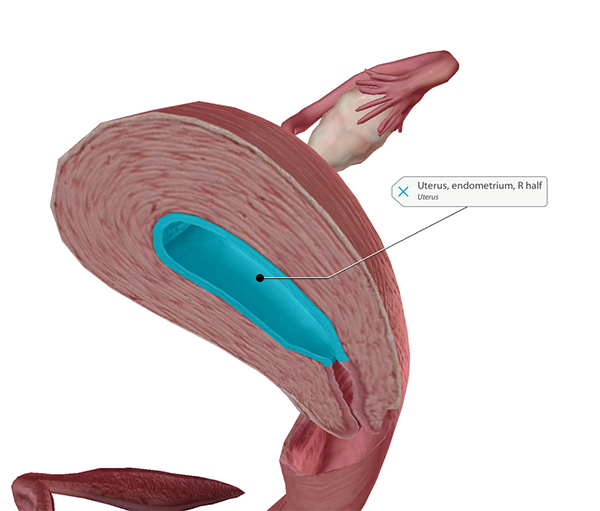 The uterus (right half). Image from Human Anatomy Atlas.

There are a number of factors that might increase the likelihood that more than one egg will be released during ovulation. One is genetics—research suggests that dizygotic twinning runs in families. However, it has been difficult to conclusively establish which gene or genes are responsible for hyperovulation (releasing multiple eggs).

Increased maternal age is another factor that can increase the likelihood of having fraternal twins—women over 35 tend to have twins more often than younger mothers. Mothers who have already had children are also more likely to have twins.

Interestingly, fertility treatments such as in-vitro fertilization (IVF) and in-utero insemination (IUI) can also make twins more likely. In IUI, sperm are placed directly into the uterus. Ovulation-stimulating drugs are often a part of procedures like IUI, and these increase the chance of producing and releasing more than one egg in a single ovulation cycle. In IVF, eggs are removed from a woman’s ovaries and fertilized. The resulting embryos can be stored or transferred to the woman’s uterus or the uterus of a surrogate. Because multiple embryos can be transferred to the uterus, the likelihood of multiple births increases with IVF treatment.

3. The ovaries are not directly attached to the uterine tube. 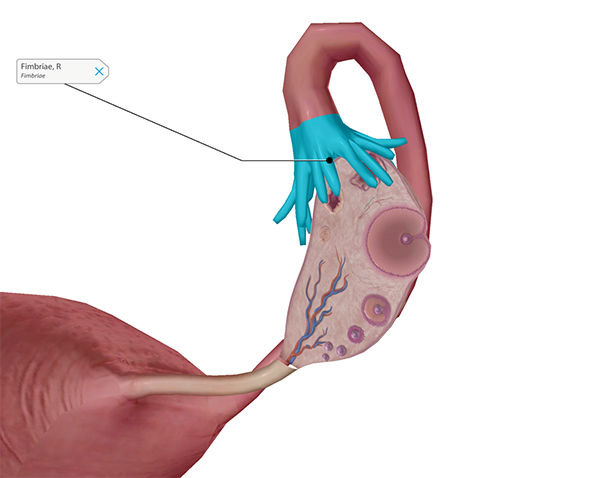 Just before the release of an egg from one of the ovaries (ovulation), the fimbriae swell and move closer to the surface of the follicle. This is so that the released egg can be carried into the uterine tube by the current created by the movement of tiny, hair-like structures called cilia on the outside of the fimbriae.

4. Ovarian cysts are more common than you might think.

According to womenshealth.gov, around 8% of premenopausal women develop large ovarian cysts that need treatment. However, simple ovarian cysts are much more common than that. Many women who ovulate develop benign, or non-cancerous, cysts. Much of the time, unless a cyst causes problems or unless multiple cysts develop, people are not aware that they even have one.

What is an ovarian cyst? An ovarian cyst is a fluid-filled sac in the ovary. There are a number of different types of ovarian cysts. Fortunately, most of them are benign. Functional ovarian cysts, such as follicle or corpus luteum cysts, develop during the course of the menstrual cycle and usually go away on their own after a few weeks. Follicle cysts occur when a follicle doesn’t break open and release an egg during ovulation, and corpus luteum cysts occur if an empty follicle sac doesn’t shrink after an egg is released. Some other types of benign ovarian cysts can result from conditions such as endometriosis and PCOS.

If an ovarian cyst does cause symptoms, they usually include "pressure, bloating, swelling, or pain in the lower abdomen on the side of the cyst." Sudden, severe pain can occur if a cyst ruptures, and nausea and vomiting may occur in addition to pain if a cyst causes an ovary to twist.

Ovarian cysts are more likely to be malignant, or cancerous, in postmenopausal women. However, even though not all ovarian cysts are cancerous, it’s still important to see a doctor if you are experiencing symptoms. Doctors use several methods to diagnose ovarian cysts and plan the appropriate treatment. They can conduct a pelvic exam to feel for swelling of the ovary, and they can use ultrasound to determine a cyst’s shape, size, location, and mass (whether it’s fluid-filled). Hormone level tests can be used to figure out whether the cyst’s cause is hormone-related. Blood tests can be helpful in figuring out whether the cysts might indicate cancer.

5. Around 21,000 women are diagnosed with ovarian cancer every year in the US.

Although there is not a standard screening procedure for ovarian cancer, diagnostic tests can be used to further investigate symptoms, so it’s a good idea to let a doctor know if anything unusual is occurring.

The CDC lists the following as symptoms of ovarian cancer:

It’s important to keep the risk factors for ovarian cancer in mind. Ovarian cancer is more commonly seen in older women, with about 90% of cases occurring in women over 40, but everyone with ovaries should be familiar with what’s normal for their body and report any changes to their doctor.

As with most cancers, early detection and treatment are crucial. Ovarian cancer is generally treated with chemotherapy and surgical removal of cancerous tissue.