As is the case in A&P, keeping track of terminology can be one of the most challenging parts of a biology course, especially when you’re studying cells. There are a lot of words that sound alike, and the structures they apply to may even have similar functions.

In this blog post, we’ll be going over two particularly similar-sounding cellular structures: the centrosome and centrioles. To help you distinguish between them, we’ll talk about the etymology (word history) behind each term, as well as the function of each structure.

The word centrosome comes from the Latin centrum, meaning “center,” and the Greek sōma, meaning “body.” 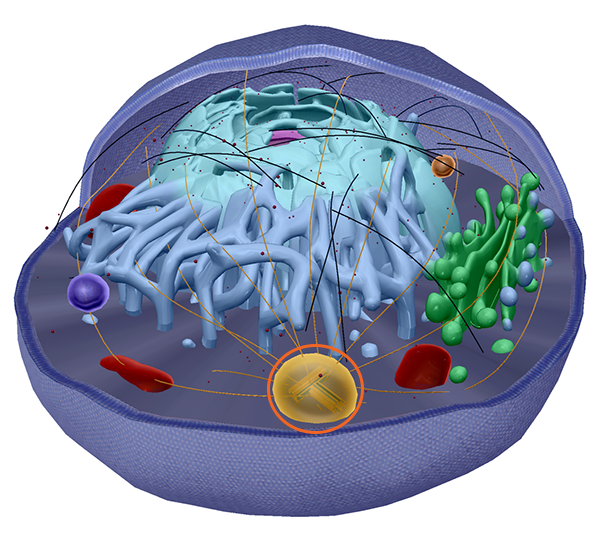 The centrosome, circled in orange, contains the centrioles (the pair of structures you can see inside) and pericentriolar material (the yellow “cloud” around the centrioles). Image from Anatomy & Physiology.

Within the cell, a centrosome is a structure that organizes microtubules during cell division. Each centrosome contains “paired barrel-shaped organelles” called centrioles and a “cloud” of proteins referred to as the pericentriolar material, or PCM.

Centrosomes are often referred to as microtubule organizing centers, or MTOCs. Microtubules are cylindrical structures, about 25 nanometers (nm) in diameter, composed of proteins called tubulins. In eukaryotic cells, they form the cytoskeleton, which helps support the cell and maintain its structure. They also enable movement of other organelles within the cytoplasm.

Prior to mitosis, or cell division, the cell’s centrosome duplicates. During mitosis, one centrosome moves to each end of the cell and microtubules stretch between them, forming the mitotic spindle, which helps to pull the assembled chromosome halves apart and move them into two daughter cells.

The image above shows two types of microtubules: the yellow ones make up the mitotic spindle and the black ones are part of the cytoskeleton.

The word centriole comes from the Latin centriolum, which is a diminutive form of centrum. (If you’re trying to remember that centrioles are within the centrosome, this is useful!) 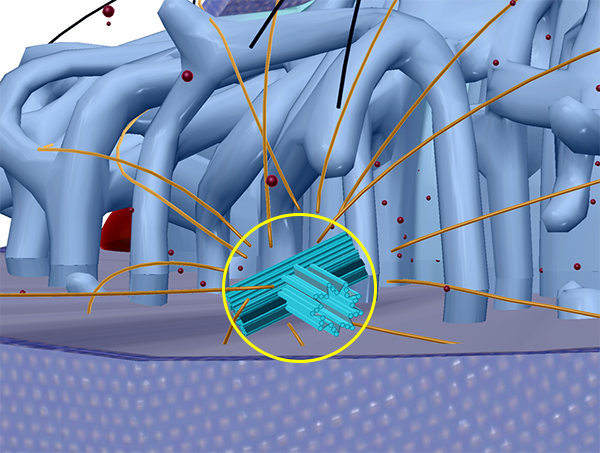 Here is a zoomed-in image of the centrioles from Anatomy & Physiology. The PCM that would normally surround them is hidden so you can see how the microtubules that compose them are arranged.

Centrioles are made up of short lengths of microtubules “arranged around a central cavity.” Each centriole is around 500 nm long and 200 nm in diameter. The function of centrioles in animal cells is to organize the PCM to aid in microtubule formation.

During mitosis, there are two sets of centrioles—one at each end of the dividing cell—just as there are two centrosomes. When microtubules form a mitotic spindle, one end is attached to either a centriole or an astral microtubule.

Note: mitosis in animal cells can occur without centrioles, but this can sometimes result in abnormalities. Higher plant cells don’t contain centrioles, but can carry out mitosis just fine. Thus, centrioles appear to play a role in mitosis, but they aren’t necessary in all cases.

Also, remember not to confuse either of these with the centromere (the region of a chromosome that divides it into a short p arm and a long q arm). The word centromere shares the same Latin root (centrum) but it’s Greek component, mere, refers to a part—so, centromere literally means the “center part” of the chromosome. 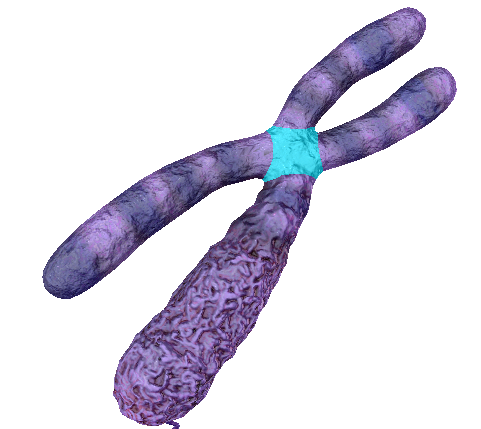 The centromere (highlighted) of a chromosome. Screenshot from Visible Biology (beta).