A Visual Guide to Muscle Terminology with Muscles & Kinesiology

When you’re studying the muscular system, there’s a lot of terminology to learn beyond the names of the muscles themselves. Part of becoming familiar with the body’s muscles is learning how to describe the locations where they attach to bones, the different kinds of muscle actions that move the body, and what roles muscles play in different movements.

Today, we’re going to explore the basics of this terminology using the newest version of our musculoskeletal app for iOS—Muscles & Kinesiology!

What are origins and insertions?

The majority of skeletal muscles wouldn’t be very useful to us if they weren’t attached to bones—we are able to move our bodies precisely because the muscular and skeletal systems are literally linked to one another.

When skeletal muscles receive electrical signals from the nervous system, they contract, and the force generated by that contraction moves bones relative to the joints that connect them. Essentially, bones act as levers and synovial joints act as fulcrums. The force it takes to move the lever is applied by the contraction of a muscle or series of muscles working together.

The origin (red pin) and insertion (blue pin) of the long head of the biceps brachii. Image from Muscles & Kinesiology.

Muscles & Kinesiology makes it easy to visualize origins and insertions using pins and bone paint. This is a great tool for people like me, who use colors to memorize everything!

The Muscle Index and search bar in Muscles & Kinesiology.

Once you’ve got the 3D model on the screen, tap or click the latissimus dorsi to highlight it. In the info box, you’ll see a red pin icon—tap it and you’ll be taken to the pins and paint view, where you can explore the origins and insertions of the latissimus dorsi by tapping the red and blue pins you see on the model. You can also move through them quickly by tapping the arrow icons on the pin label, as I do in the video below. The attachments of the latissimus dorsi. Video footage from Muscles & Kinesiology.

What are the roles muscles play during muscle actions?

In any muscle action, there are several key players. The first, and arguably the most important, is the role of agonist, or prime mover. An agonist is a muscle that does the bulk of the work during a muscle action. There can be multiple agonists working together, as well. For an example, think back to the biceps brachii. It’s a prime mover in elbow flexion, along with the brachialis and brachioradialis.

In literature, an antagonist works against the hero and stands in the way of their goals. A muscle working as an antagonist does something similar: it works in opposition to the action of the agonist. In fact, it’s usually a prime mover of the opposite action in a pair like flexion and extension (more on those later). Why is it important to have an antagonist? They help maintain the position of the body or limb during muscle actions, and they also keep muscle movements controlled.

In the elbow example, the triceps brachii would be the antagonist for elbow flexion, but it’s the agonist for the opposing action, elbow extension. The hamstrings and quadriceps femoris muscle groups have a similar agonist/antagonist relationship for the flexion and extension of the knee joint.

Now, sometimes agonists need a little help. This is where synergists and stabilizers come in. Synergists provide direct assistance to the agonists. For example, the pronator teres is a synergist in elbow flexion. Stabilizers help the agonist by stabilizing the bone that the prime mover’s origin attaches to (that is, the bone that’s not being moved). 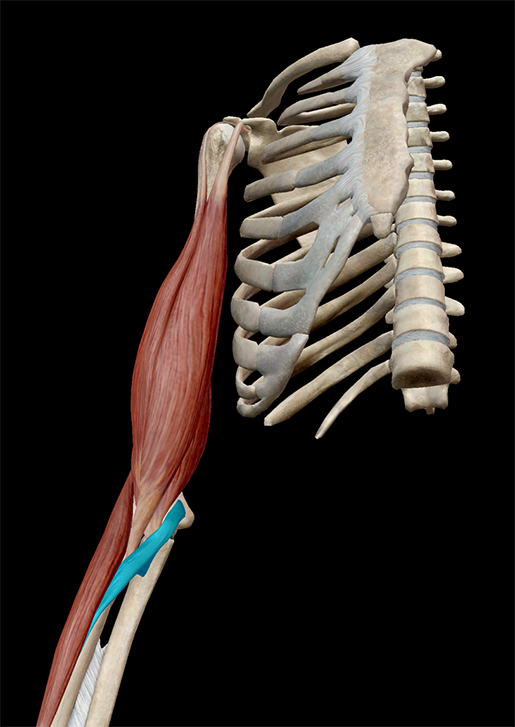 The pronator teres acts as a synergist in elbow flexion. Image from Muscles & Kinesiology.

To see which actions a particular muscle is involved in, select that muscle and read the definition of that muscle in the info box.

You can also select a muscle action and check the info box to see which muscles act as prime movers and synergists in that action. Then you can select individual muscles to find out more about them. 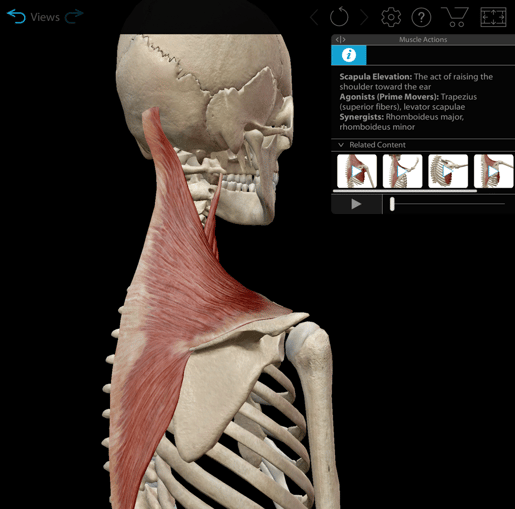 The info box for scapula elevation in Muscles & Kinesiology.

What are the different types of muscle actions?

Although we’ve started by talking about flexion and extension, there’s a lot more to muscle actions than just those two! Let’s take a look at the different types of paired muscle actions you can explore in Muscles & Kinesiology.

ADduction is movement towards the midline of the body (ad is another Latin preposition which means “to” or “toward”).

Elevation and depression are what they sound like: moving a part of the body up or down. The most obvious example of these actions is the elevation and depression of the mandible, which closes and opens the mouth, respectively. The scapulae can also be moved in this way—think of a shoulder shrug and you’ve got scapula elevation.

Pressing the shoulder(s) down is scapula depression.

A movement that increases the angle between bones is extension.

Flexion and extension occur at hinge joints like the knee, elbow, and digits; ball-and-socket joints like the shoulder and hip; and gliding joints in the spine. Lateral flexion (right-left direction of movement vs. forward-backward) also occurs in the joints of the spine.

Inversion and eversion, like abduction and adduction, make reference to the midline of the body. Turning the sole of the foot inward (towards the midline) is inversion.

Turning the sole of the foot outward (away from the midline) is eversion. Once again, you can see this in the prefixes—in Latin, the preposition in means “into” or “against,” and e/ex means “from” or “out from.”

The trick to remembering the difference between plantarflexion and dorsiflexion is thinking about which part of the foot is decreasing its angle with respect to the leg.

Dorsiflexion is when the foot moves such that the toes come closer to the shin. That is to say, the angle between the top of the foot (dorsum) and the shin decreases.

Supination would be a rotation of the forearm ending with the palm facing forward or up.

Protraction and retraction are also pretty much what they sound like. They involve moving a part of the body forward (protraction) or backward (retraction). In addition to being moved up and down, the mandible can also be moved forward or backward. When the mandible moves forward, ending in an underbite, that’s mandible protraction.

When the mandible moves backwards, ending in an overbite, that’s mandible retraction.

You can view the full library of muscle action animations by looking at the muscle actions menu. Within the menu, the actions are organized by body region. 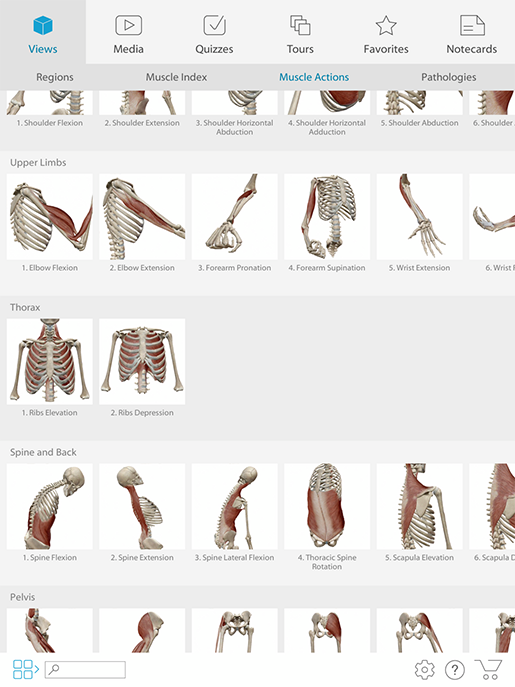 As you’ve seen in the video clips above, the new muscle action animations in Muscles & Kinesiology (as well as the newest version of Human Anatomy Atlas) feature fading as the muscles involved in an action relax. This fading makes it easier to distinguish between paired actions.

Let’s look at scapula elevation and depression as an example. First, we’ll go to the muscle actions menu and look in the shoulder section. We’ll select scapula elevation, and then watch the animation and take a look at the info box. 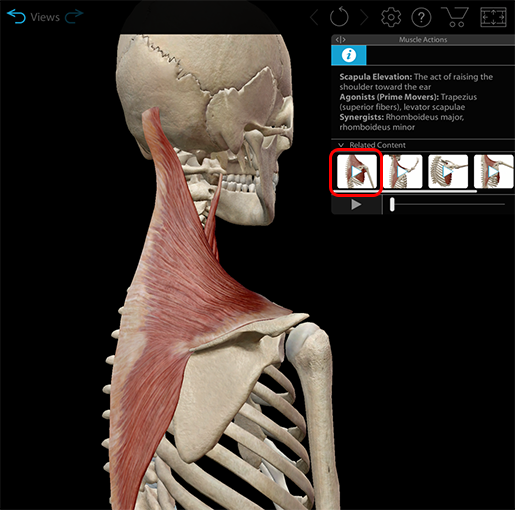 Selecting an animation from the Related Content in Muscles & Kinesiology.

All in all, Muscles & Kinesiology (available now for iOS and coming soon to Android!) gives you the tools you need to study how muscles move, how they interact with one another, and where they attach to the skeleton.

You can also visit the Visible Body Learn Site and check out these related blog posts to learn more about how the muscular, nervous, and skeletal systems interact and what happens when injuries occur: