Mitosis and Meiosis: What's the Difference?

Somatic cells—that is, the cells in your body that aren’t sex cells—do this via a process called mitosis. New sex cells, or gametes, are produced via a different process, called meiosis. Today, we’re going to talk about both of these. How are they different? How are they similar? Keep reading and you’ll find out!

The Cell Cycle and Mitosis: You Are Your Own Clone Army

Just like us multicellular organisms, cells have a cycle of life.

Most of a cell’s time is spent in Interphase, the largest section of the pie-chart-looking graphic above. But there comes a time in most cells’ lives when they’ve got to reproduce. In the S phase, the cell prepares for this by creating copies of all its DNA. (You can read more about replication here.) Then, in G2, the cell continues growing and preparing for mitosis. We’ll save G1 for later.

There are four phases of mitosis: prophase, metaphase, anaphase, and telophase. I’m sure there are lots of mnemonic devices out there for memorizing them, but the one my seventh-grade science teacher taught me is the one I’ve remembered to this day: "Paul Meets Anne Tonight." Feel free to use something more exciting, like “Poisonous Mushrooms Aren’t Tasty.”

Check out this overview of mitosis, featuring the mitosis 3D model in Visible Biology!

During prophase, the DNA that’s floating around in the nucleus of the cell like a blob of tiny spaghetti starts to condense, coiling itself up super tight. Remember that each of your 46 chromosomes (that is, distinct strings of DNA) has a “double” because the cell’s DNA copied itself back in the S phase. Together, each chromosome and its double form a chromosome made up of two sister chromatids joined by a centromere. (This is what we typically picture when we think of a chromosome.)

A few more things also happen during prophase: the nuclear envelope that separates the nucleus from the rest of the cell dissolves, the nucleolus disappears, and structures called centrosomes migrate to each end of the cell. The centrioles within the centrosomes sprout spindle fibers (microtubules) as they go. Some spindle fibers grab onto centrosomes as this is going on.

Chromatin condensing, centrosomes moving to opposite ends of the cell, and spindle fibers grabbing on to sister chromatids. Video footage from Visible Biology.

After that, it’s time for metaphase. During metaphase, the chromosomes line up in the middle of the cell, and the microtubules form a full mitotic spindle across the cell.

In anaphase, the chromosomes in the center of the cell pull apart at their centromeres, and one sister chromatid from each one ends up at each end of the cell.

Telophase is the final phase of mitosis, and this is when the official division of one cell into two happens. First, the chromosomes relax back into chromatin and a nuclear envelope forms around each chromatin blob, making it into a brand new nucleus. A nucleolus appears in each of these new nuclei during telophase as well, and the mitotic spindle, having served its purpose, is disassembled.

Finally, the center of the cell pinches inwards and the two nuclei move away from each other, separating the original parent cell into two daughter cells. Each of these daughter cells is a diploid cell with 46 chromosomes (now with just one chromatid each), just like the parent cell and all the other somatic cells in the human body. They’re also genetically identical to each other—so yes, they’re technically clones, but that’s a good thing for somatic cells.

The daughter cells are now in G1, during which they grow, synthesize proteins, and build organelles. After that, they can either enter G0, the non-replicative phase, or move on to the S phase and get ready to reproduce. They grow up so fast, don’t they?

Meiosis: Half the Chromosomes, Double the Fun

Meiosis is similar to mitosis in many ways, but there are a couple of important differences. First of all, even though meiosis starts with a diploid cell (a primary oocyte or primary spermatocyte), its end products are 4 haploid daughter cells, each with 23 chromosomes. Instead of being clones of the original cell, each of these daughter cells is genetically unique from its parent and its fellow daughter cells.

Check out this overview of meiosis, featuring the meiosis I and II 3D models in Visible Biology!

Meiosis consists of two rounds of division: meiosis I and meiosis II. Each round has a prophase, metaphase, anaphase, and telophase.

Meiosis vs. mitosis. Image from A&P 6.

The homologous pairs of chromosomes find and line up next to each other, and then something amazing happens: recombination. Recombination (aka “crossing over”) is the process that makes prophase I so special. It’s essentially a scrambling-around of genetic material that introduces some variation into the eventual daughter cells. Recombination is one of the hallmarks of sexual reproduction, giving evolution a hand through changing things up on the genetic level.

Let’s look at a single homologous pair as an example of how recombination works.

You’ve got your two chromosomes in the homologous pair—one from mom, and one from dad—and at the start of prophase I, each one of these has two chromatids. Together, the two chromosomes form a tetrad, named so because it has four chromatids total. Within the tetrad, the chromatids of the maternal and paternal chromosomes swap homologous sections of DNA with one another. (I will never forget how my high school biology teacher represented this process with a wacky, arm-waving dance.)

Crossing over in progress. Image from Visible Biology.

Fun fact! In the sex chromosomes of biologically male individuals (XY), crossing over can occur only between certain regions of the X and Y chromosomes. 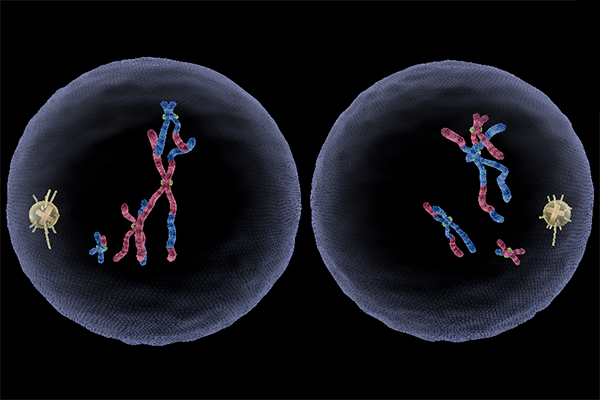 The end result of meiosis I. Image from Visible Biology.

This becomes important because the result of the second half of meiosis is four haploid cells in which each chromosome only has one chromatid.

Then, telophase II results in a total of four haploid daughter cells (two from each of the daughter cells produced in meiosis I), each with 23 single-chromatid chromosomes.

Here’s another fun fact, this time about female gametes. Even though each primary oocyte technically produces three or four daughter cells, only one of them is actually a viable egg. The other two or three are called polar bodies, and they can’t be used in baby-making.

That was a lot of information I just threw at you, so let’s summarize the main differences between mitosis and meiosis in chart form.

And that’s mitosis and meiosis in a nutshell! If you want to learn more about cells, check out these related VB Blog posts:

We've also got a free eBook detailing the different organelles inside human cells!