I can't tell you how many times a day I  drop the side of my face into my hand—it's becoming a problem. Mostly because after a while it gives me a mean crick in my neck. What's cool about it is that one of my favorite muscles is involved in the action: the sternocleidomastoid. Try saying that five times fast.

The sternocleidomastoid (even typing it is a challenge) is a muscle in the neck region, often classified with the lateral cervical muscles. If you put your hands on either side of your neck, a little bit closer to the back, chances are you're touching the sternocleidomastoid, or SCM.

Like the biceps brachii and gastrocnemius, the SCM is a two-headed muscle, which means the muscle begins or originates at two separate points and then converges to insert at one point.

Actions of the Sternocleidomastoid

The SCM's main responsibility is moving the vertebral column and head.

Remember my little problem? Do what I'm doing right now: place your cheek and jaw into your hand so that you're holding the weight of your head. Besides having terrible posture, you're also flexing your neck laterally, or drawing the head to the shoulder of the same side. It's the same action when a dog tilts its head curiously after hearing a new noise (my dog did this all the time as a puppy, and it was unbearably cute).

Have you ever been so sleepy that your eyes slide shut and your head drops toward your chest? Normally that's when you jerk up and say, "I'm awake!" The action of dropping your head is neck flexion.

Rotating your head to one side (contralateral head rotation) also involves the SCM, as does elevating your ribs. When you take a deep breath in, your SCM helps to bring up your thoracic cage and clavicles, creating a larger space for the lungs to expand.

The manubrium is part of the sternum and forms the anterior wall of the thoracic cage; it also serves as the attachment point for several muscles. The clavicles make up the anterior part of the shoulder girdle and connect the bones of the upper limbs to the axial skeleton. 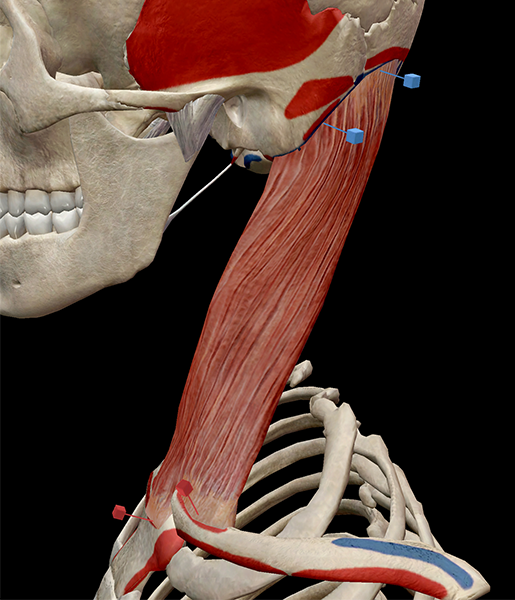 Since the SCM is involved in so many actions, it stands to reason that it would be just as susceptible to injury.

Sternocleidomastoid Syndrome is the name for dysfunction of the SCM; some of its symptoms are similar to those of pharyngitis, so the diagnosis can sometimes be incorrect. In some cases, the SCM  can develop tightness and weakness with the presence of multiple trigger points within both heads. Trigger points are taut bands of muscle fibers and are sensitive to pressure when compressed. Dysfunction of the SCM can result in head and face pain, nausea, dizziness, coryza (producing the nasal symptoms of a cold), and lacrimation (eyes tearing up).

Whiplash is another injury and is very common in car accidents. It occurs when a person's head is thrown backward and then forward, straining the neck's muscles and ligaments. In many cases of whiplash, the longus colli is weakened and the SCM is overworked to compensate for it. Myofascial (muscle/fascia) pain from whiplash can bother the SCM for years if it's not properly treated.

Want to learn about more of the muscles that help move the head and neck? Check out our Neck Muscles eBook!