Explore the Anatomy of Invertebrates with New Models!

To celebrate the new models released in Visible Biology this week, let’s look at invertebrate anatomy. Studying invertebrates is a great way to get students to think critically about function and apply their knowledge, and with Visible Biology, students can conduct virtual dissections with no special equipment or cleanup needed.

Let’s take a look at our two invertebrate friends, the earthworm and the sea star.

Did you know that there are over 1800 species of earthworm? The longest species can grow up to 11 feet long, but L. terrestris, the most common species in the United States, maxes out at about 10 inches.

Earthworms get their nutrients from the bacteria and fungi growing on decaying plants and other organisms. Their presence is indicative of a thriving soil system because they mix soil, increase microbial activity, and improve water quality. Their burrows minimize surface water erosion, and earthworms can increase the soil’s water-holding capacity by increasing soil porosity.

The most exterior part of the earthworm is called the cuticle. The cuticle is a layer of collagen fibers over the worm’s epidermis. Earthworms don’t have lungs or other specialized respiratory organs, so they use their epidermis to breathe using diffusion. You’ve probably noticed that worms are made of several rings or segments. The worm’s interior is also divided into segments by dividing walls called septa. Septa keep fluid from passing into other segments; this fluid distribution helps the worm move. Most segments include nephridia, organs which remove waste from the body. 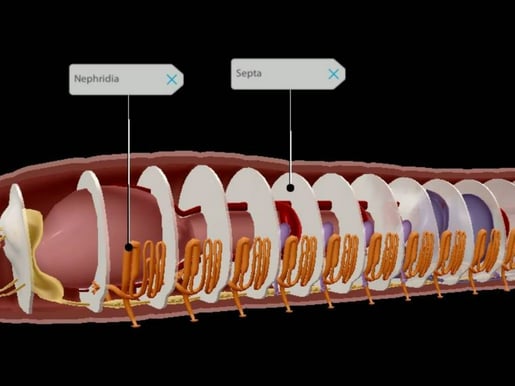 Beneath the epidermis and a layer of connective tissue lies the circular muscle layer, which runs in circles around the worm and contracts to make the worm thinner. The longitudinal layer runs from the anterior to the posterior end, and when it contracts, it makes the worm shorter. These muscle tissues help worms move. Located throughout the epidermis are bristles called setae, which allow the worm to gain traction and to move easily in the soil. 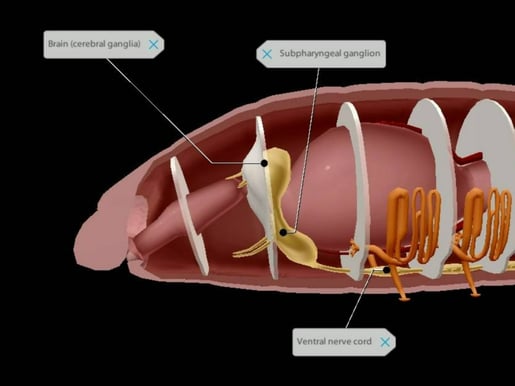 All earthworms produce both sperm and eggs, though an earthworm’s eggs must be fertilized by another earthworm’s sperm. The clitellum secretes mucus to form a capsule that protects the worm’s zygotes. Traveling through the oviducts, eggs pass from the ovaries through the female genital pore, while sperm is stored in seminal receptacles. The resulting zygotes are wrapped in mucus and deposited into the soil. The mucus hardens into a cocoon.

Flashcard made with Visible Biology.

Next, let’s talk about the star of the show: the sea star! Some people may call them “starfish,” but sea stars are not fish; they are related to sea urchins, sea cucumbers, and sand dollars. There are almost 2,000 species of sea stars, and most of them have five arms, though some species can have up to 40. Some species can live for more than 30 years!

Sea stars are carnivorous, chowing down on snails, mussels, clams, oysters, and barnacles. One remarkable thing about sea stars is their ability to regenerate their arms and feet. For larger sea stars, the process of limb regeneration can take up to a year. Some species can regenerate a body from a severed limb.

GIF made with Tours in Visible Biology.

Sea stars belong to the phylum Echinodermata, which means “spiny skin” in Greek. Sea stars’ spines protect them from predators. Their skin gills, located at the base of the spines, are evaginations of the skin and are both respiratory and excretory organs.

The sea star relies on its endoskeleton for structural support. The endoskeleton is made of calcareous structures called ossicles, connected by soft tissue.  Spines project from some ossicles through the epidermis and other ossicles, called plates, provide support. 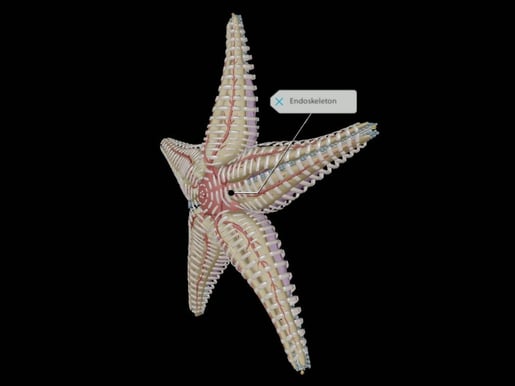 Sea stars do not have blood; they circulate water throughout their body through a network of canals. Respiration occurs through the skin and tube feet. Water enters the body through the madreporite (also known as the sieve plate) on the aboral surface. The madreporite connects to the stone canal, which in turn connects to the ring canal that circles the central disk. The ring canal connects to radial canals that bring water to the arms and branch into lateral canals, which bring water to the tube feet. This system of tubes is mainly for the movement of tube feet but can contribute to respiration. 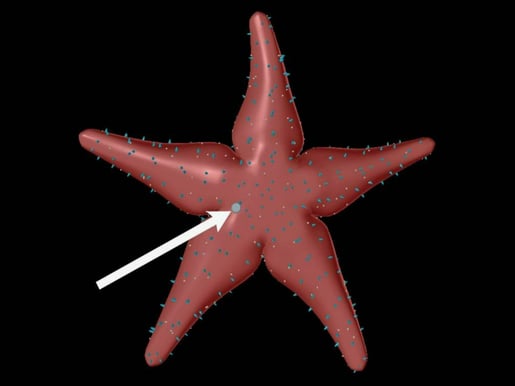 Arrow pointing to the madreporite. Image from Visible Biology.

The tube feet allow the sea star to move, stay in place, take in oxygen, and release nitrogenous waste. They also allow the sea star to receive sensory information. Each foot is made of an internal ampulla and a podium. The ampulla is the water-filled sac that connects to the lateral canal, and the podium is the muscle that protrudes out of the body. 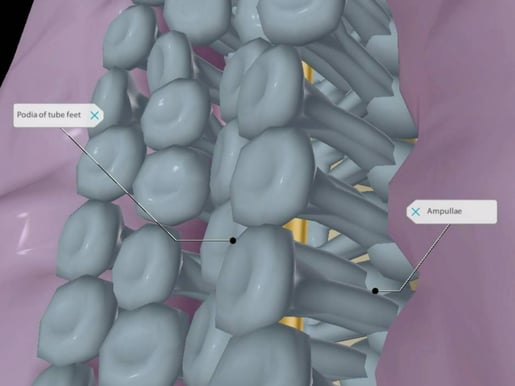 Instead of a brain or a central nervous system, sea stars have a nerve ring that circles the central disk. Radial nerves that run through the arms connect to the nerve ring. At the end of each arm, sea stars have a photosensitive eyespot that detects light intensity, and their senses of touch and smell come through receptors in the epidermis.

The sea star can ingest small particles through its mouth—but that’s not all it can do. Once the tube feet have immobilized or opened the shell of their prey, the sea star can push its cardiac stomach through its mouth into its prey to begin digestion. From the cardiac stomach, food moves into the pyloric stomach inside the body where it is fully digested. Ducts then carry away the waste to the anus, located on the aboral surface. 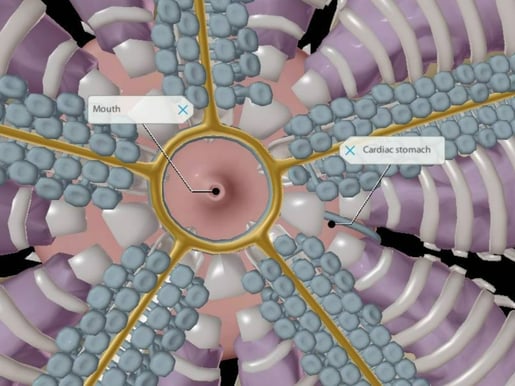 Sea stars reproduce sexually, and a few species can reproduce asexually. Through asexual reproduction, when a sea star has been broken in half, each half can regenerate the missing parts. They can also regenerate from an arm and part of the central disk.

Sea stars’ gonads are located beneath the pyloric caeca in each arm. They release either sperm or eggs into the marine environment. Eggs are fertilized externally and hatch into larvae.

Thanks for coming along with us on this tour of the earthworm and sea star! Check out these blog posts to learn more about teaching and learning with Visible Biology:


Be sure to subscribe to the Visible Body Blog for more awesomeness!