Evolution is the process by which organisms change over the generations, developing from their previous forms, while natural selection is a mechanism behind evolution, in which organisms that are better suited for their environment survive and reproduce more than others.

Fast forward to today, and phrases and terms connected to evolution—like “survival of the fittest”—have seeped into pop culture and conversational use.

Evolution is a scientific term almost everyone recognizes, but that popularity also means there are some common misconceptions about this theory. Today on the Visible Body Blog, we’ll look at six myths about evolution and talk about why they are fiction, not fact.

We’re starting this list with the most common misconception about evolution: that it’s “just” a theory. Scientific terminology and everyday uses of words don’t always line up. In common use, we view theories as being unproven, synonymous with “a hunch.” But in science, that’s simply not true—hypothesis is what you mean.

In the scientific world, a theory is an explanation that encompasses facts we know about the world.

Take, for example, gravitational theory. Newton described the presence of gravity, explaining that gravity is a universal force that acts upon all objects with mass. Hundreds of years later, we’ve found that Newton’s theory of gravitation still describes everyday phenomena—and Einstein’s theory of relativity accounts for everything else. So evolution is “just a theory” as much as gravity or relativity.

A theory holds up under testing, and further research and tests can also refine a theory. For example, the theory of evolution has been supported and refined through the study of genetics, a discipline that simply did not exist when the theory was first crafted.

Saying that evolution is “just a theory” is misleading because it ignores that scientific theories are well-respected, well-researched, strong explanations for phenomena we have observed.

Variations exist within all populations, and evolution does not make traits suddenly appear.

In this example, application of insecticide did not result in the genetic mutation that caused a resistance to insecticide—it’s always been there, but it didn’t come in handy until the insecticide was applied. Individuals with the favorable trait end up surviving and reproducing, passing on those genes. This is the process of natural selection.

Myth #3: Evolution has a goal

Firstly, evolution doesn’t strive to do anything. It doesn’t work towards any goals.

Moreover, there’s no forward direction for evolution: a human is not “more evolved” than a jellyfish. When it comes to evolution, there’s no end goal to aim for, only survival and reproduction, so framing it as a hierarchy is incorrect. 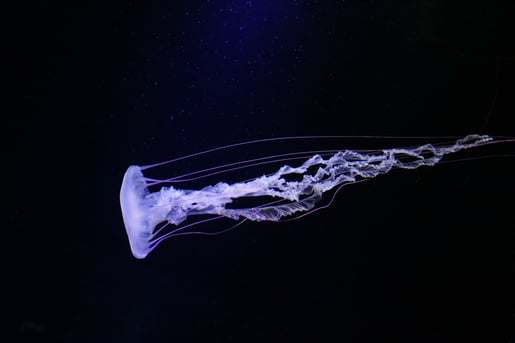 Humans are just "as evolved" as simpler organisms like jellyfish. Photo by Miriam Fischer via Pexels.

Myth #4: Survival of the fittest means that only the strongest survive

“Survival of the fittest” may sound kind of like a Crossfit slogan, but it’s not actually about physical strength.

“Fitness” doesn’t necessarily mean traits that increase strength or speed, but instead the traits that lead an organism to reproduce more.

“Survival of the fittest” makes it sound like survival is the most important element of natural selection—it’s not! Reproduction is. It’s not as relevant to evolution how long an organism lives; it’s more important that they reproduce—a trait that lengthens the lifespan of an organism is less likely to increase in frequency than a trait that leads to more offspring. In evolutionary biology, the term “Darwinian fitness” describes an organism’s success in reproducing, not its lifespan.

Fitness can be influenced by behaviors, too. Though it might be detrimental to the parents’ health, animals who care for their young are more likely to have those young survive and go on to have more progeny.

Natural selection for traits that affect mate choice reproduction is called sexual selection. One classic example of sexual selection is evident in peacocks. Does having beautiful plumage help male peacocks survive? Nope! But it does help them attract mates and pass on those traits. 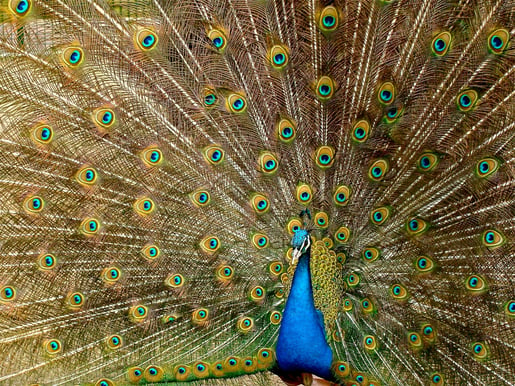 Photo by Pixabay via Pexels.

“Survival of the fittest” doesn’t mean that only the physically strong survive, as natural selection selects for many different traits, which together increase the likelihood of successful reproduction.

Like many of these myths, this is a misconception because the statement is framed incorrectly. For one, humans are apes. Humans are members of the family Hominidae, which also includes orangutans, gorillas, chimpanzees, and bonobos.

Humans did not evolve from other modern apes; we all evolved from a common ancestor.

Let’s look at a common depiction of evolution that might have contributed to this misunderstanding of evolution. “The March of Progress” by illustrator Rudolph Zallinger was published in the 1965 book Early Man. This illustration has been adapted and parodied so much that you’re sure to recognize it instantly. 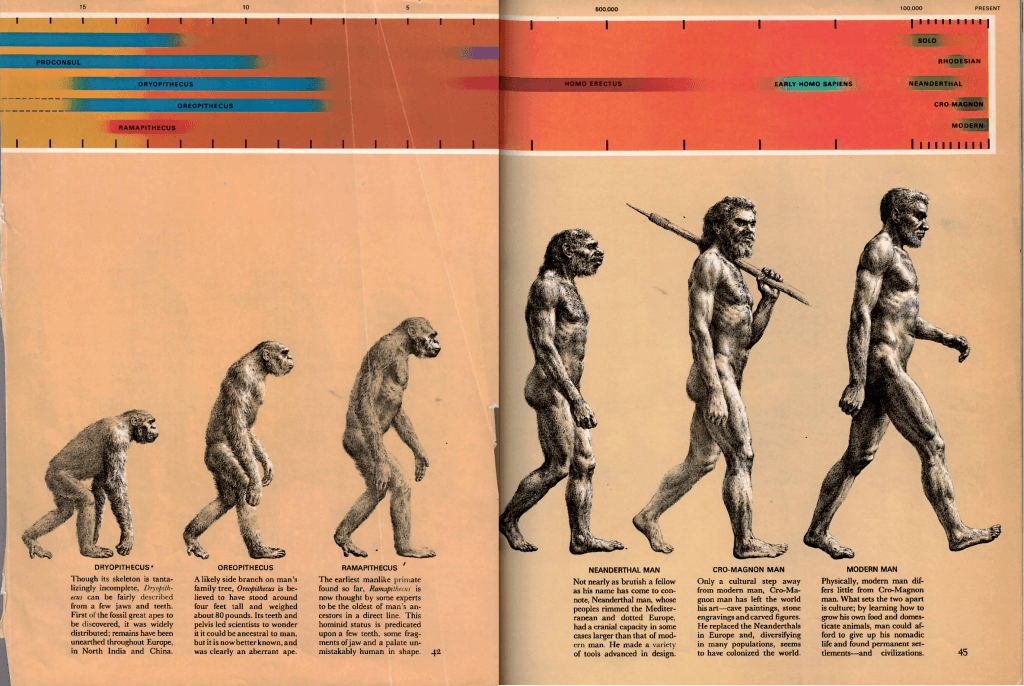 Just from the name, we can tell that this illustration is misleading. Remember myth #3? Evolution doesn’t have an end goal to progress towards.

This snapshot doesn’t show the whole story because it shows evolution as a linear process with one species neatly following the other. It’s more accurate to think about evolution as branching like a family tree. Humans didn’t evolve from apes; we are part of the same extended family tree. 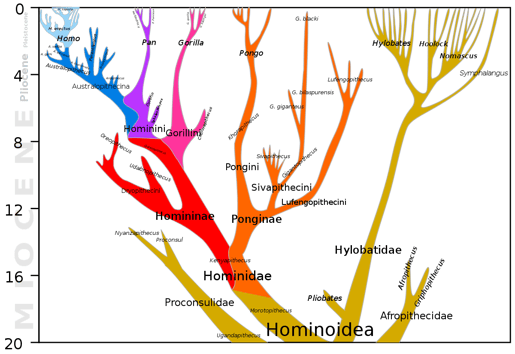 Scientists believe that there is no consistent rate of evolution, even in different populations within a species, but when you only look just at transitional fossils, evolution can look like it’s happening at a crawl.

A transitional fossil has traits in common with the species it descends from and the species that descend from it. Transitional fossils are commonly called “missing links” in pop culture—but we know from myth #2 that this phrase is misleading because it reinforces the incorrect idea that evolution is a linear progression, like climbing a ladder.

According to the National Center for Science Education, among all fossils, “Fossils with transitional morphology are not rare. Fossils illustrating the gradual origin of humans, horses, rhinos, whales, seacows, mammals, birds, tetrapods, and various major Cambrian ‘phyla’ have been discovered and are well-known to scientists.” The same applies to plant fossils as well. 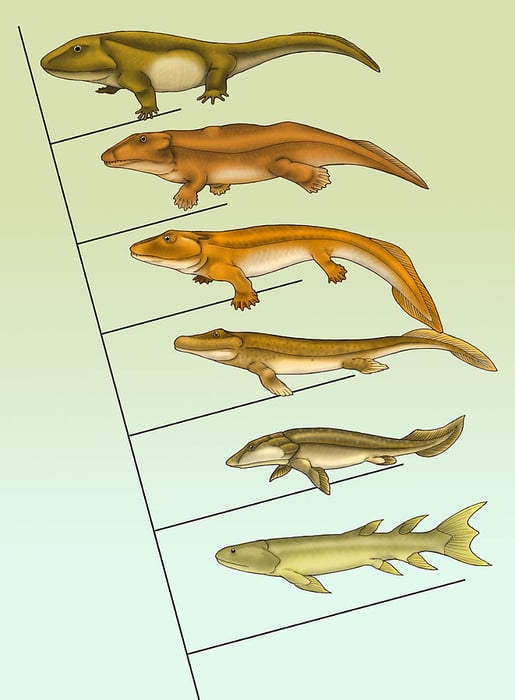 An illustration of tetrapod evolution based on transitional fossils. From bottom to top: Eusthenopteron, Panderichthys, Tiktaalik, Acanthostega, Ichthyostega, Pederpes. Image from Wikipedia Commons.

An important thing to remember is that transitional fossils don’t account for every single evolutionary change. When you consider the number of individual organisms that have lived on earth, fossilization is extremely rare, so when we’re talking about things that happened many millennia ago, we can tell that species have evolved, but it’s difficult to pin down exactly how they did so.

However, we can see evolution happening right before our eyes.

Remember back in myth #2 when we talked about an example of an insect species developing a resistance to insecticides? Over the past hundred years or so, over 500 species of insects, mites, and spiders have evolved some resistance to pesticides.

Extreme events like natural disasters can suddenly alter the requirements for surviving.

For example, medium ground finches evolved larger beaks after drought in the Galapagos in 1977. The small seeds the birds subsisted on became scarce, but birds with larger beaks could eat larger seeds. Many of the birds with smaller beaks died, and the larger-beaked birds reproduced more.

After a couple years of regular rainfall, the small seeds became abundant again, and in 1983, researchers observed that medium ground finches started having smaller beaks once again.

Darwin himself thought that it was impossible to witness evolution on a human timescale, but researchers have recorded many instances of evolution happening fairly quickly.

Want to read more about evolution? Check out these resources: