Walking is something that many of us take for granted, but it’s more complex than you might think. Today on the Visible Body blog, we’ll look at the mechanisms, anatomy, and evolutionary history behind walking on two feet.

Humans are unique among apes, not just for our big brains, but for our mode of movement. Unlike us, great apes (like gorillas and chimpanzees) have multiple ways of getting around, like fist-walking, vertical climbing, and clambering. They use these different modes of locomotion depending on their environments and situations. Humans, on the other hand, tend to do most of their movement while upright and on two feet.

How do we walk?

Like we said before, humans are special. Apes walk bipedally only for very short distances, and when they do, they usually hang on to a branch for support: they’re simply not built for bipedal locomotion. For example, chimpanzees walk bipedally in a much different way than humans. Their knees and hips remain bent and the body sways from side to side. Their ankles have weaker dorsiflexion—dorsiflexion is the way the ankle lifts the foot upwards towards the shin.

Our walking gait cycle consists of two phases that are made up of smaller stages.

Next, the rest of the foot makes contact with the ground during the support stage. The quadriceps femoris stabilizes the knee; the foot inverters and evertors stabilize the foot; and the gluteus minimus, gluteus medius, and tensor fascia lata contract, keeping the pelvis level.

Last in the stance phase is the toe-off stage, during which the leg prepares to leave the ground. The hamstring muscles extend the thigh, the quadriceps femoris keeps the knee extended, and the posterior compartment of the leg moves the foot downward and away from the body, a movement known as plantarflexion.

The next phase is the swing phase. First we have the leg lift stage, which has a pretty self-explanatory name. The iliopsoas and rectus femoris drive the knee forward, hamstring muscles flex the leg at the knee, and the anterior compartment of the leg raises the foot upwards in dorsiflexion.

Next comes the swing, where the leg is moved forward, creating the forward motion of the walk. The iliopsoas and rectus femoris resist gravity and keep the leg up, the quadriceps femoris positions the foot, and the anterior compartment of the leg keeps the ankle in the proper position for landing.

Wash, rinse, and repeat. The cycle continues until you get where you need to go.

The anatomy of bipedalism

Humans have many, many anatomical traits associated with bipedal locomotion. We’ll touch on a few here.

Broadly speaking, our pelvis and legs are arranged so that they balance our trunks atop our bodies while moving. Since only one limb touches the ground at a time during the walking cycle, balance is especially important. Our bodies minimize swaying from side to side.

Our legs are also longer than great apes’, making for a longer stride length, and our pelvis has a different shape: the ischium extends posteriorly, the iliac blades are shorter and wider, and the sacrum is wide. Humans have a larger acetabulum to accommodate a larger femoral head, which is important because when we walk bipedally, the hip takes on more weight than if we were to walk quadrupedally.

Our knees can lock, which keeps the leg straight and better facilitates shifting of weight onto that leg. Our ankles also help accommodate weight: the distal tibia’s talar articular surface is perpendicular to the long axis of the bone, which makes a more efficient transfer of weight from the leg to the foot.

A human’s foot is stiff for a better push-off, whereas an ape’s foot is flexible for use in climbing. Our proportion of toe length and tarsus length makes for more efficient propulsion during the stance phase. Our big toes are not opposable, so though we can’t really grasp things with our feet, we can bear weight more comfortably and effectively.

The evolution of bipedalism

During the Miocene epoch, there existed several lineages of apes. One of those lineages was the great apes, which today includes humans, chimpanzees, orangutans and gorillas. Humans and chimpanzees are closely related and form a subgroup called hominins.

Over the hundred-odd years that we’ve been piecing together the history of bipedalism, experts have come up with many theories on why we walk the way we do. Gaps in the fossil record mean that we don’t have a full understanding of the evolution of bipedalism, but over the past 50 years, exciting archeological discoveries have filled in some points on the timeline.

The gap in the fossil record exists because, as it turns out, fossils are really rare—we have fossil records of less than 1% of all species. Soft tissues and many bones do not fossilize well, and the circumstances for fossilization are very specific. The most common form of fossilization is permineralization, where water seeps into the bones and leaves minerals behind, forming crystals that eventually replace the bone tissues and form a hardened cast, preserving the shape and details of the bone’s tissues.

It has been estimated that one bone in a billion gets fossilized… and then the fossil has to be protected from erosion for millions of years, has to be in a discoverable place (for example, it can’t be buried beneath hundreds of feet of ice in the Arctic), and then it has to be discovered by someone.

We’ll never have all the answers, so let’s look at some possible explanations for why humans walk upright.

The first theory was by Charles Darwin himself, who posited in his 1871 book Descent of Man that humans became bipedal so that their hands could be freed to use tools.

Humans are the best tool-users, so it would make sense that our tool use and our bipedalism are connected. This theory was the predominant thought until a fossil of the species Australopithecus afarensis was discovered in 1974 in Ethiopia. 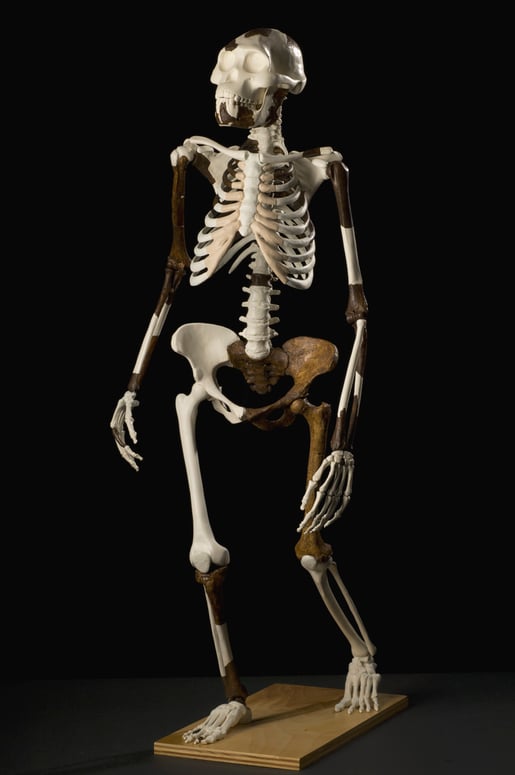 Reconstruction of Au. afarensis based on partial skeleton. Photo from the Cleveland Museum of Natural History.

Back to the drawing board.

Many have noted that the emergence of bipedalism corresponds with a shift in the environment. From the end of the Miocene to the beginning of the Pleistocene, the global climate became cooler and dryer. Hominins’ habitat had once been dense forest, but grasslands became more common as the environment became a patchwork of grassland, bushland, and woodland.

Some researchers have argued that, with their forest habitats depleted, hominins had to leave the cover of trees and walk the grassland, and the most energy-efficient way to do so was to walk bipedally. There have been some studies that examine the effort involved in chimpanzees’ bipedalism that have indicated that bipedal locomotion requires less energy on average. Chimpanzees may be our closest relatives, but our closest common ancestor lived over seven million years ago, and some believe it’s a stretch to apply this research to hominins. 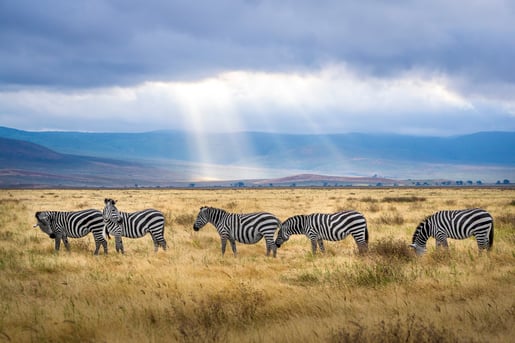 Another theory pertains to heat. Quadrupedal animals expose a lot of their body to the sun, and in a hot savannah environment, this could lead to overheating. A hominin on two feet could absorb 60% less heat than on all fours, and they could be exposed to more cooling breezes. Bipedal locomotion could cut down on the amount of water necessary, meaning that early hominins could cover more ground in search of food.

Instead of bipedalism helping carry tools, it might have helped hominins carry food. Because their habitat shifted, hominins may have had to travel further to find food. This means that they would have to carry food over longer distances to share with their group.

All in all, it’s likely that bipedalism arose from a combination of several of the factors mentioned above.

“Natural selection cannot create a behavior like bipedalism, but it can act to select the behavior once it has arisen,” wrote Dr. Donald Johanson, the paleontologist who discovered the Au. afarensis specimen we mentioned before. “Surely some early hominids were better at upright walking than others, a behavior that permitted them to forage widely and bring back food to a home base.”

He argues that hominids became upright and then were able to expand their territory into the grasslands, where our bipedalism helped us thrive by protecting us from overheating, allowing us to collect and carry food, look over tall grass, and more.

Us humans have a unique anatomy that sets us apart from other apes. Over the millennia, bipedal locomotion has helped humans and their early ancestors thrive in their environments. Eventually, bipedalism helped humans better use tools—like the one you are using to read this blog post right now.