When I think back to dissection day in high school biology class, I remember these aspects the most: the overpowering smell of formaldehyde, getting too absorbed in the dissection process to be grossed out, and the fact that it was a one-time thing. I know we had plenty of other lab days in biology class, but the dissection lab is the one I remember best, because it was much more engrossing than usual.

My surprisingly exciting lab day memory came back to me when I had the opportunity to interview Dr. Robert Hasel, whose top priority is keeping graduate students engaged and engrossed. A passion for technology fueled the debut in August of a virtual dissection lab at Western University of Health Sciences in Pomona, CA. As Associate Dean for Simulation, Immersion, and Digital Learning for the college of Dental Medicine, Dr. Hasel's ultimate goal is to give students an immersive experience with virtual dissection while they gain gross anatomy knowledge that lasts. 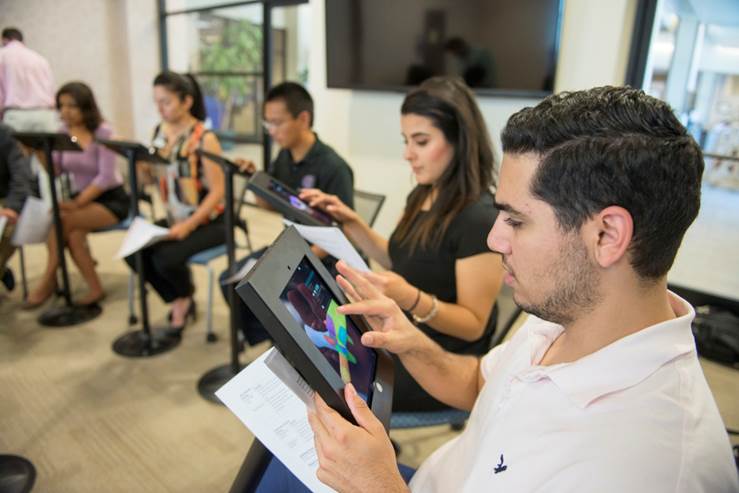 Students in the VRLC hard at work on an activity.

During a four-hour lab session, students rotate between learning stations in teams of two or four, practicing their anatomy knowledge through specific activities. At the Atlas iPad station, for example, students have to complete an activity in 15 minutes. In pairs, and armed with a preset identification list of anatomical structures, students explore an anatomy view. The goal is to identify the names of the anatomical structures and note an important feature of each one. Sometimes the students have a race to see which team can complete a quiz by correctly identifying the most structures in the shortest amount of time.

Helping students and instructors adapt to the virtual lab has been a key element of the lab’s success. Here's are Dr. Hasel's tools of the trade:

With guidance and a little bit of an adjustment period, he says, students go from reluctant to energized.

The concept of “hands-on” dissection is evolving, and Dr. Hasel emphasizes several reasons why virtual dissection is a valuable supplement—and a truly special teaching tool. Only about 5% of health science students have access to cadavers, he says, and those who do only get to spend a few hours per year in the cadaver lab. Of the 8-10 students in each group, "you have just one or two actually doing the dissection. And the tissue looks like beef jerky; it's not similar to human tissue that's alive. You can't tell one thing from another.” If students make a mistake in the dissection, they've ruined the cadaver, Dr. Hasel says, but with virtual dissection, if students make a mistake, they just refresh their screen.

Dr. Hasel has been passionate about 3D imaging for many years. One of the great advantages he sees is that 3D models resonate with students in a way that 2D images don’t. In Dr. Hasel's words, learning in 3D "is how we learn in this world and how people form images in their brain." 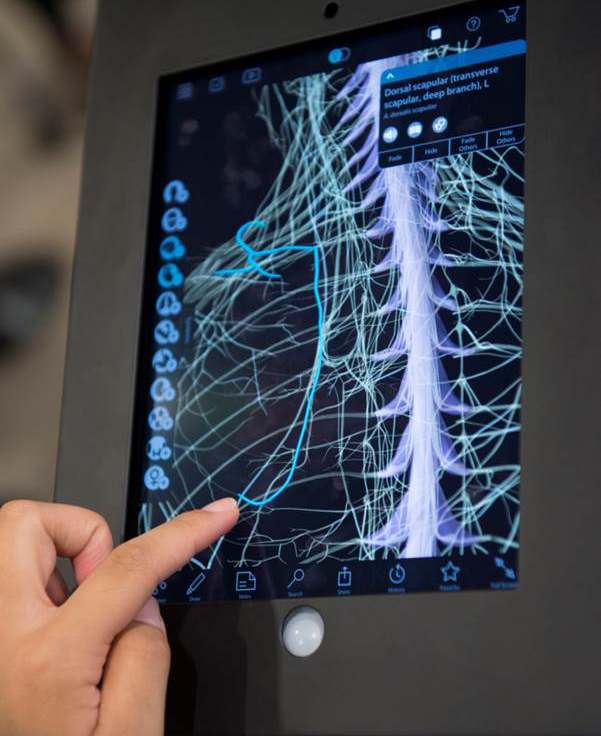 In explaining the appeal of the virtual lab experience, he says, "This is not a PowerPoint in a lecture hall. Students are excited to get in there and get going. Engagement is the biggest difference. They have to interact with the learning activity they're assigned to at that station... It's an extreme contrast because it's not a passive environment. It's a four-hour lab and we have to kick them out."

What really makes 3D learning technology useful, Dr. Hasel tells us, is building a skin of curriculum around the technology. It can take some adjustment for students and instructors to get used to switching both to a flipped classroom and to learning anatomy with 3D imaging. Compared to a lecture environment, it's a big change, but one that enables the knowledge to stick: "You’re taking responsibility for your own learning...for 26 years you're spoon-fed information, you're tested on it, then it goes away. The result with our lab is that students learn a lot more and can apply their knowledge to an everyday situation."