The Petulant Pebbles (Cont.): The Anatomy and Pathology of Gallstones

Last week we introduced the stones family—kidney edition—and today we’re tackling that distant awkward cousin of theirs (who everyone only pretends to like). You’ll be spared my personal anecdotes this week, as my lengthy and rather bizarre medical history has yet to include a bout with the gallbladder. Thank goodness, because absolutely nothing about having these hard, pebble-like bile compounds seems fun. 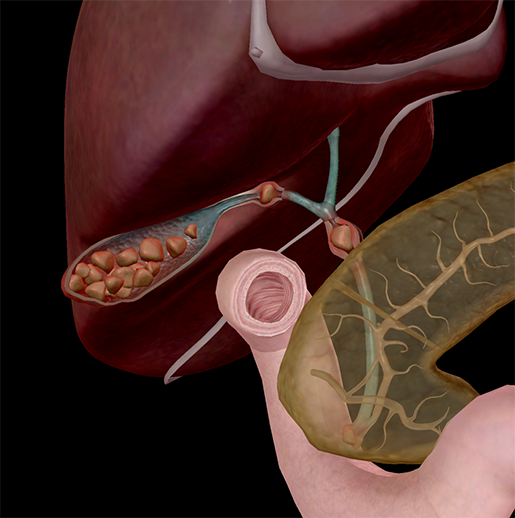 Technically known in the medical community as cholelithiasis, gallstones form in the gallbladder. A small, pear-shaped, hollow structure located under the liver and on the right side of the abdomen, the gallbladder stores bile, a fluid produced by the liver to help digest fat in the foods we eat. As with all organs, things can go awry inside it, and when they do, material in the bile sticks together and forms hard, pebble-like objects (gallstones), which can be classified into two types:

Unfortunately, these stones are sneakier than their kidney cousins, as some who have gallstones may not be symptomatic. By simply existing in the gallbladder, gallstones can be relatively benign; complications arise when one becomes lodged in the neck of the gallbladder, causing inflammation and pain. Some key gallstone symptoms to look out for include:

So... how serious are these stones? The short answer is it depends where they end up. If gallstones block the common bile duct through which bile usually flows from the gallbladder or liver to the small intestine, this can lead to jaundice and infection. Additionally, blockage of the pancreatic duct results in not only a lack of digestive juices passing through to the intestine, but also results in pancreatitis. Finally, those with a history of gallstones also have an increased risk of gallbladder cancer.

So... are you at risk? While there has yet to be one specific genetic or environmental cause identified for gallstones, having a family history, being on certain medications, leading a sedentary lifestyle, being pregnant or having diabetes or liver disease, as well as eating a high-fat, high-cholesterol or low-fiber diet can increase your risk. What causes gallstones from a biological standpoint? Let’s take a look at three of the main culprits:

Finally, keep in mind that the stones don’t necessarily stick to one-time guest appearances, so getting rid of one doesn’t mean you’ve gotten rid of them for life. Another thing to note (for those of you averse to doctor’s office visits despite sometimes obvious and ominous symptoms) is that while small gallstones can leave the body on their own, that does NOT mean you should ignore symptoms. In fact, just the opposite: as in the case of gallstones, becoming symptomatic indicates a blockage, a prognosis that will certainly require treatment and may even require medication or surgery. Yikes.

“A To Z: Cholelithiasis (Gallstones).” KidsHealth, The Nemours Foundation.