The Endocrine System: The Adrenal Glands and the Stress Response

Stress is a pretty big deal in modern society. Most of us spend a lot of time either feeling it, trying to relieve it, or both.

So, what is stress? At its core, stress is all about how the body reacts to a potential threat. The fight-or-flight (or fight-flight-freeze) response, aka the “alarm” stage of the stress response, is there for a good reason—it prepares the body to deal with danger (you know, like outrunning a ferocious animal that’s trying to eat you, or fighting off a fellow cave-person coming at you with a spear). Once the danger has passed, the body goes back to business as usual.

Chronic stress, on the other hand, happens when the body is constantly responding to stress and remaining in a heightened state for a long time. It can really do damage to the body over time.

Today, we’re going to talk about both of these types of stress—the classic fight-or-flight response as well as what happens when your body experiences persistent stress.

When it comes to the body’s stress response, the adrenal glands are the stars of the show. My colleagues here at VB like to refer to these guys as “the party hats of the kidneys,” which is a pretty apt description considering their fun pointy shape and the fact that there’s one sitting atop each kidney. You might also know the adrenal glands as the suprarenal glands for this reason—suprarenal literally means “above the kidney."

Let's check out the adrenal glands in context in Human Anatomy Atlas: Each adrenal gland has two main parts: an outer cortex, which makes up the majority of the gland, and an internal medulla. The cortex is composed of glandular epithelial tissue, whereas the medulla is made of nervous tissue.

The medulla produces epinephrine/adrenaline (E) and norepinephrine/noradrenaline (NE). Epinephrine is the principal hormone that interacts with the sympathetic nervous system in the initial part of the fight-or-flight response.

Now that you’ve gotten to know the adrenal glands a bit, let’s go step-by-step through the fight-or-flight response.

When your senses perceive a dangerous or threatening event, this triggers the amygdala—part of the limbic system involved in memory and emotion—to sound the first alarm. Basically, the amygdala presses the big, red “PANIC” button or, if you like thinking in terms of Lord of the Rings references like I do, lights the beacon at the top of the mountain that means “Gondor calls for aid!”.

The hypothalamus, a key player in the endocrine system, sees that beacon and musters the soldiers of Rohan to help—that is, it activates the sympathetic nervous system. This, in turn, signals the adrenal glands to secrete epinephrine and norepinephrine into the bloodstream. 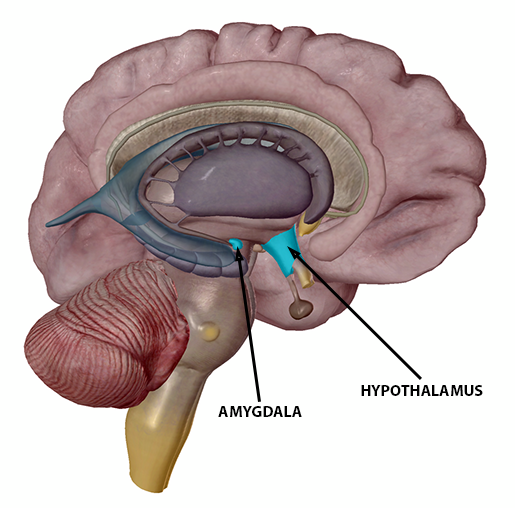 The release of epinephrine helps the body respond to danger in a number of ways. The bronchioles in the lungs expand, and the rate of respiration increases, allowing for greater oxygen intake. The heart beats faster, causing a rise in pulse and blood pressure. All this is so that the muscles and the brain can get all the blood (and therefore oxygen) they need to function optimally.

Other physiological changes that occur during the fight-or-flight response are dilation of the pupils and increased tension in the muscles as they prepare to move. Digestion and reproductive functions are suppressed. 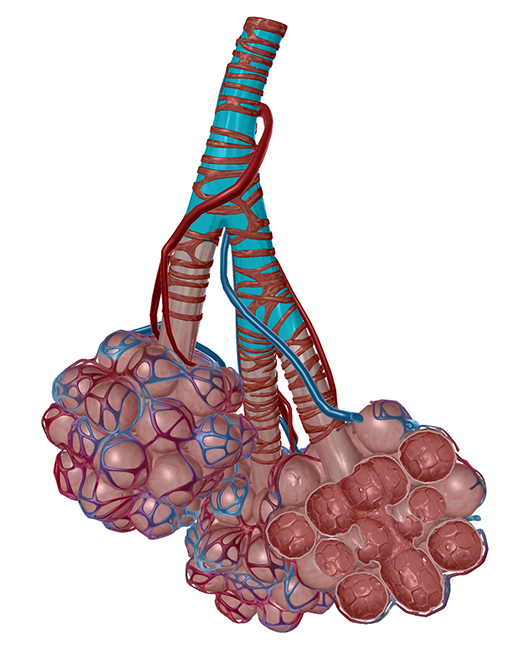 Microanatomy view of a terminal bronchiole from Human Anatomy Atlas.

Need a good way to remember epinephrine’s role in the stress response? Think about what an EpiPen (a shot of epinephrine) does to counteract a severe allergic reaction. While anaphylaxis constricts airways and lowers blood pressure, epinephrine from the EpiPen relaxes muscles in the airways, helping them to expand, and constricts the blood vessels, boosting blood pressure. It also increases heart rate and blood flow to the heart.

Ok, back to the short-term stress response. If the perceived threat remains beyond that first rush of epinephrine, a system called the HPA axis will kick in to help the body stay alert and ready for action. HPA is a super helpful acronym—it not only represents the hypothalamus, pituitary, and adrenal glands, but it also does so in the correct order.

ACTH travels through the bloodstream from the pituitary gland and signals the adrenal glands to release cortisol, which you might know as “the stress hormone.” Cortisol helps give the body the energy it needs to stay on high alert for a bit longer by signaling several organs in the body to make changes impacting blood glucose levels.

When cortisol levels are high, the liver will increase gluconeogenesis, the production of glucose from stored glycogen. Similarly, adipose tissue will respond to high cortisol levels by increasing lipolysis, the breakdown of fats into glycerol and fatty acids. Increased cortisol causes the pancreas to decrease insulin levels and increase glucagon.

Let’s say you experience the fight-or-flight response while driving your car and you have to swerve suddenly to avoid an accident. You’ll most likely react in a split second, and you’ll feel that increase in pulse and respiration. Maybe your hands will be a little shaky as you continue driving. Now that the threat has passed, however, your body is free to calm down.

Recovering from an (everyday) acute stress response usually takes between 20 and 30 minutes. According to the general adaptation syndrome (GAS) model of stress responses, the period in which the body starts to wind down from a fight-or-flight response is called the resistance phase. Cortisol levels (hopefully) drop, the sympathetic nervous system dials down its activity, and the parasympathetic can resume its “rest and digest” functions.

If the body is not able to recover, it will eventually become exhausted, leading to fatigue, depression, and anxiety. This is when stress can take on it’s most insidious form: chronic stress.

The dangers of chronic stress

Chronic stress happens when the body is constantly responding to stress and is not able to fully recover. Cortisol remains high even for long periods of time. High-pressure jobs, financial hardship, relationship troubles, and trauma are just a few sources of long-term stress that can have harmful psychological and physiological effects.

Continuous fight-or-flight responses and HPA activity are rough on the body. Chronic stress can increase the risk of a number of health conditions including, but not limited to:

You also may have heard of a recent study by Zhang et al. confirming that stress can actually make your hair turn prematurely grey. Well, it’s true! It turns out that the norepinephrine, used as a neurotransmitter by the sympathetic nervous system’s response to stress, depletes a population of skin cells called melanocyte stem cells (MeSCs). MeSCs generate new melanocytes, the cells responsible for giving hair its pigment.

Zhang et al. found that because of a certain receptor on the outside of the MeSCs, norepinephrine causes all the MeSCs in a given hair follicle to differentiate into melanocytes all at once. The next time a hair grows from that follicle, there won’t be any melanocytes to give it pigment because there are no MeSCs left to generate new melanocytes. 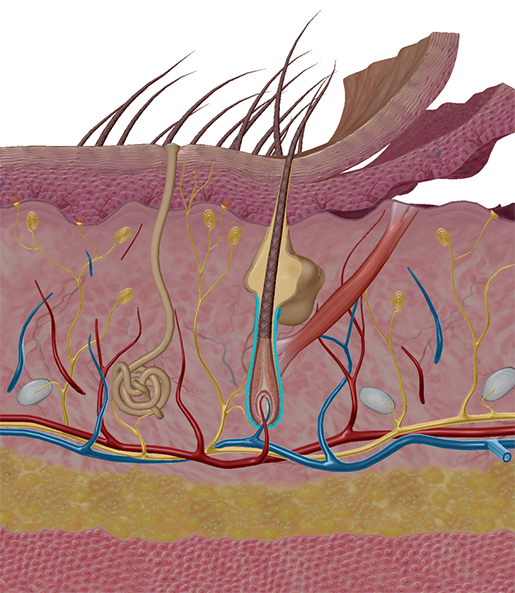 In a review of the Zhang et al. study, Clark & Deppmann suggested that norepinephrine from the sympathetic nervous system’s stress response could affect other populations of stem cells in a similar way. That’s definitely a cool avenue for further research!

There is a variety of different adrenal gland disorders, depending on the over or underproduction of hormones in the adrenal glands. For now, we’ll focus on cortisol, since it’s important to the body’s stress response.

Cushing syndrome happens when there is too much cortisol in the body. There are two types of Cushing syndrome: exogenous and endogenous. Exogenous Cushing syndrome is the result of high intake of corticosteroids from outside sources—usually medications such as prednisone or dexamethasone, which are used in the treatment of conditions like rheumatoid arthritis, lupus, IBD, and MS.

Symptoms of Cushing syndrome can include weight gain and fatty deposits in the upper body, purple stretch marks on the abdomen, skin that easily bruises, growth of facial hair, muscle weakness, and bone loss. If left untreated, Cushing syndrome can lead to osteoporosis, hypertension, and diabetes.

If the cause of Cushing syndrome is a tumor, surgery is usually the first treatment method used. Radiation treatment, as well as medication to control cortisol production, may also be necessary.

Addison’s disease, also called primary adrenal insufficiency, is the “opposite” of Cushing syndrome—it is an autoimmune disorder in which the adrenal glands don’t produce enough cortisol (and they often also don’t produce enough of a hormone called aldosterone, which acts in the kidneys to regulate sodium and potassium levels in the blood). In cases of Addison’s disease, the immune system attacks the cortex of the adrenal glands, damaging them over time.

The list of symptoms of Addison’s disease is long, but some notable symptoms include:

We just threw a lot of information at you, so let’s recap with a handy chart!

The key players in the body’s response to stress are as follows:

Also, remember that although the acute stress response is important to our survival, helping us react in time to get out of potentially life-threatening situations, experiencing chronic stress can have a detrimental effect on one’s health.

Want to learn more about the key structures and functions of the endocrine system? Check out our Endocrine System eBook!