The 5 Coolest Medical Stories of 2019

It’s that time of year again, folks! 2020 is nearly upon us, so it’s time to review some of the coolest medical stories of this year. Get ready to be inspired by these stories of innovation and achievement!

In October, a 25-year-old occupational therapy Masters student named Jenna Schardt elected to have her awake brain surgery livestreamed on Facebook. The surgery, conducted at Methodist Dallas Medical Center by Dr. Randall Graham and Dr. Bartley Mitchell, was necessary to remove a mass of blood vessels in her brain that was causing her to have seizures and impairing her ability to speak.

This surgery is interesting not only because the patient agreed to have it livestreamed but also because during part of the procedure, she needed to be awake so doctors could map out the parts of her brain related to speech and motor functions. They wanted to make sure their strategy for removing the tangle of blood vessels from Jenna’s brain wouldn’t effect these areas. This type of procedure is called awake brain mapping. 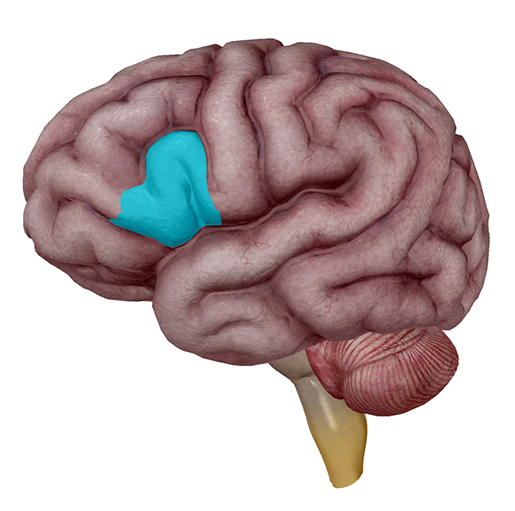 When it comes to speech and the brain, Broca’s area (the pars triangularis and pars opercularis of the left inferior frontal gyrus) is the usual suspect. Image from Human Anatomy Atlas.

If you’ve got about 45 minutes to spare, I’d highly suggest watching the livestream here. Don’t worry—there’s no blood, since the actual surgical site is covered by a sheet. One of the reasons this procedure was livestreamed was to educate the public about awake brain surgeries, and to show that they’re really not as frightening as they seem.

At the beginning of the livestream, Jenna is under anaesthesia, but she wakes up a couple minutes in. As the commentators (a PR representative and the head of neurosurgery at the hospital) assure viewers, she is in no pain. Local anaesthesia around where her skull was opened ensures this. In addition, the brain itself doesn’t have pain receptors on its surface.

Once she’s awake, a neurologist shows Jenna words on an iPad, which she reads aloud while the surgeons stimulate different regions of her brain to see whether her speech is impacted. Throughout this time, the operating room staff makes sure she is comfortable. She even has a conversation with the neuro-monitor about her dog before she goes back under anaesthesia so that the surgeons can complete the procedure.

If you’re interested in neuroscience or speech science like I am, you should definitely check this out. This livestreamed surgery is a fantastic piece of patient education, and it’s awesome that Jenna was willing to share her experience with the world. It’s also great that the procedure was successful and Jenna is recovering well. What a technologically amazing world we live in!

2. Progress on vaccines for Ebola and malaria

You may remember our article on Ebola virus disease from August, in which we mentioned that a vaccine was being used to help control the ongoing outbreak in the Democratic Republic of the Congo (DRC). Ebola is a hemorrhagic fever which spreads via contact with the bodily fluids of infected individuals.

Earlier this year, a vaccine manufactured by Merck, called Ervebo, was administered in a “ring style,” where people who were at a high risk of contracting Ebola were vaccinated first, followed by people who were in close contact with the group being vaccinated. More than 250,000 people have received the Merck vaccine, which has recently been given marketing authorization by the European Commission, making it the first approved Ebola vaccine. Ervebo has also been prequalified by the WHO, which will make it easier for at-risk countries to get access to it more quickly.

As of November, a second vaccine—this one manufactured by Johnson & Johnson—will be joining the first in the fight against Ebola. The goal is to conduct a clinical trial of this vaccine in at least 50,000 people. It will be available to adults and children over one year old living in particular regions of the city of Goma. Scientists are optimistic about these two vaccines’ ability to combat Ebola, especially since the J&J one is better for people who haven’t already been exposed to the disease, and the Merck is better used in the middle of an outbreak.

There has also been progress towards creating a vaccine for another deadly disease, malaria. Malaria is caused by a parasite (Plasmodium falciparum) spread by mosquitoes. The parasite infects the red blood cells (erythrocytes) of its human hosts. Malaria claims many lives each year, especially among children in developing countries. 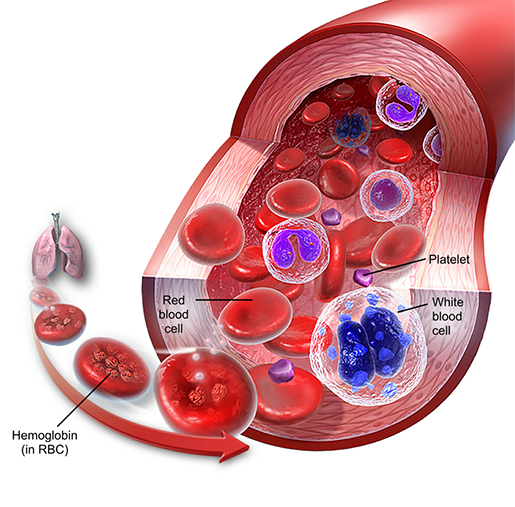 Composition of blood. Image from A&P 6.

In April, a pilot program of a vaccine known as RTS,S began in Malawi (and expanded to Ghana and Kenya). In clinical trials, RTS,S was able to prevent 4 in 10 cases of malaria in children, and reduced the level of severe anemia caused by malaria by 60%. The trial is a collaboration between GlaxoSmithKline (the vaccine manufacturers, the UN, the health ministries of Ghana, Kenya, and Malawi, as well as several other national and international organizations.

The goal of the vaccine pilot program is to vaccinate 360,000 children a year in the three countries involved in the trial—hopefully, the program will not only save lives on its own but will also bring the world closer to finding a reliable way to prevent malaria.

Cystic fibrosis (CF) is a genetic disease in which mutations of the CFTR (cystic fibrosis transmembrane conductance regulator) gene cause the CFTR protein to become dysfunctional.

Ultimately, this leads to the body’s mucus becoming thick and sticky. In the respiratory system, the sticky mucus traps germs and clogs up airways, causing frequent lung infections and trouble breathing.

The trachea, lungs, and pleurae. Image from Human Anatomy Atlas.

The digestive system can be affected as well: when mucus builds up in the pancreas, the release of digestive enzymes made by the pancreas is impaired. In addition, liver disease can result from mucus blocking the bile duct. 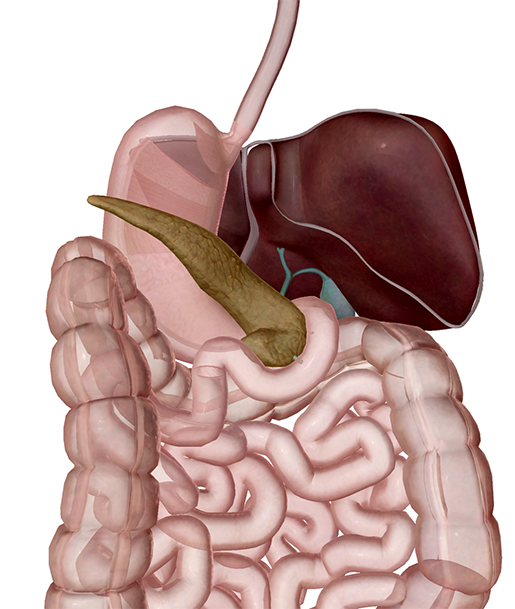 The accessory organs of the digestive system: the liver, gall bladder, and pancreas. Image from Human Anatomy Atlas.

Around 70,000 people worldwide have CF. It used to be the case that most people with CF died in childhood, but as treatment options have improved, more and more people with the condition have been able to live to adulthood. Unfortunately, it still often proves fatal.

There’s good news, though! Just this October, a drug that can help 90% of people with CF was approved. Trikafta, developed by Vertex Pharmaceuticals, is a combination of three medications that drastically improves lung function in people with the most common CFTR mutation (Phe508del or F508del).

Though people with rarer mutations may not be able to benefit from this new drug, the Cystic Fibrosis Foundation announced an initiative aimed at finding treatments that will help them, too.

In September, an advisory panel from the FDA voted to approve a new drug called Palforzia, which is intended to reduce the risk of severe allergic reactions to peanuts in kids aged 4-17.

The drug contains a small, standardized dose of peanut flour that can be gradually increased, providing children with a way to build up their tolerance to peanuts. Though this treatment is by no means a “cure,” it will allow allergy sufferers and their families some peace of mind because it will decrease the risk of having a severe reaction (such as anaphylaxis) as a result of accidental exposure to peanuts.

It should be noted that participants in the clinical trials for Palforzia did experience some side effects, including allergic reactions to the peanut powder in the drug as well as “coughing, hives, itching, throat irritation, nausea, and vomiting.” Nine percent of participants dropped out of the trial due to these negative effects. However, two-thirds of the clinical trial participants could handle about 600mg (two peanuts’ worth) of peanut protein following treatment.

Palforzia is still awaiting final approval (which should happen this coming January), and more research on its safety and efficacy will likely be needed, but it nevertheless represents a step forward in improving quality of life for children and teens suffering from potentially life-threatening peanut allergies. Given that 2.5% of American children have a peanut allergy, this treatment has the potential to help a lot of people.

5. An EEG study of baby hiccups!

That’s right, baby hiccups. A group of researchers from University College London published a paper in the December issue of Clinical Neurophysiology that provides a fascinating explanation for why babies hiccup so much. (Full disclosure: this is easily the most adorable scientific study I’ve read all year.)

First off, let’s define what a hiccup is. Most simply put, it’s a contraction of the diaphragm, which causes intake of air, and subsequent closing of the vocal folds (that’s where the “hic” sound comes from).

Babies start hiccuping even before they’re born. Moms usually become aware of fetal hiccups during the second or third trimester, but hiccups have been detected via ultrasound as early as nine weeks gestational age.  The authors of the current study state that “hiccups typically occur in bouts, which last for approximately 8 minutes, and happen predominantly during active behavioural states in fetuses, and during wakefulness in neonates.” Previous research suggests that, all in all, preterm infants spend about 1% of their day hiccuping. So yes, babies hiccup A LOT.

In this study, the researchers used EEG (electroencephalography) to look at the brain response to hiccups in 13 newborns between 30-42 weeks gestational age (both preterm and fullterm infants were included). They examined patterns of electrical activity, measured by electrodes at the scalp, time-locked to hiccup events.

Their results showed a “clear cortical response” to hiccups—a series of three specific event-related potentials (brain responses time-locked to stimuli). Ultimately, they concluded that the babies’ responses to their hiccups indicated that “contractions of respiratory muscles provide sensory input from the internal body environment to the developing brain and may provide the necessary information for the formation of interoceptive representations.”

So it seems like babies’ hiccups help them to develop a brain-representation of their own body. Frequent limb muscle contractions serve this function in newborns, so it would make sense that a contraction of respiratory muscles would occur for a similar reason.

As for why adults hiccup, or how to “cure” hiccups...there’s still not a totally solid answer.

And there you have it—five of this year’s coolest medical stories. Here’s to a 2020 filled with even more scientific advances!