In last week’s post, we started talking about unusual sensory experiences by discussing ASMR. This week, we’ll shift our focus over to synesthesia. We’ll go over what it is, what scientists tell us is different about the brains of people who experience it, and how it might (or might not) be connected to ASMR.

The brain in all its glory. Image from Human Anatomy Atlas.

For people with this biological condition, one form of sensory input can trigger a co-occurring sensory experience.

Synesthesia’s sensory manifestations are quite diverse, so there is a wide variety of different sense combinations that synesthetes experience. For example, an auditory-visual synesthete might see music in a variety of colors or shapes, and a grapheme-color synesthete would perceive particular numbers or letters in particular colors. Some synesthetes experience touch sensations while listening to music, and others see peoples’ words and ideas as shapes. Grapheme-color and auditory-color are the most common types of synesthesia.

No matter what blend of senses is involved, synesthetic experiences share several distinctive characteristics. First of all, synesthetic perceptions are involuntary. A synesthete will have their dual-sense experience whether they are consciously thinking about it or not.

The perceptions are also consistent, meaning that the pairings between specific stimuli are always the same. I’ll use a personal example here—I’m a grapheme-color synesthete. When I think of or read the number 8, I always experience it as a dark, plum-like shade of purple. Because of this consistency, synthetic perceptions can often be good memory aids (number-color connections are great for remembering phone numbers and zip codes!).

Many synesthetes perceive synesthetic experiences as projections outside their body (the research calls them ‘projectors’), but others (‘associators’) have synthetic experiences such as color in their “mind’s eye”. For example, a grapheme-color synesthete may read a number in the color it’s written, but they will also perceive it internally as the color they associate it with. If you’re curious, this video from Numberphile provides a great description of what grapheme-color synesthesia feels like!

(Speaking of the “mind’s eye,” there’s also a condition called aphantasia, in which the mind doesn’t produce visual imagery.)

Lastly, synesthetic experiences can also sometimes elicit strong emotional reactions. We’ll come back to this later, since this is related to the connection between ASMR and synesthesia.

So, what’s different about synesthetes that allows for these unusual sensory experiences? Demographically, synesthesia seems to be more common in women and left-handed people. However, it’s difficult to figure out exactly what percentage of people are synesthetes—many people probably have synesthesia but don’t know it.

One thing we do know for sure is that synesthesia runs in families. This is really convenient for scientists trying to figure out its biological basis! A 2011 study that analyzed the DNA of individuals from five families containing four or more color-grapheme synesthetes connected their synesthesia to a region on the 16th chromosome (16q12.2-23.1, if you’re curious). Though there are 343 genes in this region, the authors of the study found six they think might be good candidates for producing synesthesia:

It should be noted that this chromosomal region was linked to synesthesia in only two of the five families, which the researchers say suggests that color-sequence synesthesia is a heterogeneous condition, meaning that the same phenotype can be produced by multiple genotypes.

A similar study conducted in 2009 looked at auditory-visual synesthesia across the genomes of individuals from several families. The results showed significant linkage to a region of chromosome 2 (2q24), as well as linkage to regions on chromosomes 5 (5q33), 6 (6p12), and 12 (12p12). The authors suggested that, based on their results, auditory-visual synesthesia is heterogeneous and caused by mutations to a small number of different genes (oligogenic).

Tomson et al., the authors of the 2011 study discussed above, summed it up best: “The difference between the synesthetic and non-synesthetic brain, therefore, appears to be not whether there is crosstalk, but rather how much there is.” Basically, what this means synesthetes and non-synesthetes differ in terms of how much the different parts of their brains “talk” to each other.

Back in 2002, an fMRI study by Nunn et al. found that color-hearing synesthetes, who associate spoken words with colors, showed activation of either V4 or V8 (the “color centers” of the brain) when presented with spoken words. 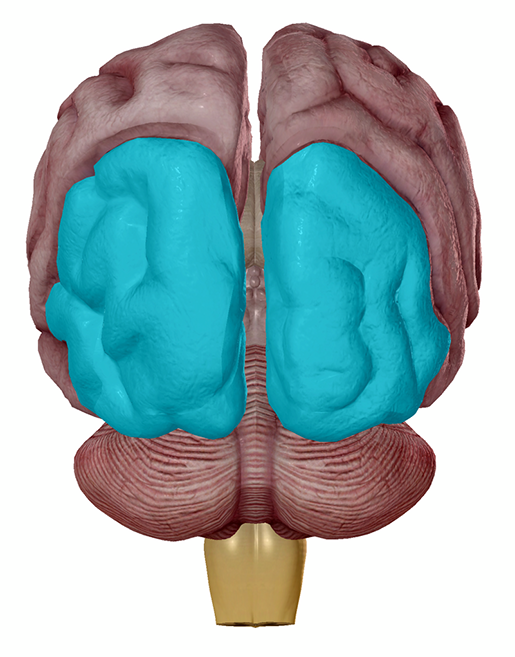 The visual cortices are located in the occipital lobe of the brain. Image from Human Anatomy Atlas.

In contrast, non-synesthete controls did not show activation in these regions in response to spoken words, even when they were trained to associate particular words with particular colors.

Rouw & Scholte (2007) conducted a diffusion tensor imaging (DTI) on grapheme-color synesthetes. DTI is an MRI technique that looks at how water diffuses through tissue—it is used in neuroimaging to assess the “orientation and direction of white matter fiber tracts”. White matter is made up of the axons of the neurons in the CNS—it’s the highway system of neural communication. 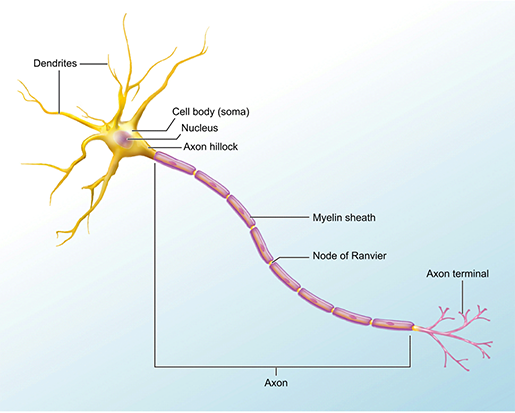 The structure of a neuron. Image from A&P. 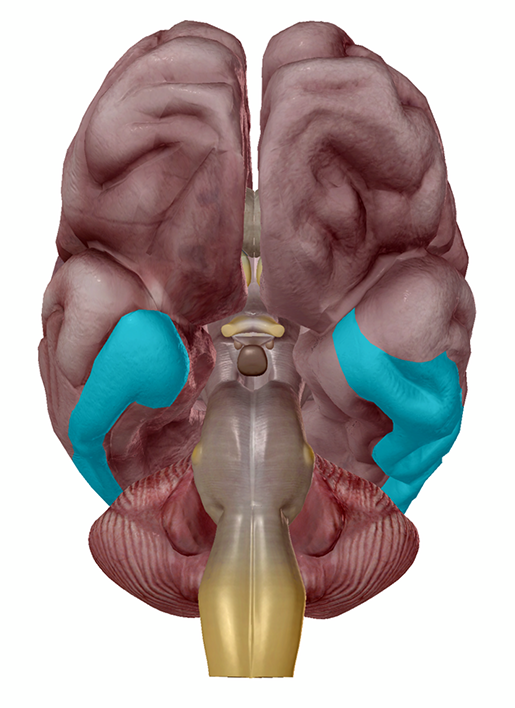 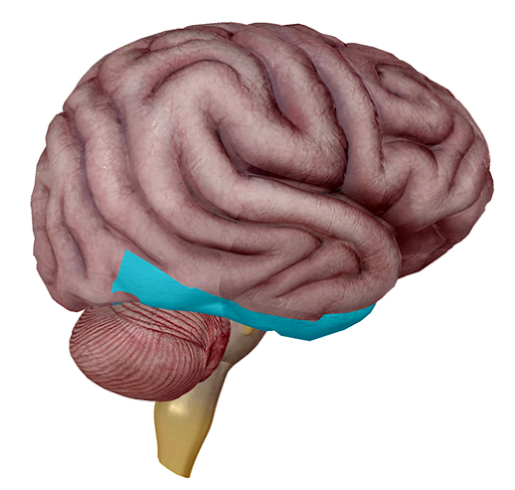 Interestingly, this data on connectivity differences between synesthetes and non-synesthetes is consistent with the idea that synesthesia is related to genes dealing with brain development processes such as neural pruning, myelination, axonal growth, and the migration and differentiation of neurons. These processes are responsible for how neurons organize themselves and connect with one another early on, so abnormalities in the way they occur might affect connectivity later.

Could ASMR and synesthesia be connected?

Barratt & Davis (2015) reported that of the 475 ASMR-sensitive individuals who participated in their study, 5.9% (~28 people) were also synesthetes. The authors had a few ideas about why this might be, and they provided a brief and fascinating discussion of a possible connection between ASMR and synesthesia, as well as ASMR and misophonia, a condition in which certain everyday noises (usually the noises of people chewing, breathing, sniffing, tapping, etc.) can induce a fight-or-flight response.

Perhaps the strongest shared characteristic across these conditions is that the emotional/sensory experiences in all three are automatic. If an F# played on the piano is green for a sound-color synesthete, they’ll experience green every time they hear that F#, no additional focus or intention required. The “brain tingles” felt by ASMR-experiencers are involuntary—they just happen in response to certain stimuli. Similarly, if a person with misophonia hears a trigger sound, they will feel anger or anxiety no matter how they try to block it out (thanks, sympathetic nervous system).

Barratt & Davis also put forward the idea that perhaps ASMR is a type of sound-emotion synesthesia that elicits a strong positive emotional response, and misophonia is a sound-emotion synesthesia that elicits a strong negative emotional response. That’s certainly a cool hypothesis—it will be interesting to see whether further research into ASMR, synesthesia, and misophonia supports it.

Think you might be a synesthete? Check out the synesthesia battery here and contribute to ongoing research!

If you’re  interested in learning more about the neural bases of misophonia, here are a few recent papers on the subject: