Whether it comes from the sun, a lightbulb, or a campfire, light is an important component of our world. We rely on it for our sense of vision, for example: light is refracted by the eye’s cornea, passes through the pupil, and is focused onto the retina by the lens. Then, light-sensitive cells (or photoreceptors) pass signals to the vision areas of our brain. But light can help us do more than see! It turns out that researchers are looking at ways in which different wavelengths of light could help medical professionals treat brain injuries and disorders (like traumatic brain injury and Alzheimer’s Disease) as well as migraines and chronic pain.

So let’s examine some recent studies and see the ways in which light therapy could be helpful to patients!

Near infrared light for brain disease and injury

One field of light therapy research that has shown promising results is tPBM, or transcranial photobiomodulation. Essentially, what this means is that red or near infrared light is applied to the scalp or forehead, and that light has an effect on biological processes in the body’s cells.

Which biological processes are these? According to a 2016 review paper in the journal BBA Clinical, “most authors suggest that the beneficial effects of tPBM on the brain can be explained by increases in cerebral blood flow, greater oxygen availability and oxygen consumption, improved ATP production and mitochondrial activity.” So it looks like tPBM primarily affects blood flow, oxygen availability, and metabolism (which are pretty much all connected, given that oxygen allows our body’s cells to produce energy). 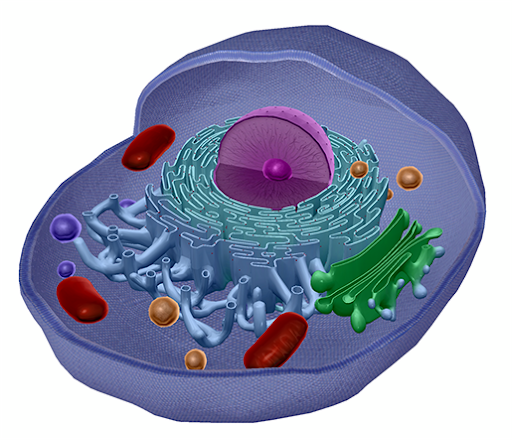 The mitochondria are the red structures that look like kidney beans! Image from Anatomy & Physiology.

So, what kinds of conditions has tPBM been used to treat?

There have been a small number of human studies looking at tPBM’s effectiveness in treating acute stroke, but so far the results haven’t been strong enough to create widely-usable treatment plans.

This animation shows the difference between an ischemic stroke and a hemorrhagic stroke.  For more animations about physiological processes and common conditions, check out our Physiology & Pathology and Physiology Animations apps.

A series of three clinical trials were conducted in 2007, 2013, and 2014 to assess how tPBM treatment affected stroke patients. The results of the first study, NEST-1, showed that “tPBM significantly improved outcome in human stroke patients, when applied at ~ 18 h post-stroke, over the entire surface of the head.” The next trial, NEST-2, showed that patients who suffered moderate to moderately-severe strokes benefitted from tPBM treatment, but those who had suffered severe strokes did not. NEST-3 was terminated early because it didn’t look like its results would achieve statistical significance.

What do these results tell us? They show that there is definitely proof-of-concept for tPBM treating stroke, especially in patients with less severe strokes. However, there’s still a lot for scientists to figure out in terms of designing an effective treatment protocol. Should certain brain areas receive light while others do not? How many treatment sessions do patients need? These are only some of the factors that will need to be addressed in future research.

Naeser et al. 2014 treated eleven mTBI patients using NIR applied to the scalp using LEDs. They found that after receiving ten minutes of NIR therapy three times a week for six weeks, the participants’ performance on neuropsychological measures (of inhibition, inhibition switching, and verbal learning and memory) improved. The patients also had improved sleep, and their families reported that their social function had improved.

Hipskind et al. had similar success in their 2018 study. The twelve participants were all veterans aged 31-56 who underwent a course of treatment involving 3, 20-minute NIR therapy sessions a week for six weeks. In addition to showing improvement on 14 of 15 measures of cognitive function (including memory, concentration, and processing speed), all the patients showed “significant regional cerebral blood flow increases” as measured by a SPECT scan.

There are a couple things to note about these studies before we draw any conclusions about how good a treatment NIR light is for mTBI. First, both studies had very small sample sizes. In general, a larger sample size means a more reliable result, so although these studies might show proof of concept, they should definitely be followed up with larger-scale studies.

Also, it would have been interesting to see a more quantitative measure of participants’ changes in sleep and social functioning. Actigraphic wristbands, like the ones used in a study we’ll talk about later, would be useful for monitoring participants’ sleeping habits. A standardized questionnaire for families would be a potential way to get objective data on social functioning.

Lastly, near-infrared light is a useful brain imaging tool. fNIRS (functional near-infrared spectroscopy) is often used in neuroimaging studies of babies and young children because it’s noninvasive and portable—participants just have to wear a cap with LEDs embedded in it, instead of lying in an MRI scanner or undergoing the extensive setup required for EEG imaging (this is usually messy, requiring electroconductive gel or a salt-water solution).

It may not be easy being green, but green light could very well improve the lives of migraine and chronic pain sufferers. How? Let’s start with the relationship between light and migraines.

In this animation, you can see the dilation of blood vessels surrounding the brain during a migraine. For more animations about physiological processes and common conditions, check out our Physiology & Pathology and Physiology Animations apps.

The fact that people are sensitive to light during migraine headaches is pretty common knowledge. In science-speak, the phenomenon of light making a headache worse is referred to as photophobia, and around 80% of migraine sufferers with normal eyesight experience it.

A 2016 study in Brain found something fascinating, though: green light is less likely to exacerbate a migraine headache than blue, white, red, or amber light. In fact, low-intensity green light caused around 15% of the patients in the study to report decreased pain (compared to a baseline condition). At medium intensity, green light caused an increase in pain of less than 5%, as compared to the other types of light, which caused a 15-20% increase in reported pain.

Why might green light be less aggravating to or even help lessen the pain of migraines? The authors of the 2016 study measured the activity of the light-sensitive cells in the retina (rods and cones) using electroretinography when the patients were not experiencing headaches, and they found that the electrical signals produced by these cells differed based on the color of light in a way that correlated with the patients’ pain reports. 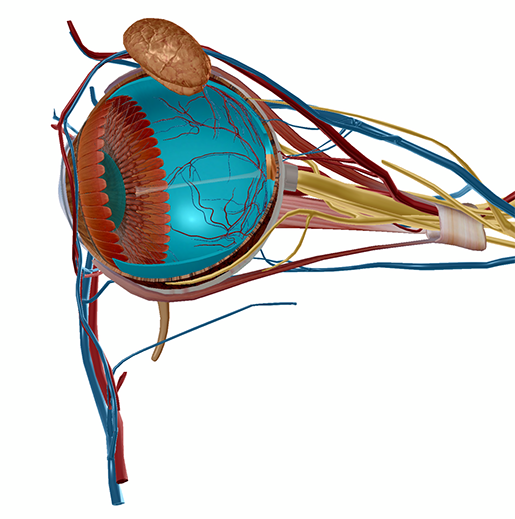 The lens and retina of the eye. Image from Human Anatomy Atlas.

Their results led them to conclude that the “activation of cone-mediated (but not rod) retinal pathways can play a role in the weak ‘photophobic’ effects of green and strong ‘photophobic’ effects of white, blue and red.” (Here’s a bonus interesting fact—blind migraine sufferers with degenerated rod and cone cells are more sensitive to blue light.) 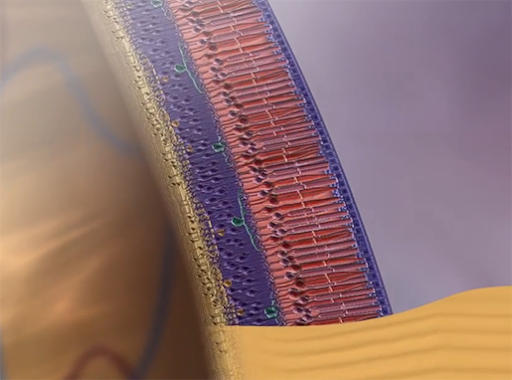 Rod and cone cells of the retina. Rods detect dim light, but not color, and cones detect bright light and color. Animation screenshot from Anatomy & Physiology.

Results like these have encouraged researchers like Dr. Mohab Ibrahim from the University of Arizona to look into using green light as a therapy for migraines and chronic pain. Back in 2018, he conducted a study in which 25 patients with migraines and other types of chronic pain were exposed to green light in the lab every day for several weeks. Dr. Ibrahim told NPR that as a result of this treatment, “on average, people experienced a 60% decrease in the intensity of their migraines and a drop from 20 migraines a month to about six.” However, this statement is just a preview: the results of this study have not yet been published, so we’ll have to wait for that to happen before making any real conclusions about the effectiveness of green light therapy.

As exciting as these results are, having to sit in front of a light box at home, or go to a lab to do so, is time-consuming for patients. A clinical trial currently being conducted by researchers from Duke University, led by Dr. Padma Gulur, is looking at the possibility of letting patients take their light-therapy on the go with blue, green, and clear glasses. The participants in this study are either suffering from pain after a thoracic surgery or are currently being treated for fibromyalgia.

Hopefully, we will soon see some new drug-free pain treatments as a result of studies like these!

Blue light may be aggravating to people with migraines and mess with our sleep at night, but a preliminary study from the University of Arizona College of Medicine shows that blue light therapy could be helpful to people suffering from concussions.

According to the study’s lead author, Dr. William Killgore, “morning blue light exposure has been shown to lead to improved circadian rhythm of the body's sleep-wake cycle, which is linked to improved sleep, better mood and daytime alertness.” Therefore, the fact that depression is a common symptom of concussion means that getting blue light in the morning might help improve mood in people who’ve suffered from concussions.

This animation shows a concussion caused by a head injury during football. Following the initial impact, the brain slides around inside the skull, which results in swelling.  For more animations about physiological processes and common conditions, check out our Physiology & Pathology and Physiology Animations apps.

The study’s 35 participants were around 26 years old on average and had been diagnosed with concussion in the last 18 months.

Those who had received the blue light treatment had lower scores on the Beck Depression Inventory, improving their pre-treatment scores by around 22%. The participants in the amber light group had slightly higher scores after treatment (indicating a higher level of depression), by approximately 4%. The blue light group also showed improvements in “sleep disturbance, fatigue, concentration, restlessness, and irritability,” which are also symptoms of concussion.

This is consistent with earlier research, conducted by the same University of Arizona group, that showed the effects of blue light therapy on the sleep patterns, daytime sleepiness, and executive functioning abilities of people with mTBI. After 30 minutes of morning blue light exposure every day for six weeks, mTBI patients were less sleepy during the day and showed improvements in sleep timing and executive functioning when compared to a group of mTBI patients treated with amber light. Structural and functional neuroimaging also showed increased thalamic volume and structural and functional thalamocortical connectivity in the blue light treatment group. 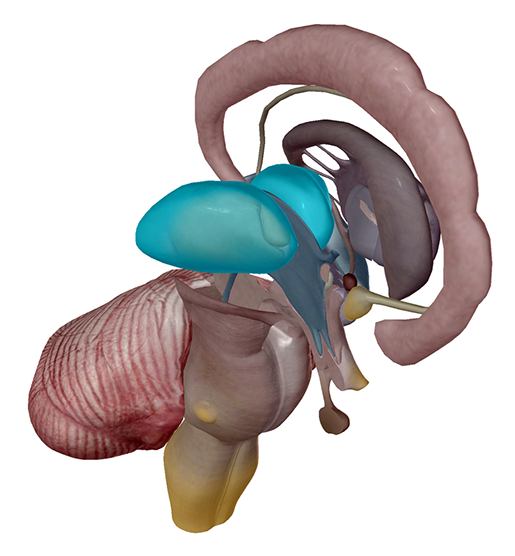 These studies were both fairly small, and only meant to show proof of concept, but it will be fascinating to see what further research illuminates about blue light therapy! (Sorry, you know I can’t resist a good pun.)

So, what can we take away from all these studies? Light therapy research is mostly still in its early stages, but scientists are actively conducting studies and clinical trials to investigate how exposure to different wavelengths of light can help patients. Hopefully, as studies in this field grow from proof of concept to specific treatment plans and larger trials, we will soon see the extent to which light therapy could prove helpful to patients.

Based on these initial studies, you might say that light therapy research has a bright future! (I’ll see myself out.)