I love the trapezius muscle. I know, I know, I say that about every muscle I write about, but it's true! The trapezius is so cool. It's like wearing a superhero cape all the time. It's the reason that, when people ask me what I do for a living, I tell them I'm Batman.

The trapezius is named for its trapezoidal shape. It is flat and broad, covering the upper back and part of the neck and shoulders, but it's actually part of the thorax.

Let's take a look at your built-in cape. If you have Muscle Premium, launch the trapezius view and follow along!

When you shrug your shoulder, for example, you're elevating the scapula. Scapula elevation is exactly what it sounds like: it's the act of lifting the scapula. Shrug your shoulders now. Pretend I just asked you the answer to the Riemann Hypothesis (which no one knows, by the way). The trapezius, along with the rhomboideus major and minor, and levator scapulae, work together to elevate the shoulder.

Scapula adduction, or the act of moving your arm and shoulder backwards, involves the trapezius and the rhomboids.

The trapezius also acts in head/neck extension, or the act of tilting your head back. This is more to do with where the trapezius originates, as the shoulders do not move.

The trapezius has multiple origin and insertion points—it's simply too big not to.

It originates on the occipital bone, the ligamentum nuchae, and the spinous processes of T01–T12. The trapezius inserts on the lateral third of the clavicle, as well as the acromion and scapular spine of the scapula. 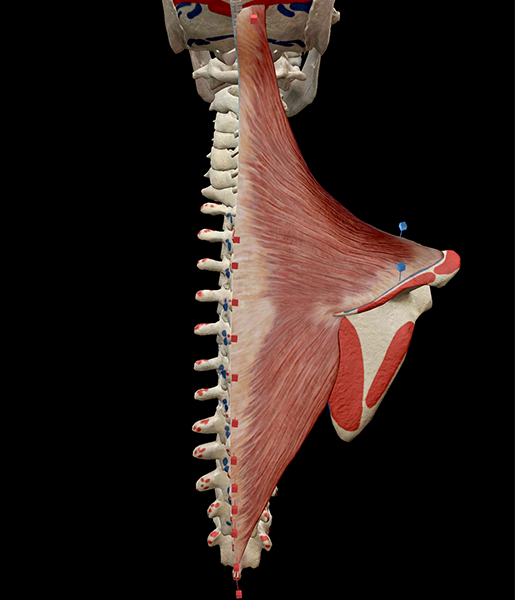 Since the trapezius is such a large muscle that covers so many areas, it stands to reason that it would be injured easily. And a trapezius injury can be a real pain in the neck—literally. What cause trapezius pain?

Trapezius strain is the most common injury to the muscle and can occur by all kinds of trauma, including car accidents, whiplash, or contact sports. People who lift weights or carry heavy objects for a living are also more likely to develop a trapezius strain. 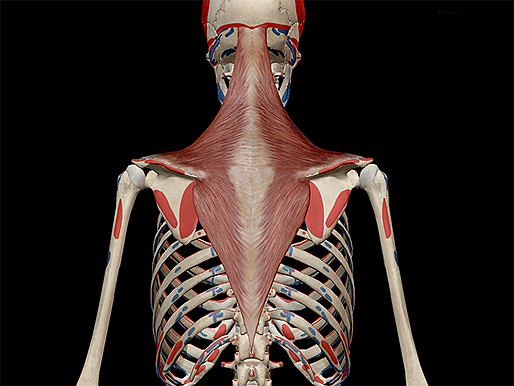 A strain is when the muscle or its connective tendons stretch and/or tear (and we all know how I feel about that). Common symptoms of a strained trapezius are stiff, aching neck with dull pain and tightness in the upper portion of the back, as well as acute pain that is commonly described as feeling like knots.

The easiest method of treatment is the RICE treatment:

Over-the-counter pain medications, such as ibuprofen or Tylenol™, can also help to reduce pain and swelling.