The gastrocnemius, soleus and plantaris muscles make up what is most commonly known as the "calf muscle".

I had over 600 muscles from which to choose when I first started writing this thing. I can hear you now: "How did you ever choose from that many muscles?" Well, dear reader, I am very much a visual person, so my interest is piqued by things that look awesome. The thing about muscles is that some are more visually appealing than others. When you look at the full muscular system, some muscles really catch the eye’s attention more than others.

To the untrained eye, it might look like three separate structures, but the gastrocnemius muscle is part of an interesting arrangement.

The gastrocnemius (pronounced gas-trok-neem-ius; even its name is cool) is a muscle in the posterior compartment of the distal leg. It is a two-headed muscle (like the biceps brachii), which means the muscle begins or originates at two separate points and then converges to insert on one point. The gastrocnemius, along with the soleus and plantaris muscles, make up the triceps surae, Latin for "three-headed calf," more commonly known as the calf muscle.

What does the gastrocnemius do?

Lift your leg out straight and then bend it at the knee. Now straighten your leg again. The action in which your leg is bent back toward your backside is called knee flexion, and it occurs every time you walk. Have you ever jokingly locked your knees and walked without bending them? Not an easy feat. When you flex your knee, the gastrocnemius acts with the hamstrings, which are the muscles of the posterior upper leg, and the popliteus to bend it at the joint. 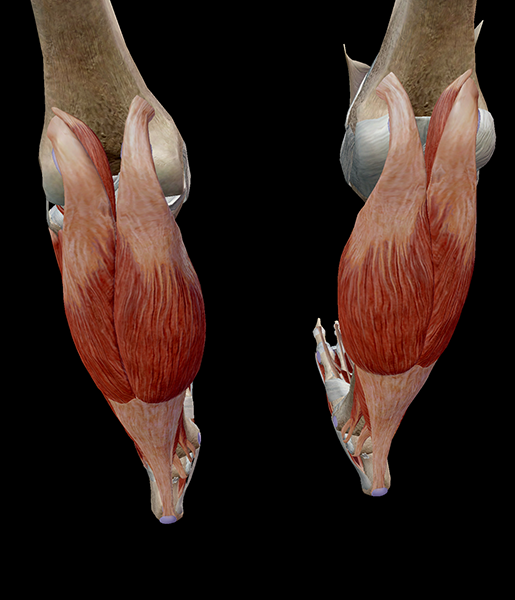 The gastrocnemius is also involved in plantar flexion. The best way to describe this action is to imagine your foot on a gas pedal, pressing and releasing it, or standing on your tiptoes. The action of moving your whole foot up and down at the ankle joint is plantar flexion. The Achilles tendon (along with other muscles) pulls up on the calcaneus, or releases it back to its resting state.

Like I said before, the gastrocnemius is one cool-looking muscle. The two heads, in particular, are what draws the eye. They remind me a bit of ram horns in the way that they curl inward slightly. 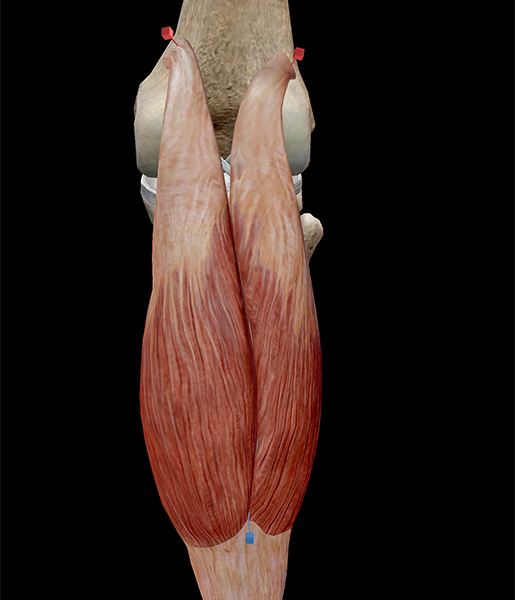 Gastrocnemius Strains, Tears, and Other Injuries

I don't know how squeamish you are, dear reader, but not a whole lot phases me. I'm around anatomy all day and there are a million and one ways you can injure yourself. But for some reason, one of the most common injuries to the gastrocnemius gives me the willies. Brace yourself. Ready? Okay, here goes.

A calf strain is a particularly common injury to athletes. It is a tear to either the gastrocnemius or the soleus, and is most common in the medial head of the gastrocnemius. The muscle is at high risk for tears because it crosses two joints (the knee and the ankle) and has a high density of fast-twitch muscle fibers (which gives it the ability for powerful "bursts" of movement). Sometimes when the gastrocnemius is being overworked, the muscles will contract or snap quickly, like a whip, which is why gastrocnemius strains are sometimes called "snap of the whip." Symptoms include sudden, sharp pain, bruising, and an inability to walk well.

I know, it doesn't seem like something that would make me shudder, but the thought of muscles ripping makes me queasy.

Another common ailment (not so much an injury) is a cramp to the gastrocnemius. Have you ever done a full body stretch and your calf muscles seize suddenly? The gastrocnemius is prone to spasms, which are painful contractions of the muscle that won't subside for several minutes. While the exact reason for this is unclear, cramping and spasms are sometimes caused by dehydration, poor blood flow, and short range of movement. These spasms are more common at night; I can't tell you how many times I've woken up suddenly with cramped calves. It's one of the worst pains I've ever felt.

Overuse of the gastrocnemius can also cause swelling and pain.

So, long story short: ease up on your poor gastrocnemius and you'll be good to go.