The other day, I let my ten-year old niece play with Muscle Premium on my phone (while I watched cartoons). She kept making the model spin—around and around and around, like a ballerina, until she abandoned it for the muscle actions.

"Auntie," she said, and then didn't follow up with anything, completely engrossed in Elbow Flexion. When I prompted her, she looked up at me and whispered, as if confessing a secret, "Is it supposed to hurt?"

I asked her what she meant. She pointed to the moving model.

"Do bones rub against each other like that all the time? Because I feel like it should hurt."

I watched the animation for a bit—the olecranon of the ulna slid against the humerus's olecranon fossa, back and forth, flexed in a continuous loop. It did look a bit like they were rubbing together. Actually, if there wasn't something there acting as a cushion, moving the joints would be incredibly painful. Luckily, we're not that bad off.

"It doesn't hurt," I began, settling back to finish The Legend of Korra, "Because you have little pillows called bursae inside you that stop your bones from rubbing like that."

She turned her attention back to the TV and waited until the end of the episode to ask more. (My niece is polite like that.)

That was an actual exchange between me and my niece Em, who has an affinity for all things science and interesting. She's awesome.

Anyway, what I told her was the truth: bursae prevent our bones and muscles, particularly in the joints, from rubbing together and creating painful friction. Imagine trying to bend your knee without something to cushion the movement. Talk about ouch, right? 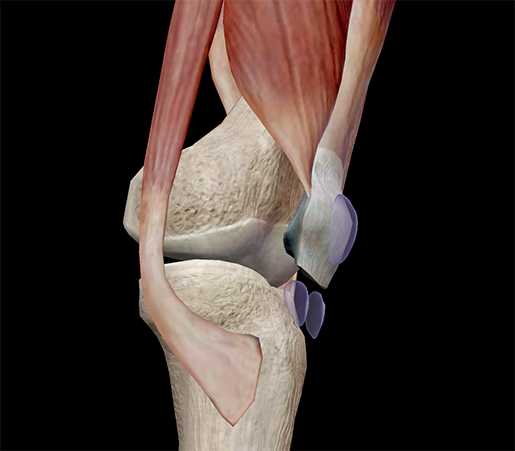 See those purple lumps in the picture? Those are bursae. They live between bones and bones, or bones and muscles, or muscles and skin, serving to prevent friction at points of stress throughout the body. In the picture, you can see the bursae are either prominently displayed (on top of the patella) or partially hidden between bone and muscle. Think of how often you move and bend your knees—I'm doing it right now, and I'm just sitting! It would be a much more painful action without the bursae there to cushion things.

Most of the bursae in the body are synovial: thin-walled sacs interposed between bones, muscles, and tendons. The lining of a bursa contains a capillary layer of synovial fluid, which provides two lubricated surfaces that enable freedom of movement. Synovial bursae tend to be located in your joints, like your knees, feet, and shoulders.

There are also adventitious, or accidental, bursae. These occur in soft tissue over bony prominences, usually because of repeated pressure or shearing.

An example of an adventitious bursae is a bunion, which is a deformity of the big toe. Wearing ill-fitting shoes can sometimes force the big toe inward towards the other toes. The bursa at the metatarsophalangeal joint becomes swollen, but the biggest issue is the normal part of the head of the first metatarsal bone is tilting sideways and sticks out at its top. This creates a large bump or prominence.

Subcutaneous bursae lie between the skin and a bony process, like the aforementioned olecranon of the elbow. 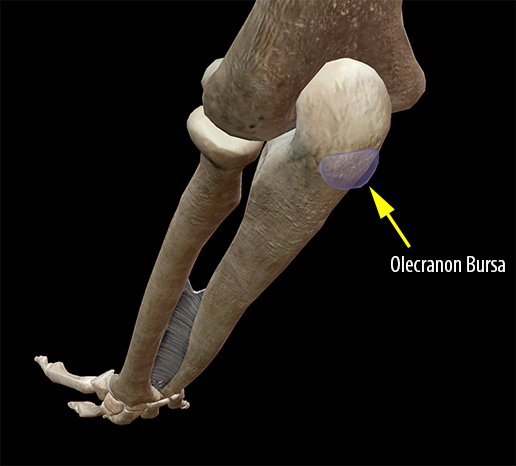 You've probably spent enough time on this blog to know what the suffix –itis means, so you won't be surprised when I say that bursitis is the inflammation of a bursa. When the bursae become inflamed, their gliding ability is lost, which can be painful. An inflamed bursa is usually the result of trauma, overuse, or infection. Even something as simple as lifting something heavy can bring it on.

The joints of the hips, elbows, and shoulders are normally the areas affected by bursitis, but it can occur anywhere (inflammation of the bursae in the knee is known as Washmaid's Knee).