Did you know that Framingham, Massachusetts is home to both Visible Body HQ and one of the most important longitudinal medical studies in human history? That’s right: the Framingham Heart Study is our neighbor.

The early 20th century saw a shift in causes of death. After World War II, more Americans began dying of cardiovascular disease and less died from infectious disease. During this time, the medical community was more preoccupied with treating disease than preventing its cause, and experts couldn’t account for the marked increase in cases of cardiovascular disease.

Enter Joseph Mountin, a United States Public Health Service officer and Assistant Surgeon General. Mountin was considered by many to be the founder of the Communicable Disease Center, which later became the Centers for Disease Control.

Mountin recognized the need to study the cardiovascular disease epidemic. He collaborated with Harvard cardiovascular disease epidemiologist David Rustein to set up a long-term study in Framingham, Massachusetts, a factory town near Boston. Framingham was chosen because the researchers felt it represented the American population, and because the town participated in the Framingham Tuberculosis Demonstration Study in the 1910s. Mountin then appointed the first director of the FHS, Gilson Meadors.

The study’s first cohort consisted of 5,209 people, which was about 60% of the adult population of Framingham at the time. Historically, epidemiological studies had small numbers of female participants or excluded them altogether, but more than half of the first cohort’s participants were women.

In the early days of the study, it became a project of the National Heart Institute (now called the National Heart, Lung, and Blood Institute), and it has been sponsored by them ever since. Boston University researchers are contracted to carry out the study. 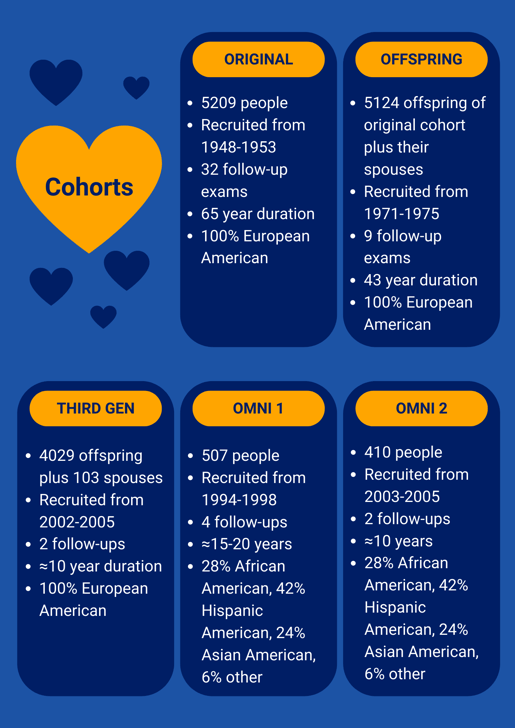 Each cohort receives examinations, tests, evaluations  of their medical histories, and in some cases, cognitive testing and brain imaging. Over more than seventy years, the FHS has amassed an extensive database of medical information on cardiovascular health and beyond, including a genetic database.

Because the FHS is a family-based study, it can track heritability and other genetics-related characteristics. Since 2007, FHS participants are genotyped with array-based and whole-genome sequencing platforms, and genetic and genomic data has generated findings on topics from lipids to the molecular epidemiology of cardiovascular disease.

Due to its size and the length of the study, the FHS is hailed as the “crown jewel of epidemiology.” Much of what we know about cardiovascular risk factors comes from the FHS—even the term “risk factor” was popularized by FHS researchers.

Next, we’ll go through four of the FHS’s key findings that changed our thinking about heart health.

Want a refresher on cardiovascular disease before we dive in? Check out this video explaining the most common heart disease (coronary artery disease) and heart attacks.

Nowadays, it goes without saying that smoking kills. We know that smokers tend to die ten years earlier than nonsmokers and that right now, more than 16 million people in the US have a disease caused by smoking.

But back in the 1960s, when 42% of adults in the US smoked, experts were unsure if smoking was a threat to health, particularly cardiovascular health. Studies at the time focused on smoking’s relationship to lung cancer rather than heart health.

In 1959, a FHS researcher even wrote that they saw no relationship between smoking and coronary heart disease.

We now know this to be false, thanks in part to the FHS. Through combining FHS cohort data with data from a cohort from Albany, New York, experts determined a clear relationship between smoking and heart health. This and other FHS-related studies proved the link between smoking and:

We now know a lot more about tobacco and health, but we still can learn more from the FHS. A study published in 2019 looked at data from 8,770 people from the Original and Offspring cohorts. They found that if they quit, even heavy smokers can reduce their risk of cardiovascular disease by almost 40% within five years. Within five to ten years, a heavy smoker could reduce their risk to that of a nonsmoker.

We now know that atrial fibrillation (which is when the heartbeat is too slow, too fast, or irregular) increases the risk of heart failure and stroke; the FHS was one of the first to illustrate this back in 1978.

The FHS was also one of the first to outline the major risk factors for atrial fibrillation. They later developed a tool to estimate the risk of developing atrial fibrillation, which contributed to the Cohorts for Heart and Aging Research in Genomic Epidemiology (CHARGE) risk score, which has proven to be more predictive than other models.

The FHS reports that atrial fibrillation is also associated with impaired cognitive performance and cognitive decline.

Researchers analyzed data from three generations of FHS enrollees and found that over the past 45 years there has been a decline in atrial fibrillation-related deaths. As Dr. Niklas Vinter, one of the paper’s authors, put it, “The Framingham Heart Study is one of the only studies in the world that allows studying such temporal trends.”

Before the FHS was founded, hypertension was not considered to be connected to heart disease. In fact, it was commonly thought that elevated systolic blood pressure was a normal part of aging. For example, President Franklin Delano Roosevelt’s blood pressure in 1937 was 162/98: at the time, this was not considered cause for concern, but nowadays, that would be considered high. Four years before the FHS started, FDR died of a cerebral hemorrhage.

The FHS was also one of the first groups to describe blood pressure under new criteria from the Conference of Longitudinal Cardiovascular Studies that defined normal, borderline, and elevated blood pressure.

The FHS paved the way for further research and for the development of antihypertensive medications, which has helped address cardiovascular disease.

They found that participants who had a parent with a stroke were three times more likely to have one themselves. They also found that people with higher levels of serum homocysteine had a higher risk of dementia.

The first FHS publication on stroke was in 1965, and it identified that elevated blood pressure was the highest risk for both infarction and hemorrhagic stroke. Subsequent publications showed skeptical physicians that non-rheumatic chronic atrial fibrillation increases the probability of stroke.

The FHS has been able to follow participants with dementia for multiple decades, giving them insight into the development of dementia. Participants can even donate their brains to the program after they die for further study—over 150 brains have been donated to date.

With this data, researchers are able to develop statistics on incidencies and lifetime risks.

A 2016 study even found that the number of FHS participants with dementia has declined over the past thirty years!

The future of Framingham

The FHS continues to grow its data set and strive for new discoveries in cardiovascular health. In recent years, they’ve advocated for a more nuanced way of calculating risk for individuals that takes into account a patient’s unique medical history as well as social determinants of health. They’ve even developed an app to record blood pressure and physical activity of participants!

In 2022, the FHS came forward with great news: as time goes on, participants in the FHS are living longer and having their first cardiovascular disease events later in life. Cardiovascular disease is still a serious threat, and the overall risk is high, but thanks to new insights from the FHS and medical and technological advances, we have made great progress.

Want to learn more about the heart? Check out this in-depth look at the structures that make up the heart in the Build a Heart eBook!