How Does Anesthesia Work?

It’s difficult to imagine undergoing surgery without anesthesia, and it would have been impossible to develop modern surgical techniques without it. Today on the Visible Body Blog, we’re talking about the three kinds of anesthesia—local, regional, and general—and how each kind works.

First, let’s look at how anesthetics came to be used in medicine.

Way back in 1540, Valerius Cordus synthesized ether, the first inhalational anesthetic, which he called “the sweet oil of vitriol.” Joseph Priestly discovered the properties of nitrous oxide—also known as laughing gas—in 1772, but both laughing gas and ether were used for entertainment until the mid-nineteenth century. Ether was basically the party drug of the time, and at exhibitions, balloons of nitrous oxide were passed around, and onlookers paid a fee to watch the intoxicated make fools of themselves.

There are a few competing claims on who pioneered anesthetic for surgical use.

In 1842, physician Crawford Long of Jefferson, Georgia removed a neck tumor from a man under ether. He spent the next few years experimenting with surgery under anesthesia, but did not publish his work until he learned about competing claims and wanted credit.

In December of 1844 in Hartford, Connecticut, the dentist Horace Wells’s curiosity was sparked when his friend injured his knee on laughing gas but didn’t notice the pain until the gas wore off. He began using nitrous oxide on some of his patients, and the next month, he gave a public demonstration of the use of nitrous oxide in tooth extraction. The gas bag was removed early, and the patient cried out in pain. Wells was booed by the audience.

In 1846, after experimenting with the use of ether on animals, the dentist William Thomas Green Morton used ether during a tooth extraction. In October of that year, Morton gave a demonstration of anesthesia for surgery at what is now called “The Ether Dome” at Massachusetts General Hospital, revolutionizing surgery. 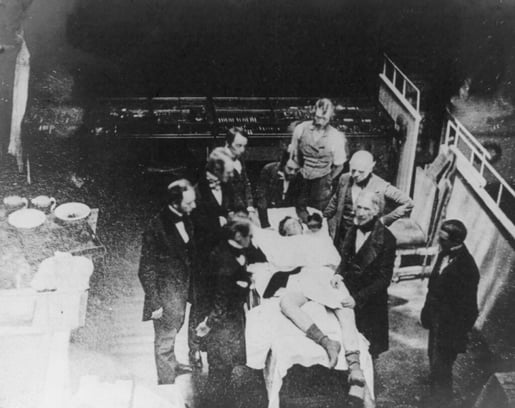 A 1850 reenactment of the famous 1846 Ether Dome surgery. Photo via The Public Domain Review.

… But even Morton’s claim is contested, because the chemist and geologist Charles T. Jackson maintained that he gave Morton the idea in the first place.

It’s debatable who invented anesthesia, but it’s not debatable that it’s a better option than giving patients alcohol, cocaine, or just telling them to toughen up.

Local anesthetics are those that are injected or applied topically to numb a specific, small area; the drugs do not travel far.

Neurons communicate with each other through neurotransmitters, and anesthetics block the nerve cells’ receptors so that neurotransmitters cannot bind to them. They block transmissions in the peripheral and central nervous systems. Autonomic impulses are blocked first, then sensory impulses (pain and temperature sensation, followed by touch and pressure), and then motor impulses.

How long does local anesthetic last? This varies depending on a number of factors, like which drugs are being used and how they’ve been prepared—for example, some drug combinations are designed to be extended-release. If the area has a higher blood supply, the anesthetic will wear off sooner.

Epinephrine is often added to local anesthetic solutions. It’s a vasoconstrictor, meaning it narrows blood vessels, and it helps the anesthetic last longer because it delays its removal. Vasoconstriction also helps control bleeding during surgery.

Fun fact: The local anesthetic you get at the dentist’s isn’t actually Novocain. The chemist Alfred Einhorn first synthesized procaine in 1905 and gave it the trade name Novocain; he wanted it to be used for amputations, but dentists found it more useful than surgeons did. By the 1950s, however, almost all dentists had shifted away from using Novocain towards lidocaine, which acts faster, lasts longer, and is less allergenic than Novocain.

Regional anesthesia results when anesthetic drugs are injected near a group of specific nerves, numbing a larger area than a local anesthetic. It typically lasts for 4-24 hours.

In addition to use during surgery, regional anesthesia can be used for pain management—for example, you might receive both regional and general anesthesia during a surgery so when you become conscious again, you undergo less pain.

There are several different kinds of regional anesthesia; two common and similar types are spinal and epidural anesthesia, used for operations below the navel like gynecologic procedures, hernia repairs, and hip surgeries.

In spinal anesthesia, a small needle is inserted into the subarachnoid space, which is where the cerebrospinal fluid is located.

In epidural anesthesia, a larger needle is inserted into the spine, placing a catheter into the epidural space between the vertebrae and the spinal cord. Drugs can then be pushed through the catheter into the body. Epidurals are commonly used to alleviate pain during childbirth and for Cesarean sections. 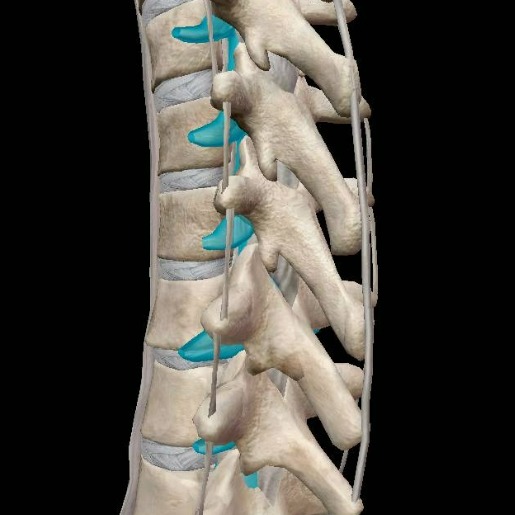 The epidural space is located between the dura mater (in blue) and the vertebral wall. Image from Human Anatomy Atlas 2022 +.

Spinal anesthesia is one injection that gives pain relief for a limited amount of time, but an epidural catheter can provide anesthesia for a longer period of time.

In some patients, like those who are older or sicker, epidural anesthesia may be a better option than general anesthesia because it kicks in more slowly, leading to less hypotension and reflex tachycardia. The concentrations and types of drugs used can be adjusted—a patient could be able to walk around or could be completely unable to move below the waist.

Most anesthetics used today are given by inhalation. Under general anesthesia, your awareness is gone and you experience no pain, but your vital functions like breathing continue.

Luckily, the fourth stage of anesthesia rarely occurs! For patients without major disease, general anesthesia's mortality rate is about 1 in 100,000.

Photo via Pixabay on Pexels.

Here’s something that might surprise you: we know less about how general anesthesia works than we do about local and regional anesthesia.

General anesthetics bind weakly and affect many different proteins, which has made it difficult to study how they bind and to which proteins. This means we don’t have a great understanding of the structural nature of these drugs—in the past, we’ve thought that they might bind to lipids rather than proteins.

Interested in medical history? Read “Inside the Cadaver Lab Part 1: The Past, Present, and Future of Cadaver Dissection” on the Visible Body Blog!

Want to become an anesthesiologist or nurse anesthesiologist? Check out ABCs of Anesthesia, a YouTube channel with hundreds of hours of content on a variety of anesthesia-related topics.

Curious about the history of pain management in childbirth? Try “In 1914, Feminists Fought for the Right to Forget Childbirth” on Atlas Obscura.