Spring is in the air! And if you live in the northeastern US, pollen soon will be, too. This means that, despite the warm weather, people who get seasonal allergies—also known as “hay fever” or allergic rhinitis—might not be so keen on spending time in the great outdoors. Symptoms of hay fever usually include a runny nose, sneezing, and itchy, watery eyes. For most, these symptoms aren’t dangerous, but they sure are annoying!

In this post, we’ll take a look at this widespread and very unpleasant springtime experience and talk about what happens in the body during an allergic reaction, what some of the most common seasonal allergens are, why some people have more allergies than others, and why evolution saddled us with allergies in the first place.

1. Allergies (seasonal or otherwise) happen when the immune system reacts to a seemingly harmless substance.

Allergies are often described as “the immune system overreacting.” Let’s take apart what this means. An allergic response is likely seen as “overreacting” because the body’s defense system has identified some substance, usually a harmless one, as a threat to be removed.

The best way to unpack that is to look at the cellular level, where we find a protein called Immunoglobulin E, or IgE. IgE is an antibody, which means that it can bind to a specific antigen (a foreign substance such as a bacterium or allergen) to tag it for removal. Sometimes, when the body encounters an otherwise harmless substance, such as pollen, the immune system identifies it as an invader, prompting the production of IgE antibodies. The left side of the illustration below shows how antibody-mediated immunity (the type of immune response in which IgE is involved) works.

In an antibody-mediated response, part of the adaptive immune system, B cells produce antibodies.
Illustration from A&P.

These antibodies circulate throughout the body and are found by mast cells. Mast cells can mostly be found in the body’s mucous membranes, like the inside of the nasal cavity (the nasal mucosa). They attach the IgE antibodies to their surface to use to detect the allergen later. When the mast cell and its antibodies encounter the allergen, the mast cell releases histamine.

You might recognize histamine from the kind of allergy medication it’s related to—antihistamines. Antihistamines are used to treat many types of respiratory-related allergies because the release of histamine by mast cells causes the symptoms characteristic of hay fever. Histamine makes blood vessels dilate, causing inflammation. If you’ve breathed in an allergen like pollen from the air, this inflammation occurs in your nasal mucosa and sinuses, causing itching and fluid leakage (that is, the typical itchy, runny nose allergy sufferers know all too well). Your eyes might get itchy and watery, too.

In addition, the release of histamine causes sneezing by stimulating nerves in the nose. 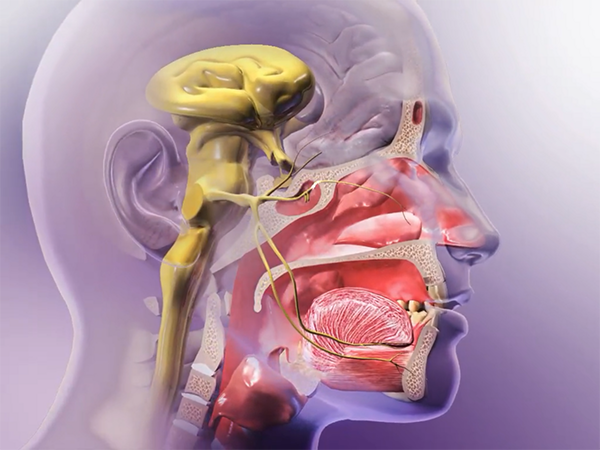 A branch of the 5th cranial nerve (aka the trigeminal nerve) carries signals back to the brain, triggering a sneeze. Animation screenshot from A&P.

Antihistamines block these types of actions from histamine, at least partially relieving the runny nose, sneezing, swelling, and itching. (Hooray!) Other common types of medications for alleviating seasonal allergy symptoms are nasal decongestants, which decrease congestion, and corticosteroid nasal sprays, to decrease inflammation inside the nose.

2. Pollen is what usually causes seasonal allergies, but the source of that pollen varies based on location and time of year.

Pollen is an important part of the sexual reproduction process for flowering plants. When pollen produced by one flower lands on a particular part (the stigma) of another flower of the same species, fertilization can occur and seeds can be produced. Some plants can self-pollinate, while many others rely on the wind or on animals like bees or butterflies to cross-pollinate.

Different plants release pollen at different times of the year, or even different times within a particular season. On my college campus, for example, the trees coming back into bloom in late April and early May meant that I could predictably find myself with very unhappy sinuses during final exams every year! Here in the US, the usual suspects for seasonal pollen allergies include tree pollen in the spring, pollen from grasses and weeds in the summer, and ragweed in the fall. Trees whose pollen triggers allergies include oak, elm, alder, birch, beech, poplar, ash, and olive. As for grasses, Bermuda, timothy, sweet vernal, orchard, and Johnson grass are often to blame. Russian thistle and English plantain are common allergy-triggering weeds. 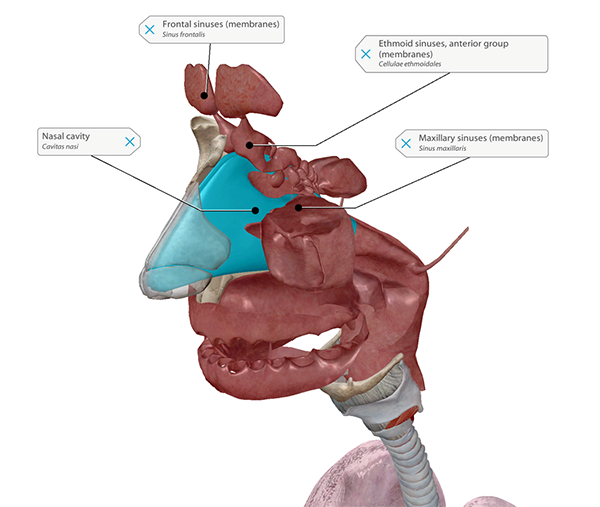 Allergic responses to pollen in the air irritate the lining of the nasal cavity and sinuses.
Image from Human Anatomy Atlas.

Another common allergen that can show up in the spring is mold (yuck). The airborne spores of several types of indoor- and outdoor-dwelling mold can cause allergic reactions. Mold can be particularly prevalent in the spring because of the weather warming up combined with increased rainfall.

3. Genetic and environmental factors affect the likelihood of someone having allergies.

Seasonal allergies are incredibly common. Results from the 2018 National Health Survey indicate that hay fever affected around 19.2 million adults (around 7% of the population) and 5.2 million children in the US that year.

When in the midst of sniffling and sneezing, those of us with allergies sometimes wonder “why me?” The answer is complicated, involving a number of different factors.

We can at least partially blame our genes. People whose parents have allergies are more likely to suffer from them (note that this doesn’t necessarily apply to a specific allergy, just to the likelihood of being allergic to something in general). This isn’t a hard and fast rule, though. There are plenty of people who suffer from allergies but don’t have a family history of them.

The environment people are raised in is also thought to figure into the likelihood of allergies. People who grow up on farms or have large families generally have fewer allergies. Allergies are also less common in developing countries. The “hygiene hypothesis” gives a possible explanation: people whose immune systems run into lots of different microbes or potential allergens when they’re young are less likely to develop allergies. Of course, this isn’t a hard and fast rule, either. It’s likely a combination of genetic and environmental factors that determines whether or not we’ll be saying “yahoo” or “ah-choo” when spring comes around.

By the way, if you live in a city and are still getting exposed to lots of pollen, here’s a cool article from Atlas Obscura explaining why our preference for male trees in urban areas has made things worse for seasonal allergy sufferers.

4. There are many hypotheses as to why humans have allergies in the first place.

But maybe you’ve expanded your existential questioning to include our entire species. Why do we have allergic reactions? Is it because our immune systems secretly love to betray us? The short answer is no. Our immune systems are just doing their jobs and trying their best to protect us.

Human life is quite different now than it was thousands of years ago, but even in ancient times, there are accounts of seasonal allergies—for example, Chinese doctors 3000 years ago wrote about a “plant fever” in the fall that caused runny noses. Allergies to insects and foods were also documented in ancient Egypt and Rome, respectively.

Today, many scientists think that instead of just overreacting to harmless substances in our environment (or our food), allergic reactions involving IgE must have given us some kind of advantage further back in our history.

One such hypothesis involves just about the creepiest thing I can imagine: parasitic worms! The main idea of the parasitic worm hypothesis is that back in the day, our ancestors encountered a lot more hookworms and tapeworms than we do now. The response that creates IgE antibodies could have evolved from encountering proteins from these parasites. Today, the same IgE response could be triggered by harmless substances that resemble those proteins.

It’s important to note that our adaptive immune system is just that—adaptive. We need the ability to make antibodies against new substances we encounter, from potentially toxic molecules and parasites to bacteria and viruses. Our B cells generate antibodies based on such substances they’ve encountered before, so it makes sense that sometimes antibodies will be generated against “safe” proteins that happen to look like dangerous ones.

Another, similar potential explanation to the parasitic worm hypothesis is the toxin hypothesis. Because many symptoms of allergies facilitate expelling a harmful substance from the body (sneezing, runny nose, tears, coughing, and even throwing up or diarrhea for food allergies), the IgE allergic response might have evolved to help us expel dangerous pollens, venoms, and/or parasites from our bodies.

In a 2015 interview with BBC Future, immunologist Dr. Ruslan Medzhitov also noted that some allergens actually can cause harm to our body’s cells by irritating their membranes, causing them to rupture, or destroying proteins. This has led him to theorize that allergic reactions are not “the body going haywire,” but a sort of biological “home alarm system.”

Either way, it seems that, like the rest of the immune system, allergies evolved to protect the body from some type of threat. This knowledge on its own certainly doesn’t make dealing with allergy symptoms any less miserable. However, if scientists can figure out exactly how allergies work and why we have them, they can find better ways to treat them, making our lives better and in some cases even saving them!